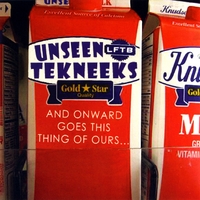 Unseen Tekneeks :: And Onward Goes This Thing of Ours…

If you’re a hip-hop head, groups like Unseen Tekneeks have to be respected. On their latest release, “And Onward Goes This Thing of Ours…,” the duo puts in work lyrically despite their mediocre beats. This is an album ten years in the making; the actual CD says the album is the “5 year anniversary edition.” Nevertheless, underground veterans Cleen and Plural Clarity prove that they understand the elements of hip-hop songwriting; they switch flows, diversify their subject matter, and spit solid wordplay. How artists implement these ideals determines the quality of their albums. Unseen Tekneeks do their best to cover these bases, but they fall short in their execution. Outdated references and occasionally awkward deliveries mar their verses.

The album’s first actual song, “A Few Fat Lines,” features a carefree instrumental. The subtle piano loop and gentle hi-hat highlights the rappers’ flows instead of dominating the track. Both Plural Clarity and Cleen come correct, and their styles complement each other well. Cleen rhymes at a more conversational pace, while Clarity jams bars with numerous syllables. The duo raps lines straight out of high school ciphers, which is a refreshing break from modern rap’s trap-star hysteria. Clarity spits, “You’re played out like my last relationship/ As the beat goes on my whispers amplify like Q-Tip,” while Cleen raps, “Now all rappers know how to say is â€˜pay me more’/ they can’t kick a few fat lines like shoelaces in ’84.”

Unfortunately, the album’s sonic peak is reached on the same track. MC Offbeat lives up to his name on “Box Of Chocolates.” This cut is a jumbled mess, with an ill-advised vocal sample surrounded by clumsy drums and misplaced piano riffs. The dated lyrics begin to stand out more, as well. Cleen and Clarity continue to throw jabs at “iced-out rappers,” even though the “I’m-not-a-rapper-I’m-a-hustler” image has become the target of today’s hip-hop purist. Some of their references are witty, like when Clarity compares opposing rappers’ skills to Gheorghe Muresan (If you’re not an NBA fan don’t ask). Others are just out place, like when Cleen somehow manages to name-drop Motley Crue.

Despite their inconsistent performances, both rappers close out the album gracefully with their own solo tracks. Cleen takes center stage first on “Fake Smile,” which is an 8-minute account of his tumultuous history with Clarity. Rappers rarely rhyme about their bonds with fellow emcees, so it’s unique to hear Cleen be as in-depth as he is. He raps about their meaningful conversations on life after rap, acknowledging that these cats have insecurities, too. He also covers Clarity’s hiatus from rap, and how it derailed Cleen’s plans for them as a group.

“So I understood why, and at the time I decided to let it be
And resumed work on â€˜Old Man Winter’
Thinking when you got settled, you would jump into
The Dirty South underground, and I would support it
But two years went by without one song recorded
I’ll take the reins; I’ll carry the torch
I remember the deep discussions that we had up on the porch
Life after hip-hop, for twelve years we’ve been a crew…”

Plural Clarity takes control of the boards and the mic on the closer, “Happenstance.” He meshes a simplistic piano loop with xylophone samples, a combination that provides the song’s lighthearted vibe. While Cleen drops the song’s chorus, Clarity showcases his ability to rapidly flip words. Even Del Tha Funkee Homosapien would be pleased with his display of jaw gymnastics on this track.

Despite the album’s strong finale, two tracks aren’t enough to erase this album’s drawbacks. For one, Plural Clarity is prone to stumble when he puts his flow on light speed. He’s got skills, but it’s clear that he’s no Chino XL. He has a bad habit of continuing to spit despite being offbeat, which makes him sound like an amateur on occasion. Cleen’s relaxed aura is cool, but his cadence gets boring at times. His lyrics are too straightforward to make such a standard delivery work.

Unseen Tekneeks are on par with most underground emcees, minus the elite tier of Rhymsayers, Living Legends, etc. It’s obvious they love and care about hip-hop, but that doesn’t give them an excuse for their terrible beat selection. The cheap instrumentals make it hard to listen to their message, which is a shame, considering they speak on everything from the spread of AIDS to their own personal stories about the opposite sex. Through it all, their effort is clear; these dudes tried hard to make a good record. If not for all the delays and wack beats, the finished product could have matched up with their original intentions.

Unseen Tekneeks :: And Onward Goes This Thing of Ours...
5.5Overall Score
Music4.5
Lyrics7