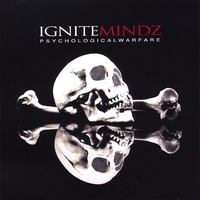 The skull and crossbones on the cover of “Psychological Warfare” are very much a faÃ§ade. Point blank, rapper/producer IgniteMindz is hardly the violent type. He doesn’t binge on comic book-style battle rhymes, nor does he narrate his sadistic sexual preferences and nagging drug habits. Lacking an underlying theme, “Warfare” is a fun record at heart, conducted by a multi-talented, old-school white boy. Its aim would seem simple: hit hard and keep it funky.

Well, at least it starts out like that. In the first few tracks, we see Ignite letting loose, letting nothing complicate his music. The opening “Neoclassicism” is larger than life, a slick banger with soul, where Ignite and guest emcee Imagery exchange playful braggadocio. When the album sticks to this script, it succeeds, especially when the beats bang (and they do), but it can’t help but become seriously sidetracked (and it does).

IgniteMindz the joker and playful emcee, a not-so-complicated rhymer with a voice like a sleepy, blunted bear, is more than tolerable. Songs like “Cheezin” work well because there are no rules (especially with a title soâ€¦interesting), and Ignite seems to acknowledge it. But soon enough, he gets knee-deep in awkward narratives, and becomes caught up in ideas too clichÃ©d to even be relevant. One minute he’s playing the whole “fuck the industry” card, but before the sample can even re-loop he’s talking about eating lobster. Then you have your forced political tracks like “Political Criminals,” where dude even admits to not knowing much about politics before the beat even drops. Like most other rappers who take on the subject, he should probably just keep his mouth shut.

“C.W. Rides Again,” a bizarre concept not far from what Eminem has experimented with, sees Ignite both pointing fun at and taking on the character of a Carolina redneck. It’s extremely strange and even more random, but pretty funny, and proves that he works better when he ISN’T taking himself too seriously.

Yet Ignite continues to attempt things out of his league, whether it be interpolating Marvin Gaye’s untouchable “Mercy, Mercy Me” on “Me, My Pops, and Imagery,” or sampling the same tune Kanye West did for Talib Kweli’s “Good To You” on “Chicas.” Elsewhere, he’s messing around with stuff you simply don’t do; speaking in Spanish several times throughout the album, just for the hell of it (he even says as much), and recruiting an American Idol contestant to sing on “Natural High” (and pointing it out in the track’s intro).

Production is split between Ignite and Segundo, and is generally pretty good from both ends. Only with Ignite, the same ACDC-style, rock-stadium-anthem snare is used throughout, which gets tiresome and nearly puts his producing ability in question. Although his percussion is far from a highlight, he definitely knows how to rock a soul sample, and he makes do with little to work with, crafting good songs even when they sound cheap on the surface. Even still, the overall sound is often a little too unprofessional a little too often.

“Psychological Warfare” kicks off with a considerable head of steam, a decidedly old school vibe dominating the open, but it goes down hill once Ignite tries to bite off more than he can chew. Musically it rarely falters, even though the highs aren’t particularly up there. Lyrically, IgniteMindz can’t keep things interesting over an entire album, but he shows legitimate promise as a double threat. And he doesn’t even try to sound threatening