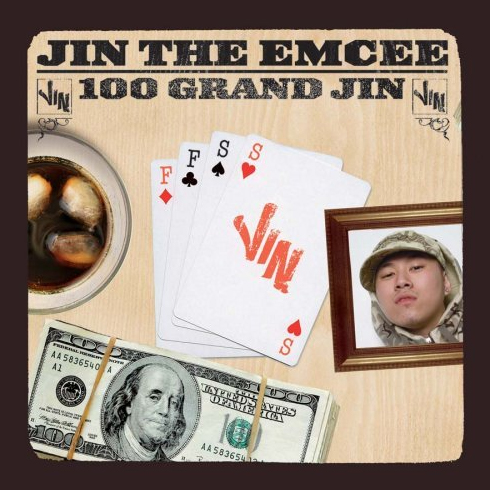 In the relatively short span of five years, Jin has experienced all of the highs and lows one could find in a career spanning an entire lifetime. At the peak Jin was a member of DMX’s infamous Ruff Ryders clique and label, releasing “The Rest is History” to critical acclaim but finding little support from the mainstream OR his label. Realizing this was a dead-end Jin broke out and signed with Draft Records, releasing “The Emcee’s Properganda.” Since then Jin has become the de facto MC to represent Asian-Americans whenever a public figure makes an ass of him or herself, calling out everyone from Hot 97 shock jocks with his “Tsunami Response” to Rosie O’Donnell with “You’re Fired.” Jin Au-Yeung takes pride in his Chinese heritage but doesn’t limit himself to it, always stating that he’s “The Emcee” first and foremost and that his most important goal is to make records that go beyond his punchline king reputation. On “100 Grand Jin” the proof is in the pudding on tracks like “Long Winding Road”:

“Aiyyo the streets is quick to talk
Like ‘Jin things ain’t been the same since you left 106 & Park’
Remember when them cats hit you with them Chinese jokes
You came back hard, and held it down for Chinese folks
Word – but what else was I suppose to do?
You either win or go home it’s non-negotiable
This was four years ago but when shorties pass my way
They look at me sideways like it was last Friday
Damn – ain’t that a testament of skill
I took 7 weeks and finessed it into to a deal
Had the hood in a frenzy no question I was ill
Pulled out the R chain and my destiny was sealed
Mo’ money mo’ problems ain’t that a bitch
So much drama in my life you would think I was rich
[…]
As far as rhymes go I ain’t never runnin out
But without distribution I ain’t never comin out
Tryin to find my way out of the dumps
Then ‘Learn Chinese’ dropped and got me out of my slump
Fell out my chair when the shit hit ‘The Basement’
Look this ain’t just a song, it’s a statement
My intent, was never to explot my descent
When it went national it was a major event
[…]
You hear the punchlines and think ‘Yeah that’s quite ill’
When I’m battlin I think about the gas and light bill
And that’s barely enough to survive
To the point I might have to get a 9 to 5
Maybe this rap thing, just wasn’t meant to be
Didn’t know, it was a hundred percent me
Upon instinct I decided to quit
Not for publicity, but the fire was lit
To burn down what they saw as a decoy
In order to rebuild you gotta de-stroy”

Now that’s deep, deep, deeper than Atlantis. There’s no way anyone could perceive Jin as a one-trick pony or a freestyle rapper only after hearing this Statick produced track with the Kanye-esque backdrop. Jin himself has indicated that “100 Grand Jin” was conceived as more of a mixtape collection but the funny thing is you can’t tell that anywhere on the album, starting right on the banging Ariel produced track “The Ambassador”:

“Aiyyo I’m hung low, I know how to drive and I rhyme
Now that’s three stereotypes broken at one time!
For the record, I’m not the first Asian that got signed
But guess what, you will not find
no others to make an impact like mine
Even now, I continue to walk that line
between being an artist and a man of my roots
Take a stroll in my shoes or stand in my boots
The best Asian rapper?? I ain’t hearin it
Keep that title, I’m out to be the best period!”

Representing over and over again on “100 Grand Jin,” The Emcee has little to fear about the future of his hip-hop career even as he explores his roots by rapping an album entirely in Cantonese entitled “ABC Jin” and working on an independently produced movie and looking for more Hollywood opportunities (he had a cameo in “2 Fast 2 Furious Soundtrack”) to get down with. Still you can’t help but feel the strength of his raps, from the title track to freestyles over familiar beats like GangStarr’s “Mass Appeal” and “Fuck Jay-Z,” the latter of which has been radically misunderstood as the song is not actually dissing Jay. In fact the song is an examination of why hip-hop fans and radio stations are so obsessed with beefs between MC’s and how “Another Rap Song” can be made a hit just by calling out a rapper on the record. It’s also worth nothing that “Music is My Life” with Floetry was remade for Hi-Tek’s album “Hi-Teknology 2,” sadly without Jin on it. Even though he continues to be cut off and denied his props in this manner, “100 Grand Jin” proves he is as serious about the craft of hip-hop as ever and still a force to be reckoned with in the future. Haters can stereotype him, block him from getting spins, and force him to distribute his albums independently through MySpace but with strength, determination and strong lyrical craftsmanship Jin will prevail, even if it takes five more years and four more record deals or more. Jin says it himself: “Money Comes, Money Goes” but hip-hop is still something you live, and not just something you do.