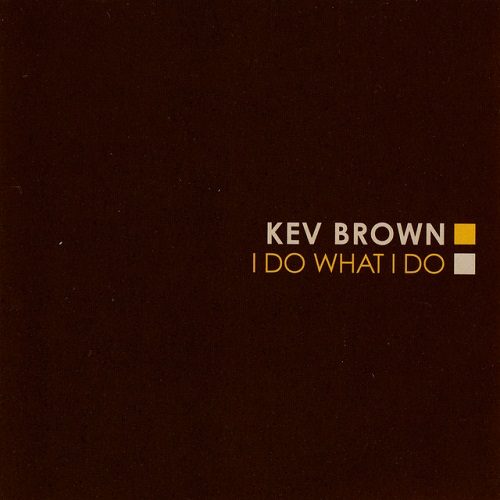 Production isn’t what it used to be. All music tends to update with the times, but hip-hop has had to update with the law, making it increasingly difficult for “traditionalist” beat makers to thrive, and making it almost unstylish to sample. Especially in a world with no J Dilla, a guy like Kev Brown becomes particularly valuable and unfortunately rare. He is a producer’s producer – using his musical know-how to sample from varying sources in forming a single song. His kicks thump, his snares crack – the overall sound is organic, soulful, and decidedly mid-90’s. And there’s little wonder why message board fans call the guy “Pete Rock Jr.:” his bass lines rule. Warm and soft, the bass notes usually hit in places no other producer would put them, yet they compliment the tracks perfectly, often turning lonely guitar loops into lush patterns.  Like other members of the Maryland-based Low Budget collective, Kev Brown doubles as a producer and emcee, faring well in both fields. Lyrically, Brown isn’t exceptional, but for a beat maker of his caliber, he’s certainly well above average. Often speaking on the way he do his do and the frustrations of his everyday life, it’s never a case of biting off too much to chew, and his voice is pleasant enough to suffice as is. Additionally, there are hardly any curses over the entire album, yet the sound remains very street. Along the way, reliable emcee Kenn Starr makes a couple notable appearances, and producer/rapper Oddisee proves to be a nice surprise on the mic himself.  The album’s aim isn’t to hit hard, and it really doesn’t. While Pete Rock’s jazz can break your neck, “I Do What I Do” is more on a smoothed-out head nod tip. In short, if Kev wanted to pursue a career in smooth jazz, he’d need no more than his MPC. “Struggla’s Theme,” however, is a flat-out banger, the kind that forces the most infectious head nod without sounding the slightest bit forceful. InI emcee Grap Luva only adds to the street soul vibe with his guest verse. Phonte of Little Brother is nice as usual on the rather aptly titled “Beats ‘n’ Rhymes,” continuing to drop metaphors like no one else in rap, both bragging and bigging up his son: “and they say I’m raising hell, I just call him Dylan.”  “Life’s a Gamble,” which is actually a fifteen-minute suite with at least three full-length songs, is inconveniently the standout track of the album. The first movement is a great string number, but it isn’t until around the 5:00 mark that it really takes off. The beat includes an amazing, escalating jazz guitar sample, the best loop of the entire album. It’s one of those instances where you don’t even recognize someone’s rapping over the beat – it’s that mesmerizing. Still, Kev tends to get a little too chilled-out for his own good sometimes, with tracks like “Outside Lookin’ In” and “Keep On” being simplistic and mellow enough to bore.  “I Do What I Do” remains an unfairly and terribly slept-on album, this year-and-a-half-late review standing as a little more proof of the fact. It’s highly bumpable, simultaneously gritty and smooth, put together precisely and professionally, and all in the home studio of the maestro. Maybe too “traditionalist” for some, but those on the same wavelength won’t be disappointed.