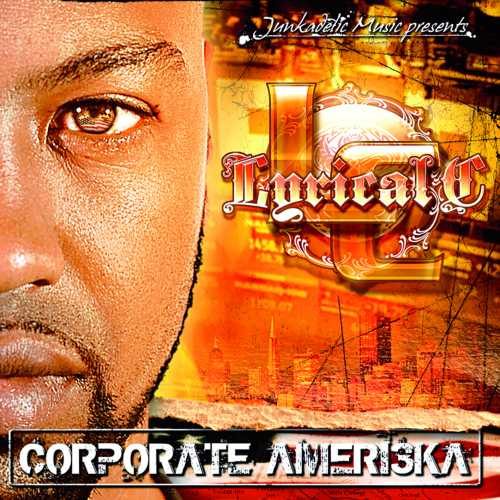 When rappers talk about how they are from the Bay area I first think about E-40 and then I think about the ‘hyphy’ movement of the past few years and contemplate exactly how little of an interest I have in it. Thankfully, Lyrical C represents the Bay with a more traditional approach to rap music and does more than attempt to get his listeners on the floor with some cheesy beat and even cheesier chorus, like The Federation’s “Donkey” track. Lyrical C finds himself on the middle ground between the underground and the mainstream based on the sound of “Corporate Ameri3ka”. Some of the songs feature a minimalist beat with scratches, whereas others bring a heavy low bass to the LP. The subject matter ranges from gunplay to politics to love. However, from an album with such a pretentious title one would likely expect something on more of a conscious tip which this album rarely emanates.

“Something Must Be Wrong” is a strong kickoff to the album. The snappy and brooding beat comes through the speakers and Lyrical C immediately rips into it, doing his best Kool G Rap impression. It is rare these days that an artist is willing to cut out the theatrics and just straight lace a track right off the bat. Lyrical C gives a strong indication of his lyrical prowess on his verse while Motion Man brings his own intergalactic style to the mix and Carlton “Chilli” Willis offers a serviceable R&B hook when he enigmatically croons “Something must be wrong with him” repeatedly.

The album clearly becomes a hit and miss affair, unfortunately with the misses like “Overseas” being more bad than the good songs being particularly good. “Overseas” is about how Lyrical C and his homies First Born and IMO rock shows ‘overseas’. Obviously, it is an expression of just how rappers feel that they need to boast themselves onto a plateau higher than they ought to be. IMO goes on a rant with his raspy voice at the end of the track which is obnoxious and will have almost any listener reach for the skip button.

Tracks like “Bionic”, “16 bars” and “Never Change” are the standouts, but for very different reasons, which may say something positive for Lyrical’s versatility. “Bionic” is as one may imagine it to be, it is straight spitting over a robotic, epic beat. C puts the â€˜Lyricalâ€™ in his name with this one dropping lines like, “Like Jason I’m a manimal, spitting precisely through my mandible!” The flow will remind many of Chino XLâ€™s style on this particular track, though usually Lyrical C has fewer one-liners and raps slightly slower. The video of “Bionic” can also be viewed on the computer as part of the enhanced CD package, which is a rarity in this day in age with oft packaged in DVDâ€™s. The rest of this presentation of this album is sub-par with the cover art being an extreme close-up of LCâ€™s face with a burning American flag reflecting in his eye. The picture would likely have the opposite effect than it is supposed to on a consumer like myself.

“16 Bars” is more of a surprise than anything–the shock comes from the fact that O.C. of D.I.T.C. fame gets down with the Westcoast host. It makes one think of how rap circles work, because there does not seem to be any logical reason as to why a New York legend would get down with a relatively unknown Bay Area emcee, but it is a testament to Lyricalâ€™s potential that never takes full form on “Corporate Ameri3ka”. O.C., as expected, outshines Lyrical C with his silky vocals and poise.

Refreshingly, the best is saved for last, as so many mediocre emcees try to cram their best stuff at the beginning of their albums leaving the rest extremely thin. Lyrical C, who is only slightly better than the typical rapper, spaces out the hottest joints wisely. “Never Change” closes the album with the same sample that Jay-Z uses on the same-titled track on his classic “Blueprint” album. If you havenâ€™t heard that, rest assured that it is a pleasant soulful loop that would evoke the best out of nearly any rapper. This is the only production work from Mr. Sche, who also makes a quality visit to the mic, and it outdoes any of the previous tracks co-exclusively produced by DJ Junkaz Lou and Larry Hutch.

Lyrical brings compact rhymes and sing-song choruses to the picture on “Corporate Ameri3ka” while not really focusing on what the title suggests. In all reality, “Corporate Ameri3ka” ends up being an exercise in battle-driven lyrics for the most part. Lyrical C must be commended though because of his ability to stray from what his home is known for, hyphy music, and just dropping a fairly consistent, traditional, but certainly not a landmark CD.