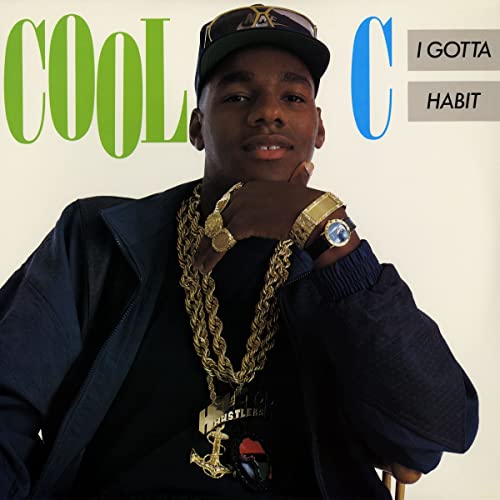 Having recently taken a look at a solo album from Steady B, I thought it appropriate to look at one from his partner in crime Christopher Roney b/k/a Cool C. His career was launched in the 1980’s the same way a lot of other emcees got quick notoriety — diss tracks and response records. The “Juice Crew Dis” got C enough buzz to ultimately get a deal with Atlantic Records, who released his major label debut “I Gotta Habit” on August 8, 1989. With the marketing muscle of Atlantic behind him, Cool C reached heights higher than the “Hilltop” he hailed from, with lead single “Glamorous Life” reaching No. 11 on the Billboard “Rap Singles” chart.

Urban legend says that the girl Cool C is flirting with in the video is Philadelphia chanteuse Jill Scott, but Steady B’s former DJ has denied it and personally I don’t see the similarity between them. Honestly it’s also my least favorite song from the entire album. It’s easy to see why it was picked to be a single. The uptempo beat, the sirens, the pumping “go, go, go” chorus all scream that this is a song to play at a party or request on the radio. For me though it’s like like trying to fit a square peg into a round hole. Cool C goes along with the presentation, even allowing a fly lady to take an unexpected potshot at EST of Three Times Dope (did he have beef with the Hilltop Hustlers — if so I didn’t know about it) but his lyrics about spoiling women with designer fashions, gold and jewels seem half hearted. He’s in his comfort zone defending hip-hop from the haters on “Enemy Territory.”

People don’t use the phrase “Takin No Shorts” to describe their motivation to succeed any more, but here it’s charmingly nostalgic, just like hearing Cool C rhyme “hizzy” with “dizzy.” The scratches, the drum track and the samples all take your back. Even Rakim uttering the word “cool” (from “Microphone Fiend”) puts you right back in a bygone era, or if you’re way younger than I am (and you probably are) it’s a look at what life was like back then — right down to Cool C’s obsession with being the neighborhood champion of dice games. That’s why the song’s subtitle is “The Gambler.”

Long before Georges St-Pierre said it to Matt Hughes, Cool C was telling rappers “I’m Not Impressed” with their performance on the mic. “It’s the slayer/dope rhyme sayer/suckers I’ll play ya/now pay A-TTENTION/cause that’s trash you’re popping/The only thing you’re clocking is the time you’re watching.” The clarity of the diction, the forceful delivery, and the simple understated instrumental really push the presentation to another level. He wasn’t the greatest lyricist of the era, but he was far enough above the average that his swagger on this song was fully warranted.

The usual knock on Cool C both then and now is that he’s “a MC Shan soundalike,” but Roney seems to acknowledge the comparison on “Down to the Grissle. He’s almost mocking Shan’s classic line “hip-hop, was set out in the dark, they used to do it out in the park” with his line “hip-hop, started from the streets.” It could be a coincidence but the fact he keeps saying “hip-hop” over and over again the same way Shan does doesn’t feel like it. It’s like he’s saying “You’re from +The Bridge+ but I’m from the +Hilltop” and we do it better over here.”

Then again given this is the man who did the “Juice Crew Dis” I don’t think that’s a coincidence at all. Happily that classic diss track is included here.

Ironies abound on “I Gotta Habit” with or without Cool C’s alleged similarity to Shan. Even though Steady B was the better known of the Hilltop Hustlers crew back then and has a much larger solo discography to boot, I’d argue Cool C is the better rapper of the two. Despite this album’s one errant (albeit successful) attempt to go pop, Roney is a comfortably streetwise rapper with a distinctive flair for rocking the mic. His craft was clearly well polished from a young age, because he rides over beats with a precision that other artists can’t match. Unfortunately for C despite being dope on the mic, his record sales never quite matched that of his cohort, and when they tried to relaunch their careers as CEB (Countin’ Endless Bank) it backfired spectacularly. While B is the one who gets the credit for “robbing banks” according to Ras Kass, Roney is the one on death row awaiting execution for their botched heist thanks to the fact he shot and killed a cop. Oops.

In the end Cool C was right to say he had a habit. Roney was addicted to fame and fortune, and when he couldn’t find it on the mic, he and B made the worst collective decision of their lives. Had he been able to overcome his lust for wealth, he could have transitioned into being a generational father figure for future rappers in and outside of Philadelphia. He was certainly a local legend according to friends from the area, but he threw it all away on one botched heist. The final irony of “I Gotta Habit” is that you might need to rob a bank YOURSELF if you want a physical copy. You can cop it digitally for about $10 including sales tax, but due to his infamy and poor sales of the album in its era, the CD commands $800-$1,000 on the reseller market. If you own a copy yourself perhaps it’s time to cash in.