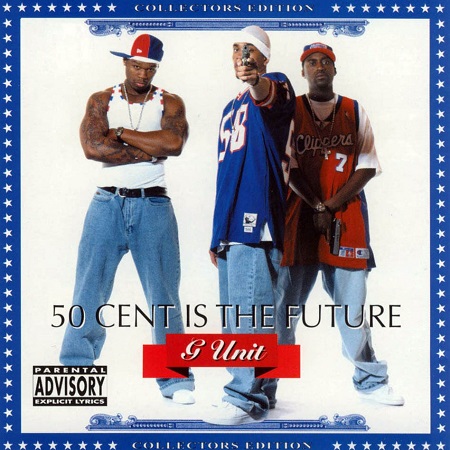 By now you’ve either watched the PPV, read the results, or seen it on SportsCenter. ‘Pretty Boy’ Floyd Mayweather Jr. defeated ‘Golden Boy’ Oscar De La Hoya in a twelve round fight via split decision. Quite honestly that’s more or less what I expected. The only unpredictable things about this fight were how much of the G-Unit would accompany Mayweather to the ring and whether or not they’d start any trouble with De La Hoya’s camp once they got there. If watching the free specials on HBO hyping up the fight showed me anything it’s that Curtis Jackson and Floyd Mayweather Jr. have more in common than just their friendship; they have an uncomprimising belief in themselves and their ability to dominate the competition. 50 Cent and Pretty Boy Floyd both came up the hard way and had to fight for everything that they’ve got, and now that they’re on top they’ll fight like hell to keep anybody else from taking away their time in the spotlight. For 50 that confidence was formed years ago when he was hustling mixtapes on the street, the kind of swagger evidenced in both the title of “50 Cent Is the Future” and the lyrics of the opening track “U Should Be Here”:

“Look I don’t really need you, I get my dough, bitch
I got some Coup’s, I got some Jeeps, I got some mo’ shit
I stay wit them hoes, cause I use them tools
I keep a Benz, I keep some rims, and I stay with some jewels
I’m internationally known, man e’rybody know me
Way down in Magnolia they feelin me wodie
But you can catch me in Houston, with Bun and Pimp C
Or in Miami with Luke, in V.I.P.”

How could 50 Cent be so damn sure? It would be well over another year before “Get Rich or Die Tryin’ would hit store shelves, and even then there was no guarantee his album would go gold let alone platinum multiple times over. Confidence. Confidence can in some cases be taught but it can’t take the place of the inherent knowledge some people are BORN WITH knowing that they are the shit. Perhaps this kind of confidence is bred from advertisity; growing up in poverty within a negative environment either builds you up or breaks you down. You might have that innate confidence but ultimately the hood brings it out of you as a survival mechanism. Even being shot up, 50 Cent could not be shot down. It may have changed his vocal tone and flow a little bit from the “How to Rob” days but it also gave him a cocky attitude about his invulnerability – he knew he was destined to do greater things with his life. Songs like “Call Me” show 50 extending that attitude to all facets of his game – who wouldn’t want to fuck with the man who’s THE MAN?

“Look I done changed up bitch, I done came up
My neck, my wrist, my ears, my fists are all blinged up
In the hood they say 50 ‘You a grimy nigga’
With the rims in that Coupe stay shiny nigga (stay shiny nigga)
When you disrespect me is where I draw the line
You seen my artwork but you ain’t seen me draw the nine
Come through the hood, you’ll get shot homey just cause I say so
I’m the hottest shit on this street, I don’t do J Lo (here we go)”

It’s a little bit of a misnomer that this is listed as a 50 Cent album though. Quite honestly Tony Yayo and Lloyd Banks get just as much if not more shine than 50 on this disc. It’s not notice when you have tracks with names like “Tony Yayo Explosion” and “The Banks Workout” that they are getting their shine on too.

Banks: “I’m smokin out the jar (jar) scopin out the bar
Distracted see shorty breast pokin out the bra (uh-huh)
Not the type to go spark metal in
Start thinkin you gangsta cause you hit a park yellow van (yea)
Act hard but ya heart made a marshmellows man
Talk tough, til you get cuffed and start tellin damn
Everyday I got a new bitch and when I’m done wit her
It’ll look like she dived head first in the pool wit it (GOD DAMN)
You only gon wind up dead tryin to prove shit
I put chalk around ya head like a pool stick (yea)
I gotta have bucks on the waist
I’m hungry like a south african with fly stuck to his face”

“Music Vibes” should really be thrown out the window on this review, since a majority of the beats are being reused and recycled from other sources. Indeed even though the packaging and retail distribution of this CD might lead you to think it was either a 50 Cent or a G-Unit full length album, this is much more akin to a mixtape and even has the DJ Whoo Kid seal of approval on the back cover. What shouldn’t be thrown out though is how infectious 50 Cent’s swagger had become by this point, spreading out through him to his G-Unit familia of like-minded rappers looking to blow up into huge superstars. 50 may have been the clear frontrunner to be the star out of the crew, but as it turned out they all got their shine on with solo albums in the long run; 50 just had the first shot. Would we have ever found out the rest of his crew had skills too if he hadn’t blown up with that first major label album; or rather the first one that didn’t get shelved by a label who couldn’t see his potential? Like Pretty Boy Floyd, 50 Cent knew it was only a matter of time before he got that one shot to prove to the whole world he was a superstar, and on “50 Cent Is the Future” he was just waiting to blow.