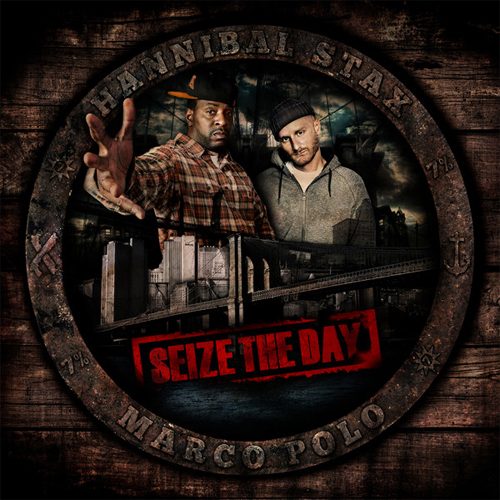 As far as Gang Starr affiliates go, Hannibal Stax (aka H. Stax) is a rapper that has complemented DJ Premier’s gully New York soundscapes rather than stood out on them. Vocally along the lines of NYGz, H. Stax brings Marco Polo in to provide the boom bap sound that he so often prefers to rhyme over. Despite spitting one of the best verses on Gang Starr’s “Same Team, No Games”, H. Stax hasn’t really been given his shine, yet Big Shug has had numerous albums released.

To be fair, as poor as Big Shug is, H. Stax isn’t the most lyrical emcee himself and it could be argued he is the carbon copy of numerous New York rappers from the 90s. “Seize The Day” has been offered as free streams online, and it is easy to see why. Marco Polo provides some decent, yet unsurprising production throughout that just doesn’t match up to his “Newport Authority” material; let alone the “Port Authority” series. “Righteous Kill” and “Keep Grindin'” stand out amongst the mediocrity purely because H. Stax actually crafts songs with a theme.

OK, the themes may be as generic as hip hop gets, hustling and threatening wack emcees aren’t going to win any accolades, but “Seize The Day” isn’t about art. Just as Marco enjoys working with grimey rappers such as Ruste Juxx and Torae, H. Stax raps about the streets and the stress that money brings with it. There is an abundance of money-talk in fact, surprising considering this is as underground as it gets in terms of the audience they are aiming at.

Ultimately, H. Stax has a smooth voice that definitely works well with Marco Polo’s style, but without the passion of Torae or the tongue-in-cheek humour that Ruste Juxx brings, he just isn’t interesting enough to hold down fifteen tracks. The best cuts are the energetic sounds of “Warriors Drum”, the Primo-like “46 Bars of Death” and the dope “Righteous Kill”. Without an excellent beat behind him though, the majority of “Seize the Day” is average, generic East Coast hip hop that will only find favour with few.