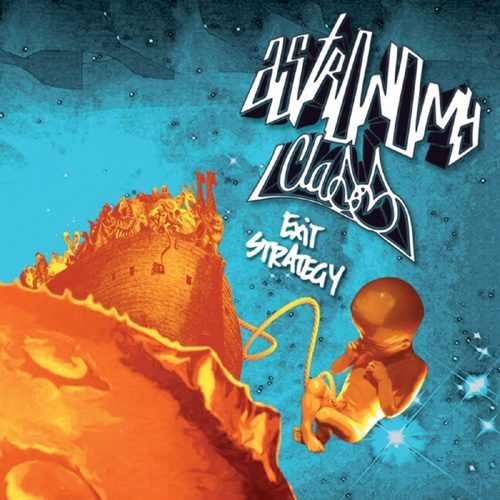 People with accents have got it good. To clarify, in the United States if you have a certain accent you stand out a little more even if the rest of you is average. Hence why you might see the not as hot British exchange student get more attention from the opposite sex. The whole accent works in the rap game too since it automatically sets you apart in a world where a lot of emcees tend to sound the same. That’s the one thing the members of Astronomy Class have got going for them since their Australian accents keep an otherwise average album interesting. I can’t tell you much about emcee Ozi Batla, or producers Sir Robbo and Chasm. I don’t even know much about the guest they boast, though Urthboy has gotten some positive coverage from our site. All I can tell you is that the crew drops average rhymes over reggae inspired beats.

The album opens up with “Midnight at the Observatory” which automatically reinforces my hatred of abstract rap outside of the Wu and Kool Keith. It also begs the question â€“ does all music “inspired” by reggae have to recycle the same damn chords and bass lines? “Rolling Thunder” is a better track since Ozi Batli puts together a more traditional track full of boasts and some social commentary. The beat is not bad but honestly sounds like average and stereotypical reggae. “Nuthin’ Nice” is an example of Ozi Batli at his best as he puts all the abstract mess aside and takes up story-telling with great success. “Heatseeker” is also a noteworthy track as Lotek opens up with a dope verse that focuses on battle raps and not selling out. Ozi Batli’s verse on the same track shows one of two weak points on the album, which is that half the time I don’t know what the man is trying to convey with his raps:

“Brought off the back burner
In fact turn the lights up
Lock in like heatseeker
Hit the loud speaker, metal head to razor
Check the yellow pages”

I have no clue what that has to do with the track or the hook or Lotek’s opening verse and I don’t really care to waste my time trying to figure it out.

The other problem with the album is the beats. After several listens, I have to honestly say that Sir Robbo and Chasm are actually not bad at all when it comes to putting together reggae beats. The beats are by no means original or groundbreaking reggae music, but given the right artists they wouldn’t be bad at all. The problem lies in the fact that Ozi Batli isn’t the right artist. After hearing the likes of Stephen Marley, Damian Marley, Bounty Killer, and Buju Banton make classic reggae tracks, an average rapper like Ozi Batli doesn’t have the energy or soul to hang. True, Batli is a rapper and not a Reggae Singer or DJ, but if he’s going to try and rock over reggae beats the comparison is not an unfair one.

For Astronomy Class, Batli’s accent both hurt and help them. I probably paid a little more attention to his lyrics since the accent kept things interesting, but at the same time given the abstract nature of some of his rhymes coupled with a thick accent I had little patience to decipher what Batli was saying. The reggae beats didn’t help since even when they were good I still would rather hear an actual reggae artist over them. Overall, at times I really liked what Astronomy Class had to offer (check “Fight Club” and “School Daze”), but other times I had no patience for Batli’s lyrics. Next time around I’d rather have Batli use his precise flow on something I can understand and let the abstract act go. Even so, if you don’t mind rappers rocking reggae beats and like abstract lyrics there’s plenty for you to check out on “Exit Strategy.” For the average rap fan though, you’re probably better off passing on Astronomy Class this time around.