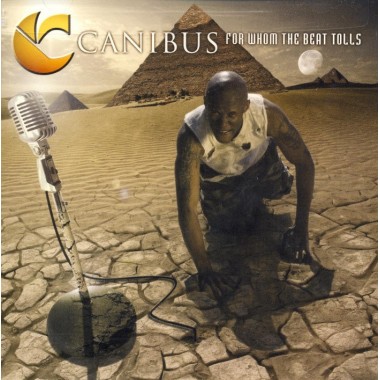 Canibus :: For Whom the Beat Tolls

There will be no producers listed in this review. These songs could have been produced by Stoupe the Enemy of Mankind, DJ Premier, Alchemist or Chief Xcel for all I know. There will be no commentary on the thickness of the liner notes, no discussion of the quality of the artwork, no examination of whether the back cover maintains the theme presented on the front. Loyal RapReviews.com loyal readers (and we appreciate all of you) have been asking the same question for weeks now: “Where is the new Canibus review?” This is another one of those curious cases where the album that should have been at the top of our list was the least available. Many sources insisted this album had been out ever since the first week of June, but every store I went to had no copies available or insisted it was on order. With no promotional copy from the artist or label available, and no purchasable copy available either, there was little to nothing I could do despite the overwhelming demand for this review.

I should have just looked for it on iTunes all along. For $9.99 I now have a digital download, which I can at my convenience burn to a CD if I want to play it in the whip or my home stereo. This is the first Canibus album I’ve ever owned without a plastic tray to peel the shrinkwrap off of, but if there was ever an appropriate rapper to be distributed digitally it’s the Vitruvian CanMan, the rapper who a decade ago famously said that he walked on the surface of the sun, just looking for shade. As one of the most futuristic lyrical freestylers to ever transition from ripping shows to recording albums, has any rapper alive been more prepared to go totally digital? This feels right. Canibus albums should have been online only purchases all along. Stripped of a physical product and presence, Canibus can ask “For Whom the Beat Tolls” and hear the echo reverberate across the digital bitstream. The ping comes back in milliseconds with the answer – the beat tolls for him, the hip-hop icon, the self-described “Poet Laureate Infinity”:

“Don’t be upset with Canibus yet, the kids just want respect
You been a success but what do he get?
Divine design, a miracle of metallurgy
Every clergy member from Mecca who heard of me worshipped me
I got away nervously, talked about it purposefully
Next time I see it, it’s gonna have a word with me
The biological chemical emergency
I purchase the beat; I resumed PsyOps on the enemy
Mix the blood so it don’t coagulate
The sex magic won’t work if the bitch masturbates
Nobody can hold me back, my flow bloviates into a spiritual shape
A capsule in space, no emcee could rhyme like this, there’s no challenge
His Poet Laureate should pontificates balance
Telencephalon olfactory lobes I had to practice
When a woman has her period I smell it on the mattress
Advanced step in innovative mobility
Most MC’s try to clone me lyrically
They can’t battle me so they’d rather embarrass me
But I need a volunteer, do I have any?
The NASA contractor with a satchel of answers
I passed up the Nobel Peace Prize for my passion
Most of you will never understand what I mean”

Perhaps not but conceptually I understand what Canibus tried to do with this song – get people amped up about “the greatest rhyme of all time” by creating a song with five different layers of vocal tracks. Obviously listening to all five of them at once would be confusing as hell so on his website you could manipulate a mixer to hear as many at one time as you could handle. Released in a more conventional format we’re given the third and the fourth layer of that track; either one being an 11 minute epic opus of lyrical creativity. The sales pitch for buying “For Whom the Beat Tolls” in its entirety is clever even by clever’s own standards – if you buy the song one track at a time you won’t getEITHER of these incredible songs. Only by purchasing the entire album in one shot as one download do you get these “album only” songs from iTunes, and ironically they are worth the purchase price alone. That’s not to say Canibus doesn’t have other examples of impressive lyrical dexterity and complexity. Having long since shed the tag of being a freestyle only MC who couldn’t write narrative raps, songs like “Magnum Innominandum” shouldn’t come as a surprise to anyone these days:

“I was taught my heart was my brain in my past life
I was thrashed in a fight over my passion for the mic
Risked the ultimate sacrifice to rhyme, askin’ Christ why?
He replied; “Passions like mine have a price”
They will grab you if you grab the mic
Try to squeeze the life from you, take away your life
There’s only one way to fight
Zero gravity device, turn it on
Impale them on stalactites and stalagmites, alright?
I was hyped; he told me that every word I recite
Symbolically represents the whole world’s kryptonite
Includin; but not limited to spittin’ in the booth
Spit the truth; tell the leadership to listen to the troops
The leadership bleeds blue, we bleed red
In the end the only thing we can agree on is death
I beg you to get it together
To truly be clever you gotta be able to think ahead and remember
Cause most of us have forgotten where we came from
Turned a blind eye to the energy that made us
I ain’t the same Canibus I was
But I still get busy cause that’s what Canibus does
The rhymes are relevant day after my development
Food for thought, beverages should be free but they keep sellin it
The mixtape comes out today, announce the date
The potato gets off his couch to wait
Cause he knows something wicked his way comes
They can hear the sound of the war drum, Canibus save them!
I can’t save you, but you can save yourself
We can save each other; I just came to help”

Say word. “For Whom the Beat Tolls” is not the solution to all that ails rap, but neither does it make the much discussed problems of meaningless misogyny and vapid materialistic content worse. From the eerie Indian backdrop of “The Fusion Centre” to the futuristic booming beats of “The Goetia” to the epic musical groove of “Secrets Among Cosmonauts” Canibus keeps doing what he does best over and over again, spitting “raw energy” in his raps over stellar tracks – or as he puts it in the latter song himself:

“I don’t teach cause teachers only receive contempt from the youth
I know what I know, there’s no need to convince you
The poetry’s fairly simple, you perceive the visual
The grass isn’t greener, it’s browner
I believe in the power that spins the Earth around upward and outward
You say, “You don’t like the album”, I say you a coward
You say you don’t like the beats, I say what about them?
Whether or not you like the lyrics I would not be surprised
If you the devil in disguise I can see it in your eyes
We are all equal; we are all sisters and brothers
In spite of our colour, all we have is each other, they love us”

There are only a few guest rappers on “For Whom the Beat Tolls” – Killah Priest on “Liquid Wordz,” K-Solo on “There He Has Been” and so on, but as with any good Canibus album he needs few guests because he is entirely capable of carrying the presentation on his own. That’s not to say that Canibus hasn’t had a few HORRIBLE albums too but by and large his catalogue leaves other rappers to shame and has become increasingly more consistant and worthwhile over the last few years. “For Whom the Beat Tolls” is not an exception to that constant in any way – it’s the latest and greatest Canibus album you can’t find in stores anywhere that you shouldn’t wait around to get a copy of when it truly seems better for his raps to have infiltrated cyberspace and jacked us straight into the vision of William Gibson. This is Neuromantic Rap for the Body Electric.

Canibus :: For Whom the Beat Tolls
8.5Overall Score
Music8.5
Lyrics8.5