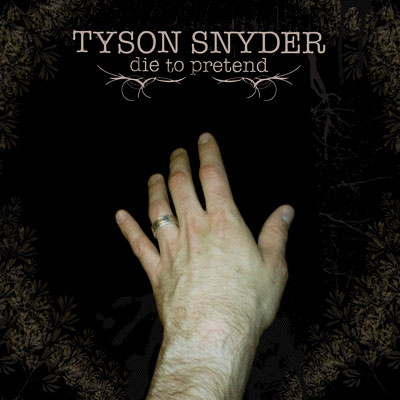 Cypress Hill had it right years ago when they proclaimed that everybody “wanna be a rap superstar.” But in Tyson Snyder’s case, he doesn’t want to “live large” or have “5 cars.” Instead, the Durango, Colorado native just wants to be heard. Snyder’s rap aspirations certainly have more commendable origins than the simple pursuit of money, yet even with all the good intentions behind it “Die to Pretend” still fails to rise above average. With rock influenced beats and somber lyrics, Snyder seems to have the formula for success, but somehow his mixture fails to have much mainstream appeal. It’s a shame too, since through his music you can tell that Snyder is a genuine person and nice guy so you want to root for him. With that as your motive, “Die to Pretend” isn’t so bad that you couldn’t support Snyder on moral grounds. But when compared to the rest of the rap game, Snyder just isn’t noteworthy enough to battle with the big boys.

Tyson Snyder starts things off with “Welcome” where he tells us that basically his life is boring, he likes it that way, you should be happy with your life, and he doesn’t really care if you listen to his record. Yet he also says he feels he has something to say which is the reason he decided to release the record. The contradictory message continues with “Write A Book” where he drops a verse that goes on for a minute and half and then the hook comes in and he says he’s going to write a book and make a movie, but he doesn’t care if you read it or watch. Seriously, if that’s your attitude don’t write the book or make the movie. “Grow Up When I’m Ready” is a similar track simply because he goes on with a verse that lasts way too long and hook that doesn’t have much to do with the verse. Matter of fact, Snyder’s verses sound like a random collection of advice given to him at various times. The formula continues track after track, depressing beat, random collection of lines for 90 seconds, and some uplifting hook taken from an after school special. The title track closes out the album with Snyder going on and on about some depressing shit of some sort, I think he mentions an out of body experience at some point.

When I first listened to “Die to Pretend” I merely thought Tyson Snyder was an average emcee, nice guy, with nothing interesting to say. So I attributed the fact that none of his songs really stuck with me because he was just too boring to get my attention. Further listening changed my view entirely, I didn’t catch much of what Snyder had to say simply because he doesn’t really make much sense most of the time. There’s not storytelling here, even when he seems to be trying to tell a story. It’s just a lot of abstract rhymes that I’m sure make sense to Mr. Snyder but don’t really do much for the listener. The hooks are better, but the generic “be yourself and be happy” act gets boring quick. To his credit, Snyder has a halfway decent flow and an OK but unoriginal voice. The beats are much better but still fail to rise above being average. They are good beats if you are looking for a track with a nice dark vibe, but a whole album of them is way too much. Somewhere in the liner notes Snyder says that if you don’t like or can’t respect his music then he can’t be friends with you â€“ well me and Snyder won’t be friends. You probably shouldn’t be his friend either, at least if said friendship is based entirely on his music.