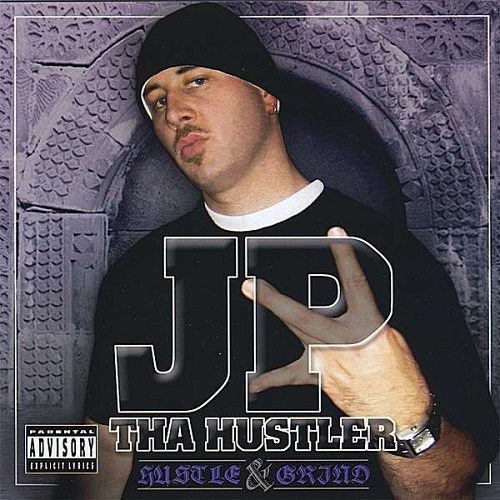 Horrorcore and Michigan go hand in hand. The genres originators are from Detroit and most Michigan acts delve into the darker side of life at some point during their career. Dayton Family’s more hardcore tracks teetered on the edge of being horrorcore and even Eminem included darker tracks on all his albums. It comes as no surprise that anyone involved in the Michigan rap scene would be involved in the horrorcore scene as well. JP Tha Hustler is a rapper/producer whose biggest claim to fame has been producing the last two Insane Poetry albums. Though Insane Poetry are considered horrorcore pioneers, JP is more of a conventional rap artist. His “Hustle & Grind” album shows just how these two worlds are intertwined. For the most part JP’s beats and raps are more akin to West coast gangsta rap, but guest spots by Insane Poetry abound throughout.

JP opens things up on the solo tip with “Can’t Fuck With This” where he explains what he’s all about over a simple synth loop and bass line:

“My every move is a calculated step
I’ve been waiting a long time to let my shit vent
I’ve been putting in work while you bitches got bent
I’ve been grinding for so long while motherfuckers slept
I’m so sick with the mental part of the game, y’all bitches is lame
Got me dying and shit with your pops and your chains
You need to stop with the games, you lying dropping them names
Ego tripping little bitch, I’m taking shots at your fame”

In all honesty, this track does little to advance JP since both the beat and the lyrics are average gangsta rap. “Sex & Violins” strengthens JP’s reputation as a producer since he gets more complex with the violin loop on this instrumental track. The music isn’t so good it could stand on its own, but it would definitely nod heads coupled with the right emcee. “Ghetto USA (remix)” features Lowdown and Insane Poetry and the guest emcees try to save an otherwise pedestrian beat. “Top to the Bottom (remix)” features Lowdown and Cisco Locc and once again the guest emcees are the stand outs which shouldn’t be the case on a producer’s album. Things don’t get much better throughout the album as JP isn’t the best producer out there. His arsenal is limited to synths and leads to an overall empty and simple sound. That’s not to say that dope music can’t be made through a strictly digital production set-up, but JP’s simple drum and instrument loops fail to impress. On occasion JP steps up to the plate and puts together something noteworthy. “Laid Back In The Cadillac” is an instrumental where JP goes to town with an electric guitar with great results. “Devil’s Den (Rock Remix)” is another track where JP puts together an interesting mix of instrumentals that work extremely well with Insane Poetry’s lyrics.

Overall, “Hustle & Grind” isn’t an album I’d recommend musically or lyrically. JP barely raps on here and his lyrics are nothing to write home about. His production is also average and tends to be simple and unmemorable. With that said, I wouldn’t write JP off completely as his music is best when paired with the right emcee. In particular, JP’s brand of synthetic funk sounds very good when paired with Insane Poetry. Basically, I wouldn’t recommend copping JP’s solo disk, but if you see him as a featured producer on another rapper’s album it might be worth peeping.