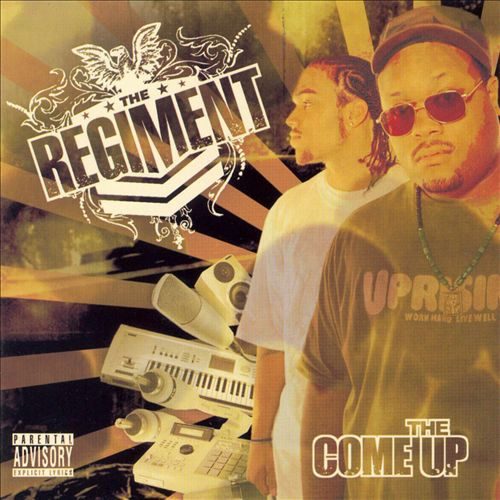 The Regiment :: The Come Up

The late great J Dilla truly was a one-off. One of the most over-looked producers in hip hop, largely due to his self-deprecating ego, he was never more sorely missed than on Common’s recent outing, “Finding Forever”. Kanye West brought some wonderful music on that album, but the one posthumous Dilla contribution, â€˜So Far To Go’, showed just how much attention he paid to every single part of the track. Kanye has many talents as a producer, but you get the feeling neither Mr West nor virtually anyone else puts as much loving care into every individual part of whatever they work on. Jay Dee loved music, maybe too much, but at least music loved him back. And it is nice to know that a young group from Detroit, The Regiment, has the good sense to pay tribute to him from the very start of their fledgling career. The debut LP, entitled “The Come Up”, finds them both praising the late producer in their biography, and, more importantly, in their music. There are distinct echoes of the soulful direction that helped define much of Dilla’s catalogue, and it is clear that his spirit lives on.

The group comprises of two young MC’s â€“ O.S.I. (aged 21) and C.Reid (a mere 20) and their DJ, The Arch-E-Tect (aged 22). For once, the ages of the artists is of real relevance as this album is far from being technically perfect, but the knowledge that this is their debut, as well as their precocious age, helps a listener/critic forgive certain flaws. The Regiment’s heart is in the right place, and, bar the pomposity of youth (hey, we’ve all been there) they certainly deliver a promising, if slightly overlong album. The attached blurb, alongside certain songs and skits, help reinforce the idea that they do think that their way is best â€“ for example, you’ll find Dirty South 808 music being mercilessly lampooned on an interlude â€˜In The Club’, alongside the clichÃ©d nature of black culture in America getting it hard on â€˜Chicken Skit’. More of these particular skits later â€“ they hold the key to unlocking the secret of this album.

The two MC’s differ wildly â€“ there is little chance you will confuse them, as their vocals (and, to an extent, levels of skill) differ wildly. The DJ only gets to produce two joints on the album, but presumably pitches in on the cuts and scratches, as well as in live shows. But aside from the group itself, one of the real finds is the producer Ghosttown, hailing from Leeds in good old England (United Kingdom territory, God Save the Queen) â€“ Ghost is one soulful dude, and successfully handles 13 out of the 20 tracks, never dropping the ball. He doesn’t have a monopoly on hot tracks, though â€“ French producer Doc Singe provides perhaps the albums zenith in the lush â€˜Relax Your Soul’, and a peep at the liner notes reveals that three quarters of the album has been produced in Europe. If you didn’t know this, take my word for it â€“ you would have had no idea, I sure as hell didn’t. As a tribute to Dilla, this works better than “Finding Forever”, as the producers nail the preferred Detroit soundscape perfectly.

The level of musical consistency is excellent throughout, although the lyrical/flow capabilities are somewhat variable. As I mentioned before, the two MC’s are chalk and cheese, but both are young by today’s standards, and should improve all-round in the future â€“ time is certainly on their side. However, one particular point must be made â€“ this album is an undeniably clear reincarnation of Little Brother’s classic, “The Minstrel Show”, an LP that received a perfect review on this very site. While it is fine to be reminiscent of classic albums and artists, it seems that modelling your debut so closely on another recent group’s work seems risky â€“ it certainly led me to dissect “The Come Up”, subsequently finding a positive DNA match. The aforementioned skits help give it up: â€˜In The Club’ is basically â€˜Cheatin’ relocating R Kelly’s R&B to Dirty South hip hop; the â€˜Chicken Skit’ is the â€˜5th and Fashion’ skit all over again; and songs such as â€˜Through My Head’ produced by Belgium-based FLO could easily be a 9th Wonder beat. Even the two MC’s vocals and flows eerily echo LB at times, the chorus to â€˜Mic Check’ being a strong example of this.

If there are obvious comparisons between The Regiment and Little Brother, the newcomers are none the worse for it â€“ they have put together a solid debut with some wonderful highs and few lows. It is raw, a touch messy and a few songs too long, but that somehow adds to the appeal. It is a beautiful thing to see two young MC’s shoot for the moon with such abandon â€“ they haven’t landed yet, but if they can improve gradually, year on year, they COULD be bloody good by their mid-20’s. More than this, they are trying to make good music, and in swimming against the tide, deserve some praise for at least trying to go with what they love. They have a long, hard road ahead of them, but time is on their side â€“ although any future sophomore LP from The Regiment should find them stamping their own personality in a more meaningful manner. And, if the rumours about Little Brother breaking up are true, then there is certainly room in the game for a group like The Regiment. One to watch out for.

The Regiment :: The Come Up
8Overall Score
Music8.5
Lyrics7.5