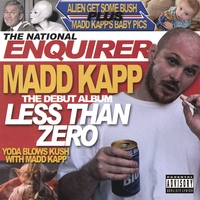 Slumping sales in recent times notwithstanding, hip-hop lyricists have come up on two ways to strike gold or even platinum. The duality is best described by two contrasting quotes – Jay-Z’s “We make a million offa beats cause our stories is deep” versus MIMS’ “I can make a mill sayin’ nothin’ on the track.” While the road to the riches typified by the Jay-Z soundbite tends to generate longer lasting careers and gave rap music ’90s superstars such as Ice Cube and 2Pac, either way is a legitimate business model. Still, if you’d like to generate a loyal following and go down in music history, you’re advised to put a few deep stories on your resumÃ©. A clever combination of saying nothing and saying something doesn’t hurt, as the careers of Nas, Eminem, The Notorious B.I.G. and of course Jay-Z indicate.

On his debut “Less Than Zero,” Michigan rapper Madd Kapp also tries to cover both angles, but it soon becomes evident that he’s the “deep stories”-type of MC. We first meet Kapp overstaying his welcome at a watering hole, mistreating the bar piano and wondering aloud, “Whatever happened to havin’ a good time?” With the well executed “After 2 (Intro),” “Less Than Zero” is off to a good start, the blues bar atmosphere and the lead voice singing instead of rapping announcing an album that has the potential to stand out from the pack. The first few seconds of the following “Bomb Back” – an uptempo string sequence – leave all possibilities open, but once it is restrained by measured drum programming and Madd Kapp enters the track with a loaded flow, the hip-hop flag is quickly raised. And yet, if you let Kapp tell it, his art goes beyond mere music: “This shit ain’t only just rap / this is my life on the track / this is a matter of fact.”

But before we start to compare “Less Than Zero” to every autobiographical notes-turned-album between Scarface’s “The Diary” and Sage Francis’ “Personal Journals,” let’s have a look at Madd Kapp’s more outgoing offerings. “Dance With the Devil” is a fast-paced dance track that, if slowed down, would probably reveal its true identity as a Lil Jon composition. The world has danced to sillier songs, but with its nonchalant quips from “the baldheaded honky who’s runnin’ the beer rap” trying to work up The Joker’s eerie charm, the poorly mixed “Dance With the Devil” could clear dancefloors as easily as it could fill them. You just never know with them damn dance crazes. “Kapp Mann” takes it back to the Swinging Sixties by sampling the theme of the _Batman_ TV show, our hero “wearin’ R. Kelly’s mask and Bishop Don’s hat.” And maybe Slim Shady’s cape? Nevertheless, Madd Kapp manages to put his strictly-business persona across even when he’s not in Bruce Wayne mode.

Apparently, Madd Kapp has been at it for quite some time. Not only does he seem to have been part of a group called Hustlers Inc. and worked with the late Proof regularly, he repeatedly stresses that (as he puts it in “Think About It”) he “taught people how to rhyme and make beats,” at one point even referring to himself as a father figure. “Many groups I lead / I taught ’em how to fish, now they fed,” he illustrates. While he ends “Think About It” on a conciliatory note, he withdraws the olive branch on “Outta Line,” as bitterness creeps into his claims: “The slot that you got is mine / (…) / I been written off, blacklisted, twisted / by some industry haters, so I coughed up this shit / (…) / Y’all ain’t shit, without me you ain’t got no crutch.” It has to be noted that Madd Kapp resides somewhere in the Downriver era, the suburban strip south of Detroit and west of the Detroit River. So he may at certain points only talk about local competition, on other occasions, however, about the greater Detroit scene.

The most detailed entry in Madd Kapp’s recollection of dues paid is “The Whole Hood,” where he successfully assumes the role of the vet overseeing “kids I used to see on the block on they bikes / this shit is evolution, now they pickin’ up mics.” A process in which Madd Kapp assumedly played a pivotal role: “Turned raggedy-ass rappers to real MC’s / the whole motherfuckin’ hood changed thanks to me.” That’s quite a claim, especially when he’s been active “from Downriver to the night clubs up in the D.” True or not, Madd Kapp comes across believable in these types of songs, another one being “Makin Moves,” a business plan put to music from a rapper who’s determined to not “gon’ be another name on the flyer.” Both these tracks work last but not least thanks to the production, which is the brand of up-to-date, heavyweight hustler hip-hop you hear on commercial releases. Unlike mainstream MC’s, however, Kapp’s not pressed to present himself in one particular fashion. As he reasons in “Outta Line,” “Fuck an image, how can I lie to me?”

If Madd Kapp was signed to a major, “Less Than Zero”‘d probably have been forced to take just one or maybe two of the many directions this indie release offers. Without these constraints, we get everything from straight up hip-hop to bitter relationship tales over driving indie rock guitars. Yet that also means that we have to sit through older and/or not-so-original material that Kapp couldn’t part with once it came to his debut. “Who Do You Love” is one such track, a profanity-free ode to a down-ass chick that musically gets just by by adding some instrumental variation (guitar and piano solos) to an uninspired hook sample from LL Cool J’s “Loungin’.” But the song’s death knell are Madd Kapp’s painfully obvious 2Pac patterns. “Angels Sing” is what happens when your average amateur rapper hears Kanye West’s “Jesus Walks” and decides to pen his own rap spiritual. “III” is forced lyrical creativity and reminds us that rappers should leave numerology alone if they’re not Pharoahe Monch or Canibus. Worse even, what other Caucasian rappers might have flipped into a sarcastic observation just sounds strange coming from Madd Kapp: “It’s three more white rappers in line behind me / at a table for three, havin’ a seance with John Wayne, Elvis and me.” Huh?

“I get a funny feelin’ when I cross over Abner Mountain
cause when I make it to the fork in the road it’s all my relatives’ houses
All the Mullens and the Halls and the Tacketts and all the Johnsons
My grandfather Orwell is a man of the cloth, he says the Lord is watchin’
I get a blast from the past when I walk up Caleb Fork
I take a walk to the coalmine to say a little prayer to the Lord
The first time I ever climbed the mountain was with my uncle Jack
Draggin’ a cooler full of beer with old shoes and no shirt on my back
I wanna go back, I wanna go back
to God’s Country, where the grass is green
and the mountains go as far as the eye can see
in God’s Country, where it stays the same
Time moves right along but my heart remains
in God’s Country…”

One of Madd Kapp’s assets is his solid singing voice, which he puts to good use on “Pay Attention,” food for thought he serves with guests Ace and Swigz over an incredibly delicate beat. Here Madd Kapp proves his ability to match words and music:

“Writin’ this song is like God’s controllin’ my pen
After the playback I’ll never be the same again
It’s like my songs are my kids, I love to see ’em do well
but it isn’t worth a trip to the pits of hell
I’m a wordsmith, I love tuggin’ at your emotions
Human nature intrigues me, my mind stays open
and focused; it’s not about the diamonds and girls
cause for me it’s about givin’ birth to the world
It’s spiritual, I care too damn much to lie
and it’s beautiful, the way these lyrics make me feel high
I make jokes, but only in the spirit of competition
but some knuckleheads act hard and just don’t listen
They rather brag and talk about the things they possess
That’s all they got, cause they personal life’s a fuckin’ mess
And the moral of the story isn’t that damn deep:
you dream about somethin’ other than yourself in your sleep”

Social and psychological commentary also comes in more direct forms on “Less Than Zero.” “Think About It,” set to a serviceable sped-up soul background, includes some insightful commentary on the exploitation of rap. “When the Children Cry” accuses government of waging wars when children are starving and homeless over a functionally emotional beat. “Fork in the Road” sees Kapp and guests PG13 and Proof bugging over miscellaneous bullshit going on in this world.

“Sweet Mizery” is hardcore underground rap with an emo touch. Accompanied by acoustic guitar plucks and etheral female voices, the rapper describes himself as “a victim of circumstance, addicted to Percodans / burnin’ myself with cigarettes, cuts all on my hands.” The song contains one of the few moments where Madd Kapp gets specific, as he talks about living away from his daughter and realizes, “Now I know the pain that Eminem felt.” Taking the mean “Go Away (Baby Momma)” into account, there’s potential for Marshall Mathers-type drama should Madd Kapp ever make it big.

“The redheaded white boy from the outskirts of Detroit” definitely possesses some of that Detroit swagger that Eminem, Royce da 5’9″, D12, and Obie Trice took to a worldwide stage. He certainly blends right in on the bonus track “Sneak Preview” which features some of “Motor City’s finest.” Vocally a mixture of DMX and Everlast, Madd Kapp has a broader expressional range than these two, switching between spitting rough battle rhymes, bluesy introspection, and even singing with ease. Overall, “Less Than Zero” is a mixed bag with diverse but inconsistent production. That and a handful of filler tracks aside, however, what remains after listening to the CD are the numerous gems that present Madd Kapp as an honest rap cat with lyrical aspirations and the ability to inspire fans and intimidate comp. Concerned with himself when it pertains to rap, concerned about others when life in general is discussed, Madd Kapp finds a familiar balance between his individual story and our collective stories.