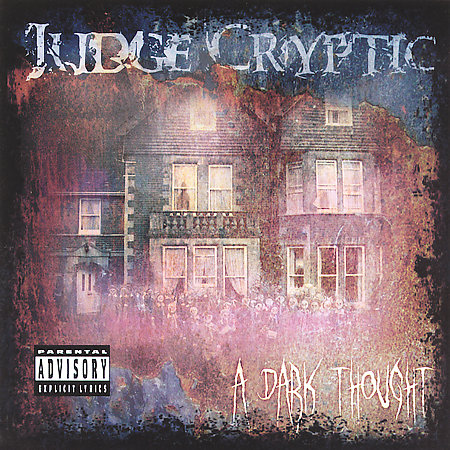 I could sit here and compare Judge Cryptic to other obscure rappers like Genovese (who he sounds like a dead ringer of) or Hom, but that would be counterproductive for most music fans. Let’s be real, “A Dark Thought” is Judge Cryptic’s “Infinite”–the unpolished early effort from Eminem. The infamous release showcased an emcee of great potential, misguided and failing to come into his own.

Judge Cryptic is sort of unfocused in his form of horrorcore rap–it is a form of music that only succeeds if you completely believe the artist or it seems completely in jest, wheras, the CD, “A Dark Thought” is neither throughout.

The initial feel of the album is serious with the howling beat of “Voluntary Solitary” that would fit nicely in a haunted house environment, but the artist’s voice is too high-pitched and lacks the intimidation needed to pull off the subject matter. Lines like, “I’m so anti-federal that I’m haulin’ my ass/ With your head tucked in a bowling ball bag” and “I suggest she starts to evacuate the place/ Before I pull my dick out and ejaculate in her face” litter the track. They’re entertaining enough one-liners, though the sexually perverse stuff is not my forte, but they do not string together in any natural manner. The only connection one bar has to another on most tracks is the fact that they are generally sick and twisted.

Choruses tend to be a problem for the headliner here too. “Cesspool World” features Judge Cryptic simply spelling out his name to bridge the verses. And the continued themes and homicide continue over the more forceful beat.

Surely, many fans of Non Phixion will be naturally drawn to Judge Cryptic and several other acts from the Long Range stable based on the similar subject matter, so it is no surprise that Goretex makes a fitting feature on the cut, “Horrorshow”. The song is a disappointment mostly because of a boring and generic beat that is saved by a dreamy sounding sample at the end of the loop. Nonetheless, it remains forgettable track unless you are an obsessed Goretex fan.

“Sexxxoholic” is the lowpoint of the LP. Judge Cryptic confesses his addiction to sex over a stripped down faux-Pharrell beat. The joint is a pale attempt to have more mass appeal, even though it is doubtful that Judge Cryptic would admit this to be the purpose in the first place.

Meanwhile, it is extremely important to note that Cryptic has moments of clarity and quite honestly has a quick, sharp flow. He outshines all of his guests with the exception of Goretex mentioned earlier to prove it, so his talent seems to supersede most of his peers. It is almost as if the independent label of Long Range has too much control in making JC go the Horrorcore Rap route when it would be much more fitting for him to put out a more accessible album with a series of songs like “Love and Happiness” that samples Al Green’s classic soul hit of the same name. The irony of this standout track is that it truly ‘stands out’ with a different, more optimistically playful feel.

“In the Dark”, another winning track, has an emotive, epic sounding beat. It is an introspective look about living with the difficulties that come with a life. The honesty of it feels like it was torn from the pages of his diary and still has a hint that he has the ability to overcome these nuances that torment him.

Judge Cryptic, is not what his name suggests in terms of songwriting. Rather his rhymes are very overt and in-your-face as most Horrorcore tends to be. “A Dark Thought” is a perpetuating album for him in the fact that it gives him a chance to show his true ability on the mic and vast potential in raw form. Ultimately, Judge Cryptic would be well-suited to heed his own advice that he states on his website by not only making dark music and every once in awhile share some light thoughts.