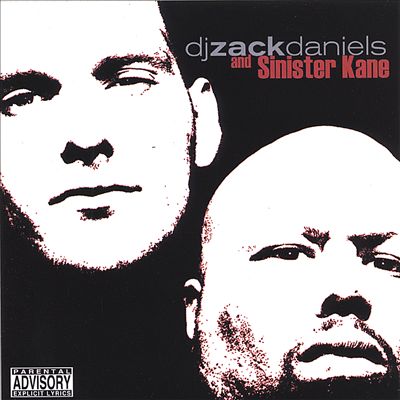 DJ Zack Daniels and Sinister Kane :: Based on a True Story

DJ Zack Daniels has been all over the Detroit-area music scene for the last ten years, DJing clubs, hosting a local radio show, and working with local hip-hop group the Artfull Dodgers. This disc is collaboration with rapper Sinister, a friend of Daniels from the club circuit. Although they hail from Motor City, they aren’t trying to ride the D12/Eminem bandwagon: They are clearly fans of classic hip-hop and the influences they list on their Myspace page include Prince Paul, Grandmaster Flash, DJ Shadow, GZA/Genius, Rakim, Ice Cube and Mos Def. I would also add Blackalicious: Not only does Sinister sound a bit like Gift of Gab, Daniels has the same knack for finding left-field samples for his beats as Chief Xcel.

The album opens up with a freestyle rightly named “Illassintro”, before going into “Sunshower”. The track has a breezy beat layered over a sample of children singing, punctuated by cuts and scratches. Sinister raps:

“I’ve been cursed since my date of birth
Born in a prison cell
Tell me what I’ve done
To have to live in this life of hell
[…]
Foes always hating on you
Hoes want you dead, baby mama wants your income
Always pray for a time to relax so I can chill with the fam
And whip around in the ‘lac
Dear Lord would you please do away with the storm
And then open up the clouds so I can look at the sun?”

There are some solid tracks on this album; “Battleship” is a battle rap constructed around a thundering, symphonic beat; “Based on a True Story” is a slightly self-pitying rant on the struggle to make it that is fully redeemed by some wicked 80s keyboards: female rapper Bena spits some wicked bars on the upbeat “Keep Pushin'”. On the majority of tracks, the beats are on point, laced with a slightly pop vibe. The duo also inserts several freestyles in lieu of skits. The one glaring misstep is. “Kick Ya Stereo Down” a horrendous rap rock track that makes their stabs at Limp Bizkit on “Battleship” a little embarrassing.

While I was feeling Sinister Kane’s gruff flow, I was not as into DJ Zack Daniels. Daniels follows the tradition of hip-hop artists who are great producers but only average rappers. He is old school in the less complimentary sense: his flow is stilted and exaggerated, and he favors clumsy metaphors and similes that reference early 90s movies. For example, on “Falling Off” he raps:

“Yo, I wake up in a cold world
I got a headache and mad problems
They drag me down like dead weight
I’m stressed
Every play and lessons learned the hard way
I feel like Bill Murray in Groundhog’s Day
Falling Down like Michael Douglas
Situation is hopeless
I’m frustrated like a genius who don’t know shit”

Midway through, the track devolves into a violent fantasy, which sees the protagonist going on a crime spree of robbery, murder, and rape:

“Go up to the murder scene
Cut out the car fast
Find some other fool tapping that ass
Blast through his dome
He never saw it coming
Limp off the bed
She’s screaming as I come in
Shut up, bitch, I’ve had a real bad day
So you about to die in a real bad way
Knocked her unconscious
Duck taped her up then I raped the slut
Before I escaped the cut”

I’ve always had issues with the misogyny in hip-hop, and I can’t get with people rapping about rape, even if it is under the guise of a “character.” That women-hating vibe resurfaces several times during the album, with Sinister dissing his baby mama on a few tracks, and some over-emphatic uses of the word “btich” on others. Maybe a lot of hip-hop fans won’t have any issues with this, but I found it grating, an unnecessary step backwards from a duo that seemed to be trying for something more enlightened.

Daniels and Sinister are at their strongest on introspective songs like “Life is Like A Song”. While a lot of rappers are obsessed with the grind of selling drugs to survive, Daniels and Sinister are obsessed with the grind of being underpaid and unknown musicians trying to make a name for themselves. Their lyrics have a refreshing honesty. Over a mournful guitar layered on a sped-up soul sample, Daniels documents this struggle:

“Picture me
These raps record the history
Real life shit in explicit vivid imagery
The money, the drugs, and the girls
I’ve been around that
I believe this music is my religion
This gift I’ve been given
Is the reason I’m still living
Listen, this music saved my life
The rhythm gave me light”

There are some great beats on this album, and some decent rhymes. I appreciated Daniels bringing the DJ back into prominence in hip-hop, something that has been lost as the producer has taken the center stage. If the duo work on their flow and lyrics, they could be a force to contend with.