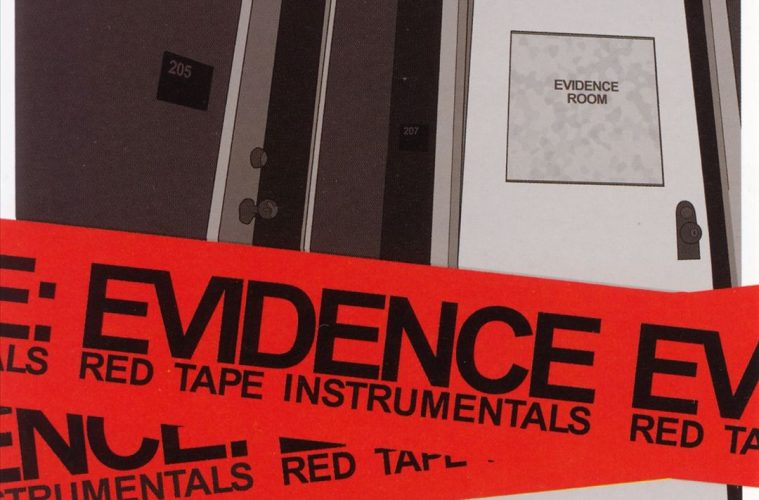 Three years ago when reviewing “Yellow Tape Instrumentals” I made this statement: “This may be the first official album of Evidence instrumentals, but hopefully it’s far from the last.” Those hopes were unexpectedly answered in the form of a blowout sale at the long-running and popular website HipHopSite.com, when I saw that Ev had dropped a new instrumental album fresh for 2007 (you SUCKAZZZZZ) and I could cop it for a now reduced 30% off. Passing up a deal like that was never even an option. “Yellow Tape Instrumenals” was one of 2004’s most refreshing hip-hop albums because it brought things into stark relief – no egotistical MC’s or braggadocious lyrics, just a selection of Ev’s best beats from both known hits and obscure shit. When Evidence is on his A game, he’s one of the top producers in rap today.

So here we have “Red Tape Instrumentals” and once again Ev professes that “the song titles have been changed to protect the innocent.” The beats herein are described as music Ev crafted between 2000 and 2005, with a couple of unreleased tracks thrown in for good measure. The selection is spicy and surprising, as Ev’s beats profess a love for all different genres of hip-hop with a bias towards none. “Southwest” is the perfect concoction for a group like U.G.K. to be rocking – quickly tapped drums, a bassline groove that evokes memories of 70’s blaxploitation films, and an undeniably dirty dirty funk. “Word of Mouth” sounds like an old school Jay-Z track, layered with thick pianos and smooth breakdowns, containing double backs and changes where you would expect the rapper to stop his flow for a moment and let shit sink in. “Travel Plans” is a perfect Dilated Peoples beat to the point you expect Rakaa Iriscience to bust in on the silence at any moment and talk about taking a plane from London to Thailand just to rock a jam. Stylistically Ev rocks it from East to West and all points in between, covering all and leaving out none.

Curiously though “Red Tape Instrumentals” doesn’t succeed at the same level of its predecessor. While the album starts out strongly enough with “Hustle On,” a beat that sounds eeriely close to production by his contemporary Alchemist, things are somewhat muddled from this point on. Being one of hip-hop’s greatest producers is both a gift and a curse – it’s damn hard to make a bad track, but sometimes when you’re so consistantly good nothing stands out that much. There’s no “Rapid Transit” here, an Evidence beat so strong that it not only drops your jaw but rips it straight out of your skull and leaves it quivering on the floor. Tracks like “The Vacation” feel like they’re going through the motions – a listless ba-boom-tap beat, a two or three note variance melody, and one soul sample used ad nauseum throughout. A struggling rapper might shell out grands for an Ev beat like this, but they certainly wouldn’t be getting the best that he’s capable of. “Amsterdam” may be the perfect example – while this instrumental was perfectly acceptable as the backdrop for a skit on “20/20” there’s nothing special or interesting about it when presented on its own with nobody talking over it.

There’s still plenty on the “Red Tape Instrumentals” to write home about though. “The Bop” features a beat so dirty it sounds like someone’s speaking bass to you through a vocoder. “Hourglass” has light airy flute sounds so uplifting it’s a shame the track is only 1:50. “The 7th Letter” is exactly the kind of bombastic Dilated style track one wants to hear from Ev, it’s just a shame these are fewer and farther between than they were on his “Yellow Tape.” This is not a bad album by any stretch of the imagination, but Evidence fans will expect more and they have a right to do so. Even hardcore fans who will be happy with “Red Tape Instrumentals” may wind up wondering if Ev really did put his best work from 2000-2005 on it or if he left a lot out for fear that changing names to protect the innocent wouldn’t protect HIM from a lawsuit happy rapper mad their beat had been recycled.