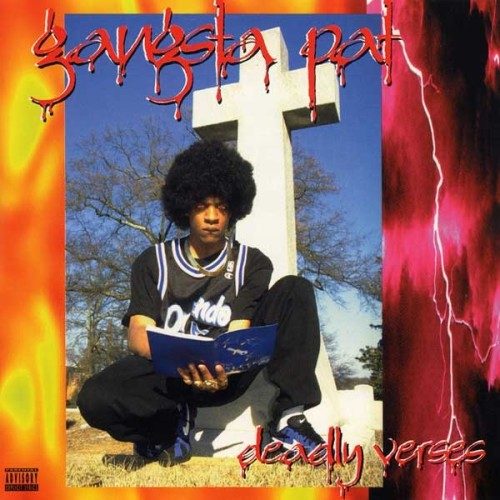 Gangsta Pat has more in common with 8Ball & MJG and the Three Six Mafia than being from the same city. Gangsta Pat joins those two groups as being one of the only rap acts out of Memphis who got signed to a major label deal during the early 1990s. Yet Gangsta Pat remains an underground legend while his peers have had continued success in the mainstream. The big positive in the whole situation is that Gangsta Pat was able to remain true to his hardcore roots after leaving Atlantic without the pressure of including radio hits on his album. Presumably, this is why Gangsta Pat seems to have gotten a bigger fan base after being dropped from Atlantic. Of his multiple releases since 1991, â€œDeadly Versesâ€ stands out as the most well known/popular. Some of Pat’s earlier work was criticized for being a mere mimicry of West Coast gangsta rap, but â€œDeadly Versesâ€ was as true to his Memphis roots as Gangsta Pat ever got.

With only 10 tracks, the album was a short but lasting experience. Produced entirely by Pat, the production was by no means complex or innovative. Instead, Pat tuned in to the menacing production made famous by the Three Six Mafia and crafted his own beats in the same manner. â€œDeadly Versesâ€ borrows the pianos from the movie â€œHalloweenâ€ and throws in a funky bass line to complete the song. â€œI Wanna Smokeâ€ uses the same sample used on LL Cool J’s â€œHey Loverâ€ which was also recently used on the original mix for Trae’s â€œSwang.â€ â€œSmoke With The Devilâ€ is as close as Pat comes to reverting to his West Coast G-Funk influences with the high-pitched synths that slide through the track. Surprisingly competent, Gangsta Pat’s beats still are clearly influenced by Memphis and nothing original.

Given the album’s title, it’s clear that the focus is more on the lyrics rather than the production and Gangsta Pat delivers them with the same speed and energy his Memphis peers used at the time. As is the case with Memphis music from the 1990s, Gangsta Pat’s style is a love it or hate it affair. On paper his verses are nothing special:

The simplicity in the lyrics begs an explanation as to what is so deadly about his verses. The answer lies in the delivery which has to be heard to be understood. The basic answer is that Gangsta Pat is good at rapping fast. In all honesty it’s a skill that is not easy to master and can be impressive. The speed, breath control, and energy on track’s like â€œDeadly Versesâ€ and â€œI Wanna Smokeâ€ are impressive and transform average lyrics into enjoyable tracks. To his credit, parts of his verses rise above the average as is the case where he contemplates suicide on â€œDeadly Versesâ€ but backs off since he’s not sure if they’ll let him rap in the afterlife. When Gangsta Pat deviates from his fast flow attack the results are mixed. â€œO.J. Murder Storyâ€ would be a success if not for the perplexing subject matter where Pat says he committed the murders. â€œTear The Club Upâ€ probably provides the best answer as to why Pat never gained the same notoriety of his Memphis counterparts. To be clear, the term â€œtear the club upâ€ is nothing new or unique to the Three Six Mafia â€“ they merely made the term famous. So this is not an issue of Pat biting anyone’s style, but it is a great example of two artists making songs about the same thing but with different results. Gangsta Pat’s version is an uninspired call and response song where he basically shouts out every artist in Memphis while repeating either â€œtear the club upâ€ or â€œsmoke a blunt foolâ€ after each name. On the other hand the Three Six Mafia made a song that could inspire a club full of law-abiding citizens to literally tear the club up.

Overall, Gangsta Pat definitely shows why he continues to maintain a strong underground following among fans of hardcore gangsta rap. For those who are fans of Memphis rap or guys like Esham and Ganksta Nip, this album provides plenty of dope songs. Mainstream fans will probably not find more than one or two songs worth peeping on this CD, which ultimately answers the question as to why Pat never blew up on a major label. Other Memphis acts have found ways to make their gangsta raps accessible while Pat seems content keeping it hardcore to the fullest. The formula doesn’t produce classic albums, but it works for Pat and the thousands of fans he’s gained over the years.