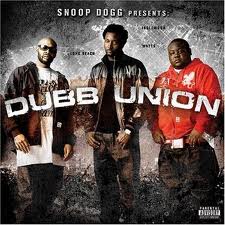 I’m always wary of albums whose titles begin “[Random Well-Known Rapper] Presents [Random Unknown Crew].” To me, this usually just screams, “Weed carriers!” and I go on my merry way. Lately, however, I’ve had to reconsider this view as the result of a couple high quality debut albums that were presented this way. The first, and by far the best, was Akir’s debut “Legacy,” which was officially “presented by” Immortal Technique. Maybe because Tech is much more than your average rapper bringing along his homies, this one easily merited the high-level endorsement and was one of my favorite albums of last year. Then again, a similar Immortal Technique recommendation of the Poison Pen album did little to distract from that release’s notably mediocre quality.

Now Snoop Dogg â€“ who has already introduced a number of artists, including Tha Eastsidaz and his Doggy Style Allstars â€“ is presenting for your enjoyment Dubb Union. This trio consists of Inglewood’s Damani, Watts’ Bad Lucc, and Long Beach’s Soopafly. The latter has been a mainstay on West Coast work since his early days playing keys for Snoop and Dre on songs like “Murder Was the Case.” Formerly known as Westurn Union, the group changed its moniker to appease the similarly named parcel delivery service, which was threatening a lawsuit (spelling differences be damned).

Given the hit-or-miss nature of Snoop’s other collaborations, skepticism was definitely in order for Dubb U, even with appearances by Snoop, Daz, and Kurupt and production by Soopafly and Hi-Tek. And on initial listens, you might dismiss them as just another West Coast act, as their sound and subject matter are exactly what you would expect. Further investigation, however, reveals this to be a surprisingly good album from a group of guys you probably weren’t too familiar with before.

With Soopafly producing the majority of the tracks, the music is consistently above average even if it is somewhat predictable. A Jelly Roll-type bounce pervades the album, which serves these LA MCs well. Soopa’s keys set the mood, with all manner of effects laid over them, and the deep 808 thump completes the package. Hi-Tek also contributes a couple of laid-back bangers that fit in perfectly. The mix of acoustic piano octaves and orchestral synth strings on “We Both Know” create an incessant pulse that works in spite, or perhaps because of, the disparate elements. “Bacc Talk” stands out with its soul vocal sample interpolated throughout, but all the layered funk sounds tweaked ever so slightly bring it together and keep it in line with the rest of the music.

What really makes the album work, however, is the display of the three MCs. None of them is going to break any new ground in terms of metaphorical wordplay or lyrical dexterity. Their biggest assets are their charisma, flows, and chemistry, which keep the music compelling even when all other indicators point to average results. In listening day in and day out to super-lyrical underground acts, you can occasionally lose sight of just how important it is to be able to maintain listeners’ attention with nothing more than the quality of a voice or the timing of a well-placed syllable. I appreciate verbal gymnastics as much as the next rap critic, but nothing can make up for sheer presence on the mic, which can transform a decent performance into something you keep coming back to.

It is this type of swagger that the Dubb Union MCs have in abundance. Their Los Angeles roots come through loud and clear, especially in flows that are variably reminiscent of many of the city’s biggest names, including those that show up on the album. The ghosts of Kurupt and Daz loom large in a number of places, especially from Damani and Bad Lucc. Soopafly channels them too, although his own similarities lie closer to Snoop than the DPG brethren. Their fluency at playing off each other is evident as well, and they put the skill to good use, trading off lines and couplets often rather than breaking the songs down into the one-MC-per-verse formula. They do this exceptionally well on the album’s best song, “Sign Language,” which wisely and cleverly looks at the gang sign phenomenon without either belittling or glorifying it. Soopafly’s keys once again set the tone for the MCs to flow like water over another bangin’ beat, and their tag-team efforts keep the momentum up the whole way through. This song also showcases the crew’s ability to pen a nice hook, which is another underrated skill which is harder than Nate and 50 make it look (yes, 50 does do a few things well). They use these same techniques to good effect on the BJ and Daz Dillinger collaboration “Westurn Union!!” and “Dub You!!” featuring Kurupt and Traci Nelson. This last song is another example of how good MCs can switch up their flow to match the beat, something which is lacking in a lot of releases by up and coming artists.

The LA hip hop scene has been stronger this century than most care to acknowledge, but it is this middle ground of G-funk-inflected, below-the-radar rap that has been noticeably absent. While the eclectic and backpacker crowds have had their share of shine, and The Game has dominated everything at the other end of the spectrum, Dubb Union represent what is hopefully the beginning of a new wave of talented rappers who can remake the West in their own image by both using the classic sound and adapting it to their purposes. Whether or not they’re given the nod by Snoop, they’re worthy of a listen.