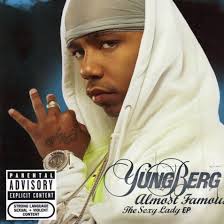 I’m sure Christian ‘Yung Berg’ Ward has big things in his future. He’s only 21 years old and already has cracked the top 10 of Billboard’s Hot Rap Tracks with his first single “Sexy Lady.” In fact the song is so hot that copies of his full length album “Look What You Made Me” were already starting to leak on the internet, so Epic and Koch Recordsdecided to beat the bootleggers at their own game by releasing the “Almost Famous EP.” For this writer though it’s hard to discern whether the song is genuinely hot because Yung Berg is that fire or whether people are subconciously latching onto it because of the James Bond “Diamonds Are Forever” sample. While Kanye’s track featured signature vocal samples from Shirley Bassey (which she was reportedly furious about) in the chorus, Berg’s “Sexy Lady” has a more subtle loop and features no singing from Bassey at all. In fact the only singing to be found on the track is from R&B crooner Junior. Here’s a little sample of what Berg has to say on the song:

“Oh – ye damn right babygirl’s a diva
But e’rytime she out with me she be blowin reefer
In the Coupe lookin better than the Mona Lisa
Tunin into my songs thinkin ’bout features
She know her little nigga spit ether
And them grown dudes really don’t know how to treat her
So she rock with me, and I roll wit her
Cause I’m a d-boy, and she’s a go getter”

Unfortunately Berg may come to regret that within two bars after Junior’s chorus he drops the line “she love it when I throw it deep like Michael Vick.” That’s NOT a good look. Now obviously the song was recorded a while ago and only just recently charted, so it can’t really be argued Berg was being tasteless, but I wouldn’t be surprised if some broadcasters choose to edit or censor that line. Hip-Hop is littered with years and years of Vick references though so in the end it probably doesn’t matter, nor does the fact Berg’s producer Rob Holladay had the same inspiration as Kanyeezy but decided to flip it a different way. One could argue that it rips off an idea Kanye had over two years ago but one can just as easily argue the only time it’s patently obvious they’re the same is in the opening ten seconds of “Sexy Lady” – after that it’s very easy to space it out. Oddly instead of playing down the similarity between the two the “Sexy Lady Remix” actually plays it UP by giving the song a stronger beat. The new cast on the rap ranges from the Dirty South to the East coast as Rich Boy and Jim Jones both provide new verses – peep the vocals from the latter:

“It’s hot days in December
We down Miami, drop tops in the winter
We off ocean, the Coupe doors open
And front wet woolies off Superman potion
Casino slang, try and kick game
She was flyer than a plane from her toes to the Gucci frame
(She was fly) Damn, but I’m sittin on two hundred thou’
I can’t front cause I’m diggin lil’ momma’s style”

Some might be tempted to say the “Almost Famous EP” is a glorified CD maxi single, but Berg doesn’t load this release up with “Sexy Lady” instrumentals and radio edits – the other four songs are 100% legit. “Into It” has some surprisingly slick samples from “The Look of Love” and “Long Way 2 Go” – give producer JFK his due for a fire track. Unfortunately featuring Tony Loco and JFK on the track vocally is a mistake because people just barely know Berg right now as is and when you’ve only got six tracks it’s not the right time to get even NEWER artists over. The more sensible approach is to a duet between Berg and an ALREADY established artist, and “Where Do We Go” fits the bill by linking two Chicago natives together – Yung Berg and Twista. JFK really got me open on this one by sampling THE ALAN PARSONS PROJECT of all things – if you thought that was just a joke from Austin Powers then listen to this song and prepare to get your dome blown. JFK’s only dissapointing beat is on the title track – it’s not bad, it’s just mild by comparison.

The EP’s closing track is a little confusing – it’s not actually a Yung Berg song, it’s a Nikki Flores song called “Painkiller” FEATURING Yung Berg as a guest MC. Undoubtedly this just proves how quickly Berg’s people wanted to get product into stores – they took anything that was mastered and ready to go with all the samples cleared and put it out there. The shocker is that for a rush job the “Almost Famous EP” works surprisingly well. Berg benefits from the short length of this release in an unexpected way – there’s not enough lyrical material to judge his rap ability too harshly. His tone and style are somewhat derivative of Lil Wayne, but sound closer to a St. Louis style Nelly twang. The diction and the flow are smooth enough to pass however only time will tell if Berg can write a whole album’s worth of rhymes and not become repetitive or annoying.