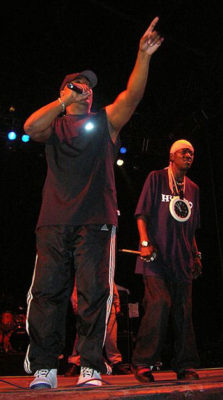 Bring the Noise: A Few Words From Prof. Mike Jordan

If seeing Public Enemy inducted into the Rock And Roll Hall of Fame AND seeing Rick Rubin and Russell Simmons standing next to each other while PE performed didn’t bring tears to your eyes, well that means you didn’t live this Hip Hop shit.

Living it and listening to it are two totally different things. Please know there’s nothing wrong with that. Some of you were born too late. Nothing you can do about that. I am an advocate for new school hip hop but young folks PLEASE don’t forget, there were parallels between the civil rights movement and the initial hip hop movement. Maybe not the same magnitude, of course, but it was a fight for us to get it on the radio, on TV, in record stores, and around the world.

Before Bentleys, going platinum, iced out medallions, and Beats by Dre headphones these people CHANGED THE WORLD and were instrumental in making me the man I am today. That may not mean shit to you but that means everything to me. So when you hear someone talking about the “good old days” don’t write them off. By the same token though, when you hear someone going on about Drake, or Lil Wayne or 2 Chainz don’t forget they are our family too. They are the results of our struggle, our fight, our belief that we knew back in the days rap would never die, despite what someone names their album, says on a t shirt or some old school person tries to tell you. It’s all hip hop. You may not like em but that’s our family too.

Sometimes the young folks forget to tell Public Enemy, and Rick and Russell thanks. Don’t blame them. I mean if you’re a young hip hopper, how could you possibly know the hard work it took for you to be able to listen to rap all day every day on the radio? It’s not fair to be mad at ignorance and please know, there’s nothing wrong with ignorance. It means you weren’t educated. If you know better and haven’t tried to teach and you spend your time chastising, you are the real problem. There’s a difference in lifting up and putting down.

Let me tell you though. Listening to the radio all day to hear the one rap song they would play twice a day was hard. So when I see Public Enemy and I think of Cash Money, I’m not crazy. I’m just acknowledging my whole family. Yeah we all got cousins that do stupid shit but we gotta love them anyway because hey, who else will?

So on behalf of the old school thanks new school for keeping the dream alive. I may not always agree with what you have to say but I’m always gonna see to it you get to say it. And fellow old schoolers, the new school would like to thank you for creating the opportunity to be heard. They may not always act grateful but any rapper that started at the bottom and made it to the top is thankful you picked up a mic. Trust me.

Most of all though tonight on behalf of myself, my sons, and The Class thanks P.E. for telling us to Bring the Noise and Fight the Power. I will be hip hop ’til I die and from Run DMC to Maybach Music, I’ll always be proud not even a nation of hundreds of millions could hold us back.