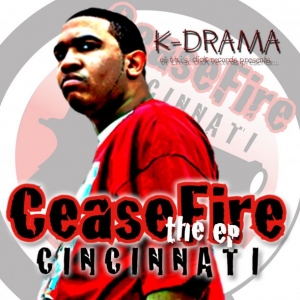 Homicide is the leading cause of death among African-American men aged 15-34. African-Americans make up about 12% of the U.S. population, yet commit 50% of the homicides and make up about 50% of the victims, according to the Bureau of Justice Statistics. Cincinnati has seen a dramatic spike in gun violence this century, with yearly homicide figures in the triple digits.

Cincinnati Christian rapper K-Drama decided to raise awareness about the issue by releasing the “Cease Fire Cincinnati” E.P. The proceeds of the disc go to funding education efforts in the Cincinnati area aimed at stopping violent crime. K-Drama already has three albums under his belt, and is releasing a fourth album soon, so this project is a way to give back to the community.

I really like the message of this disc. I wish there were more rappers speaking out against violence rather than bragging about their arsenal and threatening to kill anyone who disses them. The track “Cease Fire” is a plea for Cincinnati to put down its arms:

“No more time for talk, put down the telephone
You have no right to complain if all you do is sit at home
And whine all day about how the shots fire
When you’re capable of doing something about it
Like marching down the street screaming, “cool down the heat”
Quit sitting on the bleachers, you can be a teacher
I’m talking to you preachers, practice what you preach sir
I should see you and your congregation on the streets sir
The labor’s plenty, but the workers are few
If you wanna see change then it starts with you
It starts with me, that’s why you see me out on the block yellin
Let the shots stop poppin from the glock that you’re rockin’
You know the beat is knockin, we’s about to drop in
And change the norms about guns, so come on and hop in
We need your help! Naw, we ain’t tired
We just need a gang of people on the streets yelling”

I especially liked the lyrics to “Empathy”, which repeats the chorus from different perspectives, so that it becomes “Me, you, us”. It’s a great way of pointing out how violence effects everyone in the community, and how the victims and perpetrators could easily be you or your family.

While I am definitely into K-Drama’s message, I’m not nearly as excited about his delivery. Most of the time he raps like he is preaching, and the focus on the message means that at times the flow suffers. I don’t know how effective it is to use music to explicitly preach. I think a lot of the hip hop audience is sophisticated enough to be turned off the moment they sense that someone is trying to tell them what to do, and so K-Drama’s words may fall upon deaf ears. Musically, it’s pretty middling, with generic, dramatic synths, hi-hats, and snare snaps.

“Cease Fire Cincinnati” has its heart in the right place. I’m not sure how effective it will be in getting people to lay their arms down, but I applaud K-Drama’s efforts and wish him luck. If you aren’t part of the solution, you are part of the problem, and K-Drama is definitely part of the solution.