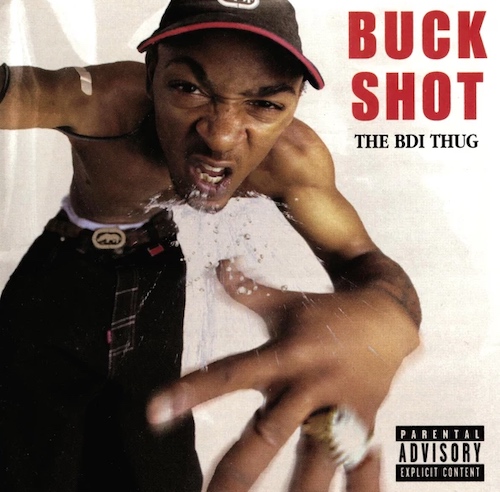 Do you ever feel like you need to apologize for a review before you even start? No? Just me? Well I apologize in advance for “The BDI Thug.” Buckshot Shorty is one of my favorite rappers. Now in pure lyric writing and technical acumen I can’t rate him above the likes of Pharoahe Monch, Aceyalone, Black Thought or Gift of Gab (RIP), but from the first time I heard Black Moon through 2003 he was on a ten year run of dropping ill shit. There was a melodic hypnotic musicality to his flow that could make even the most banal topics mesmerizing. To me he was the de facto leader of the Boot Camp Clik, which I think is fair when you consider that Duck Down Records wouldn’t exist without him and Dru Ha, and the flow of classic rap records from Duck Down cemented my affection for Buckshot. It would be fair to say for a time I thought he could do no wrong.

“The BDI Thug” broke my heart. I’m sorry I have to say it about a man I admire and respect so much, but this album is no good. In theory Buckshot had everything going for him here. He had the respect of his hard rock Black Moon/BCC/Duck Down loyalists, and he had a nickname personally given to him by the late Tupac Shakur to market his first solo album with. The buzz was there, the album should have been fire, and to this day I’m baffled by how much of a let down the album is. I don’t know Master Beats, and I don’t want to know him, but Buckshot entrusted him enough to produce the single “Take It to the Streets” and it’s terrible. I’m not going to mince words here — it sounds like the B-side to a N.O.R.E. single that should have been forgotten entirely. It’s all drums and noise with no melody and nothing head nodding. Loading it up with no name guests like Swan and Blue Flame doesn’t help. Only Half-A-Mill rates on it even a little bit.

“Heavy Weighters” would have been a better choice thanks to Just Blaze, but again the sound doesn’t fit Buckshot Shorty at all. The amped up instrumental would be just right for M.O.P. or Fat Joe, and the BDI Thug sounds like he’s trying to get in where he can fit in next to the other emcees. How did this happen? The master of smooth gangster jazz sounding incongruous and out of place on his first solo album. That should have been IMPOSSIBLE. Somebody, anybody should have stepped in before things got this far. If they had a repugnant song like “My Bitches & My Niggaz” would never have happened. It sounds like Buckshot wants to create the new version of Bonnie & Clyde, but Harly Hearts is no Yo-Yo and unfortunately Buckshot is no Ice Cube here either. Producer Boogie Brown stinks.

So many of these songs are so bad that it’s hard to even cite the individual mistakes. It’s far more rare and valuable to note the few things that actually sound like Buckshot Shorty the way you’d expect — the DJ Akshun produced “Trapped” being one such rarity. It has that unearthly jazz sound of a classic Black Moon track, and Buckshot’s paranoia and uncertainly bleed through the bars right into the chorus. “I feel like I’m trapped in the world of rap.” Perhaps he was. Buckshot was trapped by his legendary status, the expectations of his fans, and the fact he had invested so much time and effort into recording an album with 2Pac that would never be released.

“Critics can get the dick, know what I’m saying?” Buck, I hear you loud and clear on “Glide With Me.” I know we’re just talking about it while you’re the ones doing it. I know it’s personal for you. Even though you’re making music to be sold to the masses, there’s a piece of your heart in your art, and it undoubtedly wounds you to have somebody saying things like “Glide With Me sounds like somebody farted into a sampler and shitted out a track.” I’m sorry for that. Nothing about “The BDI Thug” changes how I feel about you. For me you long since transcended to a point where one bad album can’t erase all the good ones — in a group, as a soloist, or in collaboration with some of rap’s top producers. I don’t know why this happened and I don’t want to be mean on purpose, but I feel like it’s a hot mess every time I hear it and that opinion never changes. It’s your art and you’re entitled to make it any way you like, but for me it’s unlistenable.