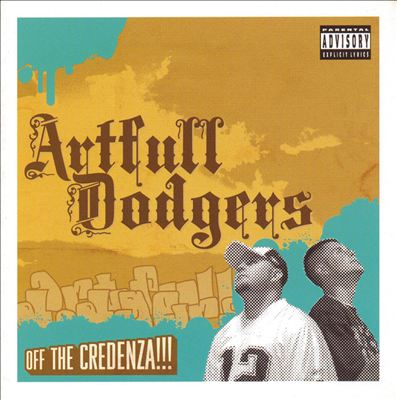 Artfull Dodgers :: Off the Credenza!!!

Though likely to be new to most readers, Artfull Dodgers are not newcomers to the rap game. Their bio informs us that the group members have been in the rap game for well over 10 years. Confined mostly to the Midwest, the underground collective reps Michigan and an old school sound on their latest LP. Consisting of rappers B. Gozza and Jackpot and DJ Sir Real, the trio sets up high expectations for “Off The Credenza!!!” as it is an LP three years in the making. The LP showcases a trio of artists that definitely have a love of the art form, but are only average in comparison to the peers they hold in heavy esteem.

“Take a Look Around” kicks things off with lackluster boasts typical of underground albums:

“Take a look around when the Dodgers are in town
Any city, any state we’ve been known to cover ground
We’ve been known to hover crowds, Get them lifted off the sound
Watch them elevate, while my target spits rounds
Ladies lift they gowns, rappers getting clowned”

“Remember” follows that with more typical raps as the crew reminisces on growing up as fans of hip-hop:

“I used to walk down the street with the boom box on my shoulder
Letting all the neighbor kids know that one day I’d be the holder
Of the microphone when I got a little older
Baggy jeans, kool-aid watch would be nice in the recorder

It was back in eighty seven when Brady was eleven
Drift from the latest lesson, crazy focused, obsessive
We Run like DMC to the local record store
Cop the latest rap tapes always checking for more”

The song is a concept that’s been done to death and gets tired even from mainstream artists. The crew does try to vary things and get fresh, but at 23 tracks the underground act sounds very redundant and familiar by the end of the album.

The tracks that aren’t your typical underground raps still remain around the average level. “Ain’t That A Bitch” runs through the crew’s disappointing encounters with females, but they seem unaware that the fact they use the word “bitch” in a song about women might be the reason they get no love from the ladies. “Breaking News” is not fresh in the sense the concept has been done before, but it is different for the crew as they attempt storytelling that borders on street raps.:

The crew gets points for trying something out of their comfort zone, but it is clear they are uncomfortable in the storytelling realm as the rappers adapt choppy, simple flows and monosyllabic rhyme patterns. The production is the only thing that elevates Artfull Dodgers above average, if just slightly. Handled mostly in house by Gozza and his Earthmovers Productions, the soulful and laidback production fits quite well for what the group tries to do. Though Gozza fails to cook up any certified underground bangers, tracks like “Close Your Eyes” come close.

It would be unfair to say Gozza and Jackpot are bad rappers, but the duo is average at best. Lyrically they fail to bring anything you haven’t heard in some form before. Flow wise they are unremarkable. The production is the only thing that stands out at moments. The crew does come through for a few quality songs, but it isn’t enough to support the weight of the 15 plus other songs that are merely average. Fans of underground rap will probably be more forgiving of Artfull Dodgers’ shortcomings, but everyone else would be better off ingesting the crew in smaller doses.