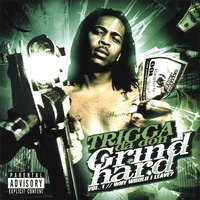 This album has been sitting on my desk, gathering dust, for a long time now. It’s definitely not fair to the artists, who sometimes read these reviews if they aren’t commercially established and need the publicity to promote their new release. What is it then, that makes a reviewer like myself dread writing a critique of an album like this? Perception? Expectations? A little bit of both, really. Trigga da Don’s album cover for “Grind Hard” is something like what you would see on the mixtape circuit in which the featured artist in-your-face, mean-mugging, with one fistful of benjamins and the other sporting a semi-automatic weapon. To accentuate the artistry of the front, the letters that make up the name and title are sprawled across the bottom portion in some glossy font–it all looks horribly cliche’. It’s not fair to the artist, because despite the negative indication presented right off the bat, he might just have something deeper to say. Let’s see if Trigga da Don has the gumption to overshadow the typical gangster rapper that the market is painfully flooded with.

Trigga da Don is the co-owner of the Most Wanted Crown Holders. This seems to be just one of his “100 Hustles” that he gloats about having on a track on “Grind Hard” by that very name. He is also the main producer of the small label, amongst other things. Given the fact that on The Crown Holders website (www.crownholders.com) the store is not active to take orders and the media is just one song, it is safe to say that it is a trying process to come up through the ranks of the rap world. That’s the thing, rappers need to do something to stand apart from one another, whether it be a gimmick or the enlightening presence of actual skills.

There’s nothing about “I’m Bout Dat Action” that deserves to have the status of being the first single above any other cut on the album. Nonetheless, this was the track chosen by Trigga to be the one that ought to appeal to hordes of fans. The beat and chorus may be slightly sharper than the clutter of music that overtakes “Grind Hard”, yet, nothing more. It features a gang of unknowns: D-Dot (not the one from Bad Boy), Richard Simpson and Freddy G. All of the emcees have similar dirty South flow and simplistic lyrics, often with a humorous slant.

The title track does not match the poignancy of the 50 Cent or Papoose tracks with the same name that garnered mixtape love last year. The synthetic beat is driven by a long tone that drastically changes pitches. Much of the production sounds like it is straight on a PC sound kit; therefore, there is a major lack of depth and it certainly feels like ingredients are missing. Most rap albums like this have heavy, street-rattling, bass, whereas on “Grind Hard” there is a noticeable reduction in decibels. Moreover, the majority of the tracks seem stripped down and still fail to produce a raw sensation. This lyrical exercise is a good example of the kind of thuggery you will hear from Trigga:

“Smile for the camera-take a picture
It’ll last longer, you’re pussy nigga
Don’t make me turn that white T into a tye dye
When them shots fly by
They sound like BLA BLA
Ta-Dah! Abra Cababra, ka-POOF!
I’m the truth-living proof
When I step in the booth
Compared to you I’m a God
I’ve been like Pac- I’mma make it even though I’m against all odds
Let’s take a rain check, a weather warning
You going feel metal stormin’
When that metal on me
Quit all that George Foreman-y’know, grillin’ me
Cuz I sending plenty heat where your children sleep
I’m addressin’ these niggaz, check the recipe nigga
Big, Pac, mix a little Jigga
Boy it’s Trigga da Don in this bitch
Banana clip on I’ma shoot, then I’ma banana split
I feel like Next Friday and shit
I bought your boy’s album, I can’t get jiggy with this shit
I know you sayin’ I need to quit…”

Sadly, many listeners will think he needs to quit, too. The expose’ continues throughout the rest of the verse, feeling like a freestyle of a bunch of braggadocios rhymes simply thrown together. Sometimes Trigga gets a little more serious, but never does he stray from the tired topics of women and hustling. A few lines on the album on ridiculous, like “I shit on a nigga, like a port-a-potty.” The weak verbiage becomes painfully clear in moments like these.

The formula becomes standard as early as the third track, “I Done Told Y’All”. This cut is laced with a screwed and chopped style chorus that repeats “I’m the Don, I’m the fuckin’ Don.” The rest of the album sounds more or less the same besides slight variations where he has a female counterpart irk out the hook. Collaborator, Moana, becomes a regular addition near the end of the album, but it’s too little too late, especially considering that she is nothing special either.

Even at points during “Grind Hard” where one might think that Trigga Da Don is going to reach to a higher level. He fails to deliver. “100 Hustles” sounds like it could be a spiritual successor to Biggie Smalls’ classic “Ten Crack Commandments”, as a concept track, but instead he raps that he has a hundred of ’em and never delves deeper into that idea (of what the hundred are) as he drops more random non-sense; perhaps he only has one hustle after all.

This is an instance where you can judge a book by its cover. There is nothing transcendent about Trigga’s album, as compared to any other run-of-the mill rapper whose album you can cop out of the trunk of their ride. If you are really into the conventional rap scene, then by all means cop this, otherwise it is something that can be passed up with not a second glance. The difficulty in critically analyzing an album that has been done 1,000,001 times before is that there are only so many synonyms for ‘average’.