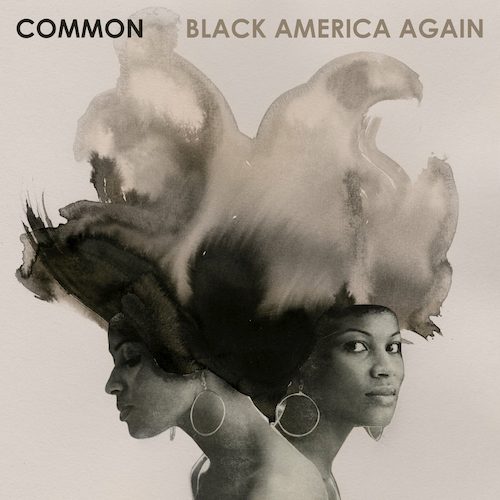 Lonnie Rashid Lynn and I go back a long way. Not personally mind you – I’ve never met the man one on one – but I did drive all the way to Chicago in college just to see him perform at the Metro (and drove back in a literal blizzard to boot). There aren’t that many rappers I would entertain a six hour+ drive for, then or now, let alone on a broke-ass college student’s budget. I felt some type of way about Common though, because to me he was the voice that uplifted the Midwest in general and my favorite city Chicago in particular. I still consider “Resurrection” and “One Day It’ll All Make Sense” to be certified hip-hop classics, and taken on balance Common’s catalogue can rival or surpass almost anyone’s over a two decade span – especially considering the average artist’s career doesn’t even last one-fifth that long. Over that time he transformed from a squeaky voiced emcee just trying to be heard to a prophet of hip-hop, declaring his undying love for “H.E.R.” and honoring that commitment even as his recent career as an actor has blossomed.

“One dream that I had, I was talking to my dad
He said ‘Things ain’t as bad as they seem’
Was this a God dream the way ‘Ye sing it?
The dream seemed to go on as the day lingered
The meaning of life, you can’t frame or name it
True stars, remain like the name of David
Niggaz get foreign cars, and think they made it
It ain’t yours ’til you create it” – “Joy and Peace”

Maintaining your status as a voice for hip-hop, a “rapper actor activist” as Common himself says on “Home,” that’s a tricky proposition especially as you’re entering your 40’s. It would be easy to be accused of being egocentric to think that you’re the leader of a whole movement, or that you still deserved to be held up in the spotlight when so many rappers half your age are trying to get a piece, or (and this might be the trickiest part) being out of touch with the increasingly violent streets of the Chi when your life is now fairly comfortable from a long and successful career. “Black America Again” answers those questions both throughout the length of the album and on the title track in particular, as Common fires an immediate shot across the bow with “Here, we go, here here we go again, Trayvon’ll never get to be an older man.” No matter how much success has changed Common’s circumstances, it hasn’t changed his beliefs:

“Leavin our own to lay in a box
Black mothers’ stomachs stay in a knot
We kill each other — it’s part of the plot
I wish the hatin would stop; WAR!!
In a battle with us
I know that Black Lives Matter and they matter to us
These are the things we gotta discuss
The new plantation – mass incarceration
Instead of educate they’d rather convict the kids
As dirty as the water in Flint, the system is…”

In fact if anything success actually seems to have sharpened Common’s tongue, and given him the unbridled confidence to express his freedom of speech in ways that are guaranteed to push buttons. “You put a nigga in +Star Wars+ – maybe you need two! And then maybe then we’ll believe you.” He’s absolutely unapologetic in the shots he calls, but it’s not one solid hour of beating you over the head with the failure of race relations in the new Trump America. It wouldn’t be unwelcome if it was, it might even be the antidote to the next four years we’re in for, but Common also finds the time to express joy in tracks like “Love Star” with Marsha Ambrosius and “Unfamiliar” with PJ, the latter of which he compares his love to “the way we hit it, it’s like Will and Jada did it.” Well then! You go on wit’cha self Lonnie. And here I thought he was single – that s#%t sounds serious.

Karriem Riggins handles a majority of the production on “Black America Again,” and he never seems to hit the wrong note. From the hopeful and floating “The Day Women Took Over” with BJ The Chicago Kid, the multi-part tribute to his late father Pops on “Little Chicago Boy,” the trippy and chill vibes of “Red Wine” featuring Syd Tha Kid, and gospel-esque “Rain” featuring John Legend. Try as hard as I might I can only find one song on the whole album that doesn’t click for me – “Pyramids.” One out of 12 isn’t that bad. Before you critique the math I say 12 because I’m not counting the three interludes.

Common’s only enemy these days is exceeding his own expectations. He was comfortably in the groove last time out with “Nobody’s Smiling,” and if he had turned in an album of equal caliber few people would be complaining about it, but in a year of political and social upheaval in 2016 he reached deep down to make a very personal statement from beginning to end on “Black America Again” and it shows in every word he wrote. Perhaps it’s time for another road trip to Chicago to see him in concert again.