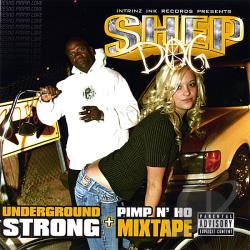 Shep Dog is a 50-year-old homeless man who was discovered by Intrinzik and Joe Dank spare-changing outside of a Circle K. Shep was an aspiring rapper, Intrinzik and Joe Dank own a label, and a beautiful friendship was born. Intrinzik evidently saw the perfect clown to exploit – one part ODB, three parts Rudy Ray Moore, and ten parts “Bum Fights.” Shep raps exactly like you’d expect a 50-year-old panhandler to rap: badly. His lyrics are limited to bragging about getting pussy, fucking your mother, being underground, and being from Fresno. Did I mention he likes pussy and fucking your mother? Because he does. A lot. It isn’t clever, it isn’t funny, and it isn’t enjoyable to listen to.  Shep may be getting paid, and obviously is a willing participant in this debacle, but the whole thing has an exploitative vibe to it.  Shep may think he’s in on the joke, but the project is designed to laugh at him, not with him.

Shep mercifully only squeezes out 8 cuts, but the disc is rounded out by 23 by-numbers gangsta rap songs by a bunch of rappers you’ve never heard of and won’t be hearing about and time soon.  This doesn’t add any potential value to the disc, unless you are into generic, bombastic synth beats and lines like “When life’s a bitch, I give it a tampon.”  There is no reason for this to exist, and even less for anyone to buy it.