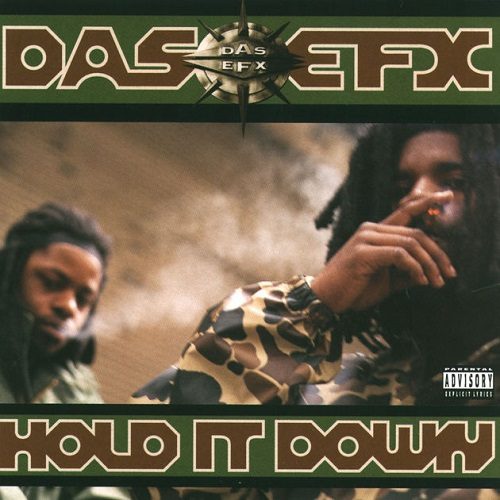 Skoob: “Aiyyo emcees is irrelevant, and delicate to the texture
But this style of mines is well defined like Webster’s
Ain’t a badder nigga raw from the jaw than the jabber-jibber
when I get +Stone+ like +Sharon+ from “Sliver”
Equppied to, riggedy rip the microphone to shreds
Dread, yo come and hit these niggaz in the head”

Drayz: “Well I connect my rhymes like Lego, so lego my Eggo
I burn you like Waco, you need more than Maaco
I take it to ya crew and keep em moving like I’m U-Haul
I’m here to school y’all figgidy f—-ts like RuPaul
I throw a screwball and strike out the emcee
and if he tempts me, I knock ’em out like Jack Dempsey
I burn some sensi then chase it with a Guinness
The illest, now hit me wit the hook because I’m finished”

In many ways “Real Hip Hop” is a representative song for mid-1990’s East coast hip-hop. The stripped down boom bap beat from DJ Premier reflects the desire to make head nodding music for the streets and the Jeeps. The obsession with what’s “real” reflects increasing skepticism about how commercially successful the rap music spectrum of hip-hop has become. The punchlines are peppered with pop culture references, some of which stand the test of time, while others make the song instantly sound dated (I was still in high school when the movie “Sliver” came out). The rampant homophobia of the era is immediately evident too. Rappers who casually used the word “f—-t” might have pretended it was synonymous for “whack,” but in hindsight the second verse of KRS-One’s “We in There” leaves little doubt about the prevailing attitude of the times. Unfortunately when you take a look back you have to take the good with the bad, but fortunately it doesn’t ruin the lead single from Das EFX’s “Hold it Down.”

In actuality it was the break up of EPMD that nearly did this album in. The dissolution of the Hit Squad forced everybody affiliated with Erick Sermon or Parrish Smith to choose sides, and despite E-Double being (A.) one hell of a funky producer and (B.) affiliated with the Squad’s biggest star Redman, Skoob (Books in reverse) and Krazy Drayz chose to side with PMD along with DJ Scratch. P still tried to claim ownership of the Hit Squad names on tracks like this album’s “Bad News,” which led to Sermon branding his own affiliates the Def Squad. This was one ugly break up and ironically “Bad News” lives up to it by being one of this album’s weakest songs – an entirely unnecessary 2:20 long affair.

The good news is that the rest of “Hold it Down” mostly fares better. It’s an unusually long album for Das EFX as their debut was under 40 minutes and the sophomore album was just over 40, but this album clocks in near the original industry maximum of 74 minutes for compact discs (improved technology since then has stretched it out further). While this does result in a few filler tracks like “No Diggety” (no relation to BlackSTREET) and “Comin’ Thru” that are just average, it also leaves plenty of room for smooth jams like Easy Mo Bee’s “Microphone Master” and bangers like the DJ Clark Kent laced “Dedicated.”

Das EFX are trying to present themselves as a more serious crew on their third album, only occasionally dropping “iggidy” flows instead of relying on them throughout tracks, leading to them self-describing their style as a “Hardcore Rap Act” on the Solid Scheme produced track. A group who professed to be “Straight Out the Sewer” on their first album didn’t need to prove how underground and grimey they are, but songs like the Mo Bee produced “40 & a Blunt” and “Alright” scream it all the same. Quiet as kept Mo Bee’s beats are underrated as is the man himself, and his contributions on “Hold it Down” shine bright.

The song that mystifies me the most is the Soul G produced “Can’t Have Nuttin’.” I have no idea who Soul G is, it’s the only song on the album he did, and the track is cool as f–k. It’s got crispy drums, a jingle bell sound that’s oddly appopriate to the the month I’m penning this review in, and some wailing soul singer samples that perfectly match the lyrics of the duos. I HEART this song – a narrative of how Das EFX hustled their way from childhood up until they met EPMD.

Drayz: “Well yo, they used to say that Dray was a motherf—in bum
cause when it came to profit son I really wasn’t gettin none
The wildest motherf—er that you ever saw
They used to call me Petey Wheatstraw, the devil’s son-in-law
Got into s–t like a fly I was buggin
From, robbin to stealin to dealin yo and even muggin
Sellin cocaine in the high school halls
Playin it slick, I kept the bombs up in some tennis balls
I used to run across the bridge with my peeps
I packed a trey-eight, in them days I was playin for keeps

As if “Hold it Down” wasn’t already a meaty album, Das EFX packed on an extra remix of “Real Hip Hop” by Pete Rock which is arguably as good or BETTER than the Primo original. This is definitely from the era when the two were the to go-to producers if you wanted your song to be a hit. The thing that holds down “Hold it Down” is just that Das EFX is trying too hard here. I can’t fault them for it because Straight up Sewaside” was a great album that got largely slept on and quickly went out of print. They were bound and determined to prove a point here, and Parrish Smith no doubt encouraged them to go as hard as possible to set the tone for HIS Hit Squad, but it’s more the length of the album than their delivery or the production that are at fault. Songs like “Knockin’ Niggaz Off” aren’t BAD per se, but it’s hard to resist the temptation to skip over it to get to a better track like “Here We Go.” That happens too often on “Hold it Down” for it to be a classic, even though it has plenty of classically mid-90’s hip-hop. If you’re nostalgic for a bygone era of rap it’s a good place to start.