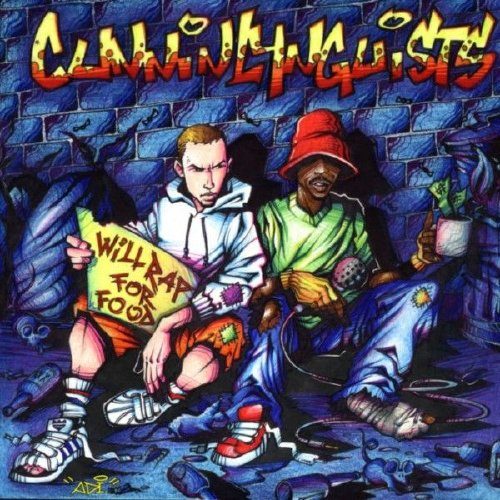 CunninLynguists :: Will Rap For Food

I love underground hip hop. Sometimes, though, I get sick of hearing these underground rappers base their entire identities on some notion of their opposition to and superiority over the mainstream. The lyric that always comes to mind is one by Aesop Rock: “Next time you wanna be a hero, try saving something other than hip hop / and maybe hip hop’ll save you from the pit stop.” Say word.

With their debut “Will Rap For Food,” CunninLynguists members Deacon and Kno crafted an album that functioned as an alternative to the norm of mainstream hip hop without dwelling on the distinction, a fact which makes this already stellar musical work that much more palatable. With the album title and scattered skits of two panhandling MCs, the CunninLynguists playfully invoke the mainstream/underground dichotomy, at one point attempting to entice a passerby by promising to spit “that jiggy shit” in exchange for some pocket change. Otherwise, though, they simply get down to business, delivering their (by now) trademarked combination of lighthearted, goofy subjects and more weighty material over Kno’s crafty beats.

Musically, Kno holds things down behind the boards for delf, aside from an assist from Celph Titled on “So Live!”, and the results are consistently sweet. In reading various articles about Kno online, the phrase that keeps coming up is “loop digger,” and for good reason, as he culls lovely loops from a variety of materials to keep your head nodding. He combines a haunting trumpet melody and hypnotic synths on “Mic Like a Memory,” scratching in a Common sample that sums up the mood exactly. On “Fukinwichu,” his minimalist bass groove and straightforward drum track are lightly accentuated by mellow vibes, as the deceptively simple beat draws you in only to direct your focus to the MCs’ joking boasts of their Shady-esque misdeeds. He has a particular knack for flipping majestic strings into funky compositions, as he does on “Lynguistics” and the instrumental “Kno’s Digging.” On numerous tracks, abundant samples of other rap lyrics capture the spirit of the songs so completely that you’d almost swear they had been constructed around those particular sound bites.

On the lyrical tip, Deacon the Villain and Kno retroactively prove a point Deacon made on a later album, 2005’s “A Piece of Strange”: “I heard â€˜em talkin bout southern folks can’t rhyme / Some of y’all must be out your goddamn minds.” They manage to incorporate punchline rhymes, introspective musings, and your more standard rap boasts without ever sounding forced, and Deacon is especially adept at the wordplay. He opens up the album with the line, “The music makes me high even though I stay away from cannabis like Wyclef,” and he rips it up with the following verse on the braggadocious “Takin’ The Loss”:

“I stay dirty like Rastafarian piss tests
Stick dick between notebook pages to show how I sex texts
Keep rappers in check like chess threats
Deacon the Lone Star, flows hotter than Tex Mex
Givin ears the best sex since 900 numbers
Rock all night like slumber
In a battle I Stone Cold Stun the mic manager
Knowin he’s amateur like minor league
Testin me’s like askin a drownin man to breathe
Better off waitin in hell for a cool breeze
Beatin me is impossible, like a tank top with sleeves
My road rages, I drop fires and pop tires
I shock liars with the truth that I share like stock buyers
Retire, and get your head right
Facin me and lovin life’s a contradiction like an Amish website
Deacon the red light, better yet the human pause button
Drop somethin that got car stereos humpin like dogs fuckin”

For his part, Kno can craft a clever verse with multisyllable rhymes and sharp metaphors, even if his overall flow and voice quality occasionally leave something to be desired. These flaws are easily overlooked, though, when he pens sixteens with the tongue in cheek wit of standout track “Thugged Out Since Cub Scouts”:

“Cuttin in the lunch line? What you thinkin, dog?
I’ll stab you dead in yo’ eye with a Lincoln Log
Oh you think I’m soft because I rock Izod?
Pull out the sawed off (“Oh my God!”)
Even though I never been hauled off to juvenile detention
I done things too vile to mention
I was too demented
Remember when baby Jessica fell in the well?
I threw her in it!
I always been a sick kid
Took hella Valiums and all type of doctor’s prescriptions
And when the den leader gave me stress
I smacked him in the grill with my merit badge vest
Nevertheless classmates learned never to test
Unless they wanted spitballs stuck to they neck
Oh you think it’s funny? I’ll beat you down
Screamin out my buddy, my buddy, my buddy
My buddy and me!”

In addition to these playful topics, they also chart out more emotional terrain, with Deacon’s confessional account of finding himself through hip hop on “Mic Like A Memory” and Kno’s painful story of abandonment by his mother on “Family Ties.”

This last point is key in a retrospective review like this one, because the mixture of juvenilia and introspection is something present in older CunninLynguists work much more so than it is currently. Personally, I believe they achieved their best balance of these two dimensions on their sophomore album, “Southerunderground,” but it receded to the background in “A Piece of Strange” and “Dirty Acres.” While these latter two albums are more developed musically than “Will Rap For Food,” whose tracks can at times blend together, their debut’s spirited banter helps it stand out from the bunch and makes it a crucial listen for any fans who missed it. With this one, the CunninLynguists proved they didn’t have to employ OR diss tired rap clichÃ©s, and instead used their mischievous sense of humor to rap their way into your pocketbook. It’s definitely worth your chump change.