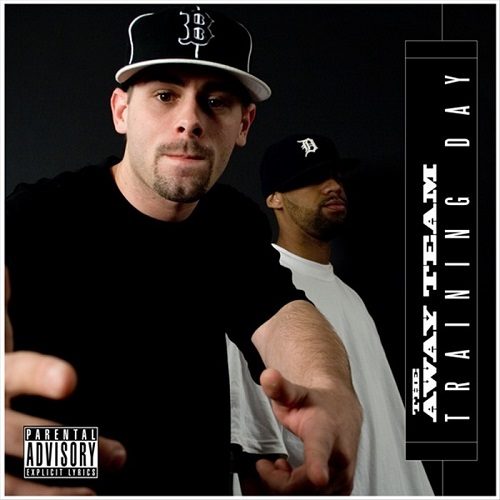 The Away Team :: Training Day

I’ve never been a fan of Little Brother. Well, technically I’ve been a fan, but not in the way most people are. I own all three Little Brother albums, but I don’t sing the group’s praises. To me the group is a bit above average, but no where near as classic as most people say they are. The main issue for me has always been 9th Wonder’s production, which I find boring and repetitive. I thought “Getback” was the best effort by the group simply because the production finally had some variety to it. So I am not too thrilled to encounter The Away Team as they play second string to little brother. Before this album, I thought of Khrysis as a second rate 9th Wonder and Sean Boog as a less lyrical and distinct Pooh or Phonte. That might be the only thing I have in common with Little Brother fans as even they consider The Away Team second rate. Their debut album, “National Anthem,” failed to cause a stir even after being value packed with two other Justus League releases including the obscure “Dream Merchant Vol. 1” by 9th Wonder. “Training Day” looks to build the group’s identity as more than just Little Brother clones.

The album kicks off with “Scream Out” which brashly declares the crew’s return:

“In case you can’t comprehend the motherfucking truth
The Away Team’s back with 100 in the proof
Let me be the first to thank y’all for coming through
Now sit back and enjoy while we hit y’all with something new
Everybody asking what’s going on with us?
Same shit, different day, take a walk with us”

From the start, it’s painfully clear that Boog is the group’s biggest weakness as his lyrics can be underwhelming. Khrysis does jock 9th Wonder’s style by doing nothing but constantly flipping soul samples, but to his credit he has a knack for injecting more energy into those type of beats than you would expect. For example, “Sum of Me” is a serious track about self reflection, but Khrysis manages to give the beat a nice soulful bounce. Boog also steps up his lyrics on the track, maybe motivated by Evidence’s guest appearance on the track. Khrysis shows his versatility on “Rockabye” where he crafts a dark, menacing beat that sounds like classic west coast production. Boog also shows a fiercer side on the mic:

“It’s over for y’all man, the credits are rolling
The movie you portrayed turned out to be stolen
Everything you say is straight out of a colon
Quick bluffing with your weak hand, its better you fold them
Since the scientific break through everybody claiming
Suburban motherfuckers on the block holding”

The west coast bounce continues on “Psycho Ward” where the duo is joined by Sean Price for an aggressive lyrical beat down. Matter of fact the only time Khrysis comes truly weak is on the generic “I’m A Fool” where he does a lazy job of flipping a sped up sample.

Overall, The Away Team did much to shed stereotypes and misconceptions about them on “Training Day.” Rather than sounding like a 9th Wonder understudy, Khrysis shows he has his own style and more versatility than his mentor. Sean Boog on the other hand still lacks the lyrical prowess of other Justus Leaguers, but makes up for it the best he can with his fierce energy. The crew still commits the same errors common to a lot of up and coming groups, mainly stale and repetitive subject matter, but their strong tracks make up for the few weak showings. For the time being, The Away Team will likely keep playing second fiddle to Little Brother, but in the future I can see them giving them competition for the title of best group from North Carolina.