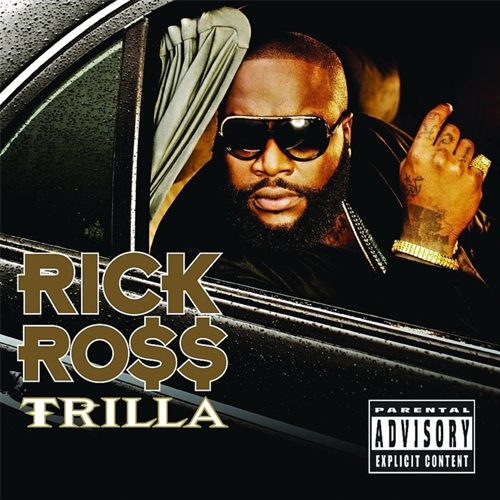 Drug trafficking begins and ends in hip-hop with Rick Ross. Sure you’ve got Joey Crack in New York, The Game out on the West Coast, but if you’re bringing that uncut raw into the U.S. you start in a city of vice like Miami. Even if all of his stories are fiction, Rick Ross is to Miami’s hip-hop drug trade what Tony Montana was to it in the movie Scarface. After making a successful start to his career in the “Port of Miami” and his subsequent “Rise to Power” it’s time for Ross the boss to push it to the limit and get “Trilla.” The only question left to ask is what will Rick Ross do with all the fucking cash? Simple – buy a really fast car and start “Speedin’.”

“Every dollar that I count can’t grow in my account
My accountant can’t count up all my money in an hour
Cause it’s comin too fast and I’m scared it won’t last
Look that white girl in her face told her this was her last dance
GOD DAMN – speed got my heart racin
See I don’t have the nominations you can blame it on my occupation
Caesar salad, Caesars Palace
You not a boss little nigga cause your cheese is average
In the Benz, A-K ridin shotgun
It’s a Benz cause your broke ’til you got one
It ain’t nuttin, do 100 in the Maybach
Throwin money out the roof, motherfuckin brake pads”

“Speedin'” has absolutely everything a hip-hop song needs these days to be a smash hit. The Runners provide the pulse racing beat, R. Kelly sings on the chorus for the heat, and Rick Ross isn’t afraid to lyrically floss and show he’s the boss. The song though does little to illustrate why Ross is respected far and above similarly oriented Southern rap peers – you could substitute Gorilla Zoe or Lil Wayne into this track and still have it be a #1 hit. In fact both artists show up on the massive “Speedin’ (Remix),” which more or less proves the point. We need to dig a little deeper into “Trilla” to find out where Ross is coming from, and it’s when he duets with Jay-Z on “Maybach Music” that we see why he can hang with the big dogs.

“57 years, yes! Blood for a D-boy
Hand my MAC-11 to the engineer to record
Got the baddest women in the world for me to feed on
Double deck yacht, docked boss, blowin weed up
Revenue incredible, it put me on a pedestal
Columbia to Mexico, I figure there was a better rule
Look at me a model now, models and bottles ’round
A Blood holla “BALLIN,” but the boys in blue they shot him down
Gang-affiliated, colors prosecutors painted
Cause the niggaz I employed name synonymous with mayo
Instrumentals that are mental, Maybach kind of mental
400 off the lot, on the block it’s monumental
Some things, your money can’t buy
Like Heaven in the sky, or even a better ride
In the rear, so many instruments I hear
Tucked behind curtain, no signs to fear (ROSS!)
I’m higher than a leer, this Maybach music
Designer shit I wear, may cause you to lose it”

There are two completely different levels to Rick Ross’ game. On one hand he’s extravagant and proud, brash and boisterous, entirely willing to celebrate to excess enjoying the fruits of his success. On the other hand he’s completely grounded in reality, noting that cops lurk around every corner waiting to take you down, and that even being fabulously wealthy can’t buy you a ticket to the pearly gates. These days there are very few gangster rappers can articulate the duality of man in their raps, and for my money Rick Ross does it far better than most. It doesn’t hurt that he’s got J.U.S.T.I.C.E. League supplying the beat though – Jigga finds as much inspiration over their track as Ross does.

Fresh guests and fire beats aren’t in short supply on “Trilla.” T-Pain hooks up with Ross on the Jonathan ‘J.R.’ Rotem produced track “The Boss,” sure to be another Ross hit if they can censor enough of the curse words. New flavor of the month Trey Songz appears on “This Is the Life,” while the old familiar flavor of Nelly is found on “Here I Am” – produced by Elvis and Drumma Boy respectively. It’s posse-all-in on the J-League laced “Luxury Tax,” as Ross is joined by a who’s who superteam of Lil Wayne, Trick Daddy and Young Jeezy. Even when there are no guest stars evident on the vocals they’re clearly evident on the beats, as you’ll recognize the signature Atlanta sound of DJ Toomp on the song “This Me” right away.

Now to be perfectly honest I don’t want to cut Ross a blank check that could be seen as an endorsement of getting rich via illegal pharmaceutical activities. There are too many rappers talking drugs on wax as it is, and heaven only knows how many of them ever actually pushed big time weight – if they did they’re lucky to not be doing a bid right now. Ross’ guest star Jay-Z may have once compared the rap game to the crack game, but the reality is that the hustle and muscle of moving units of music won’t land you 25 years in a federal penitentiary (except perhaps for mixtapes). There’s a reason Ross has his hustle on wax and not on the streets and listeners shouldn’t presume they could live the Tony Montana lifestyle Ross does on “Trilla” by selling drugs too; or they should at least remember that Montana only lived that life for so long in the movie before violently being gunned down. I suspect as Ross continues to evolve as a lyricist there will be even more of a message in his music, but in the meantime the production and guest stars on “Trilla” make for an effective album that shows Ross has yet to tap into his full potential.