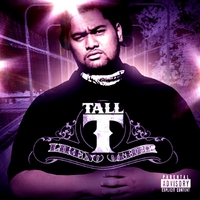 While most eighteen year olds have their minds on unimportant things in life, Tall T has his focus on the very thing that has helped him aspire: music.  At such a young age, Tall T has managed to become both an accomplished artist and producer as he attempts to compete with the incessant talents coming out of the West Coast.  With a great deal of preparation and valor in order to show what he is capable of in the do or die world of hip hop, Tall T releases his debut album “Like No Other” under Scotty Gil Music.

Although growing up in Southern California was not the most tranquil place to survive for Tall T, he managed to push aside the obstacles he once faced and decided to live a more humble world through music.  In an attempt to escape the realities of ongoing violence and devastation in the Southern California streets where he lived, not wanting to follow the same path that many others chose in drugs and gangs, Tall T found his niche in the arts.  Yearning for a way to avoid the pressures of his peers, Tall T quickly learned of his passion for poetry, art, and eventually music.  Gaining respect from both his teachers and cohorts for his creativity and talents, Tall T began to grow as both an artist and a person, finally realizing his strengths in hip hop music.

With the flourishing musical talents in his family and with the guidance of his older brother, Young Saf who also produced, Tall T had a strong outlet to turn to in terms of creating genuine hip hop music.  As Tall T’s music became more recognized in Southern California because of his distinct style and flair, he and Young Saf were approached by Scotty Gil of Scotty Gil Music to create an album.  After six months of perseverance through a continuous uphill struggle, “Like No Other” was finally complete as it represented the commencement of the debut of Tall T’s artistry.  .

In his debut album, Tall T shows us how he is “like no other.” With a twist on a Caribbean style beat in the title track, Tall T shows how he shines above the rest. He boasts that “I got a swag like no other, put in work like no other, get her done like no other.” In “What I’m From,” Tall T brings it all back to the beginning while considering the difficulties of facing adversity during the time leading up until now. Soft chimes begin the track as the hard bass is slowly introduced. Tall T shows the great efforts needed in order to make money and how uncomplicated it is to get involved with gangs. He recognizes the importance of family and how the constant support has helped him in his music as he says:

“To the Top” is yet another track that shows Tall T’s determination to reach the highest level of self-achievement as his lyricism shows how he is strong-minded in reaching his goals regardless of the obstacles in his way.

Representing the West Coast, Tall T shows his love for Cali in “Bounce, Rock, Roll, & Skate.” As you hear Tall T drinking a cold drink in the intro for the track, a hard bass initiates his lyricism as he praises the “Golden State.” Not only does he represent what and where he’s from, he also includes the track “Uso Lean” in “Like No Other” to acknowledge his Polynesian heritage and better yet, also raps in his native tongue.

Like many rappers, Tall T also uses his lyrics to make the ladies swoon. With a beat reminiscent to the Bay Area’s hyphy beats, “I’m Down Wit’ That” shows that Tall T is plain and simply down for whatever comes his way with a lady. The booty shaking club track of “Break a Sweat” tells you to do exactly that. With his humorous, yet descriptive lyrics, Tall T neglects to sugarcoat what really goes on at the club as he says, “You got sweat on my pants from all that sweat on your booty.” Tall T unleashes his singing skills in “Ghetto Love Song” and surprisingly succeeds in doing so with his lyrics replicating Zapp & Roger’s “Computer Love.”

Unfortunately, with the abundance of “swoon songs” in “Like No Other,” Tall T could have done without “Basics (More Than Friends)” as he takes you back to the basics of winning your lady over. Tall T’s simplistic rhymes and rather juvenile content rarely made sense in the track. With rhymes such as, “I’m postin’ like a mailbox, getting under your skin like straight up chickenpox,” Tall T should go back to the pen and paper on this one.

Having turned negative energy of violence into something positive such as music, Tall T is definitely “like no other.” With the release of his debut album, Tall T is an artist to be recognized from the West Coast with his rhyming skills and as we have seen, his singing skills as well. As his deep-rooted family life and culture are clearly exemplified in his lyricism, Tall T has proven that the driving force of musical artistry is like no other, defying even the fiercest situations. With his latest accomplishment of being on the upcoming mixtape “We Da Peoples Champ Vol.5” hosted by Status Quo and Yung Steve, it will feature the latest talents from across the country including Tall T’s “Uso Lean” and “Like No Other.” With the mixtape and his debut, this is just the beginning for Tall T to represent the West Coast in its entirety.