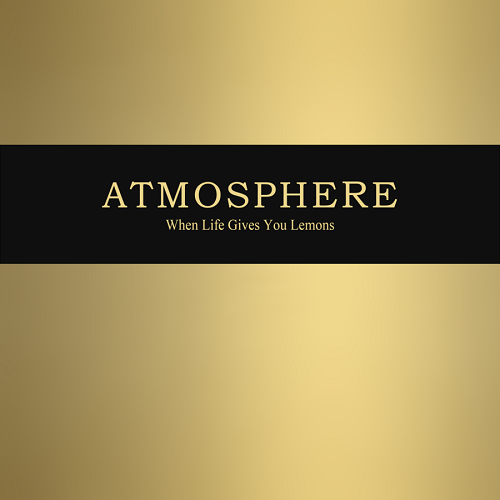 Atmosphere :: When Life Gives You Lemons You Paint That Shit Gold

During my tender years as a newly-reborn Hip-Hop head in high school, I tended to lean more towards the hardcore shit. The Guilty Simpson, Sean Price, Wu-Tang Clan-type joints that’ll make ya feel like jumping somebody take up the majority of my iPod. So that pretty much meant that groups like Atmosphere usually take up space on the digital backburner instead.

However, after gaining some much needed perspective (and getting heartbroken, etc., etc.) I began to understand why folks were into the poorly-labeled “emo rap” that emcee Slug and producer Ant were creating in their Twin Cities habitat. It has soul in places that a lot of the hardcore shit doesn’t while still maintaining the gritty (albeit different) “keep it real” concepts that are so evident on M.O.P. albums. Thus, that is why Atmosphere appeals to me – especially this new joint.

Now, when I heard that they were packaging their new album, “When Life Gives You Lemons, You Paint That Shit Gold,” with a DVD and as a children’s storybook, I set aside my twenty bucks then and there. Seeing as how I’m really just a six-foot-seven five-year-old, I got mad hyped about that shit. And I was not disappointed at all. This is, in my humble opinion, Atmosphere’s best work.

Gone are the chipmunk soul samples that Ant’s been employing on Brother Ali’s previous two CDs and Atmosphere’s last album, the solid 2005 effort “You Can’t Imagine How Much Fun We’re Having.” Instead, they’re replaced by live instrumentation that swings from beautiful minimalist compositions (“Like the Rest of Us” and “Yesterday”) to big, speaker-filling funk jams (“Wild Wild Horses” and “You”). Tom Waits even stops in to provide a beatbox on “The Waitress.” It makes for really entertaining music, and I made it through two complete turns of this album before I could fully pick out my favorite joints.

However, as usual, the beats are just canvases for Sean Daley to paint some beautiful murals on. This album might as well be called The Great Adventures of Slug, as homeboy channels his inner Slick Rick like never before. Whereas most of the lyrics he’s written before have been very apt at describing his personal experiences, now the songs are mostly third-person narratives – and they ain’t half-bad, either. He tackles cliché topic matter like unwanted pregnancies (“Dreamer”) and substance abuse (“Shoulda Known”) with fresh perspective, and the metaphors are crazy, as well. What sounds like a rehashed storyline of strife between pimp and ho turns into Slug’s struggle with cigarette addiction on “The Skinny,” and the blues guitar-backed “Guarantees” is a blue-collar anthem that swings from song to sixteen with ease.

The album’s gem is its finale, “In Her Music Box,” where Slug tells the story of a little girl being raised by the gangsta raps that blare from her father’s car speakers:

“She had a bad dream in the back seat
The same one as yesterday, the same one as last week
Surrounded by her favorite favorites
Elmo, Barbie, her purple baby blanket
And that little Matchbox, it looks just like Dad’s car
It’s fast on the leather, pretends it’s NASCAR
It jumps over Elmo, cause it can fly that far
With Daddy in the front seat, frontin’ like a rap star
He knows the words to everything on the radio playlist
He fakes the accent, even makes all the faces
And when he raises his voice, it makes her feel like he’s famous”

Slug somehow manages to tell stories with such vivid description that you can almost feel the bass pumping out of an Alpine system, riding shotgun with the little girl sleeping in the back seat. It’s a crazy tale, and Sean manages to tell it perfectly. Even though some might miss Slug’s angst-ridden diatribes (Lucy Ford is nowhere to be found on this album), he manages to toe the line between rapper and griot better than he ever has before on this new effort. Atmosphere keeps getting better and better, and it won’t be long before they start bumping that OG shit off of my iPod completely.