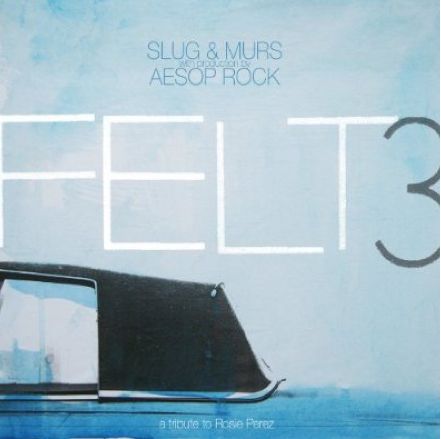 “Everything you love about rap in one disc
These internet rappers just beef over dumb shit
We all about the cash, we all about the women
Whattup though? You know we can’t forget ’em
But don’t you think we soft for one minute
We can still break your whole crew off with one sentence
Who made you want to rap, and be independent?
It’s Felt motherfuckers, if you want it come and get it!
Who’s this? If the new shoe fits, I’ll take two kicks
Truth is, without new hits, we all useless”

2009 has been the year for new rap supercombos to take the industry by storm, from regional teams like KRS-One & Buckshot to nationwide collaborations like Slaughterhouse. All of these groups have awakened a slumbering hip-hop fanbase, but when one examines the recent history of 21st century rap Felt pre-dated the trend and may have set the example for all to come. Few people would have imagined the dope results to emerge when Minnesota and California collided, but two successful albums later MURS has vowed that his Northern compatriot Slug is the rapper he likes working with the most. It ain’t hard to tell when you listen to their previous collaborations – Slug & MURS bounce raps off each other like an underground Run-D.M.C. They alternate bars and verses, finish each other’s punchlines, and construct complex songs like one body with two heads – different personalities that still work together towards a common goal.

Previous Felt albums have been loosely constructed around themes of fly ass females from Christina Ricci to Lisa Bonet, and the third installment continues that tradition by giving props to Rosie Perez – they even throw a sticker of her inside the cover sporting her trademark hoop earrings. Other than that I can’t say songs like “Revisiting the Styleetron” have anything to do with her – that’s more of a tribute to seminal Digital Underground affiliated group Raw Fusion. I also can’t recall any movies that Rosie Perez did with “Kevin Spacey,” though there’s a song named after him on this CD. Undoubtedly someone will track down the connection after this review is published, but previous Felt albums have had songs that don’t address their ostensible subjects either, so this isn’t an unprecedented move. What IS unprecedented is that these two highly talented and pugilistic lyricists have turned over the production of “Felt 3” to Aesop Rock, equally acclaimed as a poet but often slept on as a musical maestro.

The songs of “Felt 3” turn out to be just as much of a treat for the beats as the rhymes, or as noted on “Revisiting the Styleetron” this album is an example of “how to rip it, how to rock it when the beat pounds” – except Rock is crafty enough to know when a beat doesn’t need to. “G.I. Josephine” is a headnodder with a story about a fly mami/mommy makin’ her own way through the world like a soldier, and Rock pulls back on the music to let Slug and Murs tell their story without the beat getting in the way. “Glory Burning” on the other hand amps up the bass and the ambient noise for a harrowing tale of escape for a boy who grew up “from the childhood playground jungle gym to the concrete jungle that he’s stuck within.” While some songs like “Bass For Your Truck” live up to their title and sound better the more you crank it, others like “Paul Reubens” seem heavy but actually improve if you decrease the decibels and peel back the onion Aesop Rock produced. While MURS declares them “the only motherfuckers in this game who ain’t corny” lyrically, it’s just as much a credit to the melodic bass, screeching but not irritating backdrop, stuttering drumbeat and haunting vocals that weave in and out of the elements that keep it interesting. The song is electronic without being synthetic, showing that a new era of production is within reach for those ready to evolve.

It’s easy to heap praise needlessly on an album I enjoyed this thoroughly, but as I look back to the last installment of the Felt duo I can’t help but be struck by the words I wrote then: “Sometimes the songs are that easy to relate to, others could take you days to figure out. Whether they’re profound or hardcore, you’ll enjoy the trip and the search.” God damnit, Slug & MURS have done it again, and Aesop Rock did the impossible by actually taking an already good thing and making it even BETTER. Perhaps in the end I’m not needlessly heaping on the praise, because albums that are not only fun to listen to but can make a difference for the future of hip-hop are few and far between. While individually Slug & MURS are often pigeonholed as underground “backpacker” rappers who don’t create music for the masses, “Felt 3” is a work of art that unlike so many sequels in life exceeds what the originals had to offer, and indeed offers something everyone can appreciate. If you try to label what they’ve done as underground and dismiss it, that’s your loss, not theirs. This album will change what music is and can be – not just hip-hop – music as a whole.