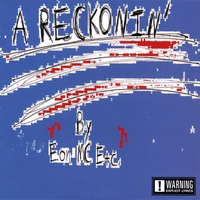 Eon MC Etc. has an unwieldy name and an album to match. For a guy who simultaneously lectures women on the importance of feminism and then defends George Bush’s war policies as more humane than abortion, that’s probably more of a compliment than a diss, though.

“A Reckonin'” is a tough album to get a handle on. Eon does a little bit of everything on here (hence the name), including rapping, singing, producing, and spoken word poetry. As a rapper, he is pretty solid, with a deep voice and smooth flow combined with intricate rhyme schemes and good wordplay. His poetry is elegant as well, and it is delivered fluently. In his other guises, however, Eon is less than stellar. He is a competent singer, but his melodies are often forgettable at best or awkward at worst (as on the ungainly “Know You”), and his song-writing in general takes a turn for the worse when he starts singing.

His rapping, on the other hand, is well crafted and tightly packaged. He successfully flips a double-time flow on “True Or Die,” slows it down on “So What,” and demonstrates exceptional breath control on “Lights Camera Action.” He also has a talent for writing clever hooks that are neither corny nor repetitive, as on “Bring the Heat,” where he rhymes:

“It’s deadly on my level
Son, if you ain’t the devil
You ain’t bad enough to square off in the ring with me
Hey, I dare you
No, I double dare you
Nothing can prepare for the way I bring the heat
[…]
Enter the mind of a mad rapper, haphazard, black bastard
Attack faster than Ras Kass with whack stabs
Get your face slapped ass-backwards, kinda twisted
I know there was a point to my life but I kinda missed it
From that O mayne, feel no pain, crazy but so sane
Flow strange and blow brains, spittin lyrical cocaine
Roll both lanes, never timid when it’s time to throw things
Trust and believe this, you ain’t tryna see me from close range”

While his technical ability is never in question, his subject matter is often as limited as the mainstream MCs he spends so much time criticizing. There are a couple of tracks about his tough upbringing and current economic hardships, but for the most part he sticks to a few main topics: his own skills, lame commercial rappers, and Biblical fire and brimstone. The “reckonin'” in question here is the Christian day of judgment, and he makes it very clear throughout who he believes is on the right and wrong sides of God’s wrath.

This leads to some interesting diatribes that are somehow both very typical and completely left field on a hip hop release, which I guess isn’t surprising since on the first song he declares, “I’ma kill hip hop, she don’t deserve to live.” He decries the Justice System (“We should just dismiss â€˜em”), Democrats (“Who took away your 40 acres and a mule and replaced them with a welfare system that perpetuates poverty”), black supremacy (“Did we go through civil rights just to become black supremacists?”), and homosexuality. Especially homosexuality. It’s not particularly surprising to find rabid homophobia on a rap song, but somehow I’m more used to the generic and circuitous “faggot” references than logical deductions of homosexuality’s wrongness. On a particularly furious verse of “Kingdom Come,” he laments that “a homosexual’s more acceptable than a virgin” and declares that “we oughta be the United States of Sodomy” for our tolerance of gays. He even goes so far as to assert that “in every major belief system this act is forbidden,” a statement of dubious anthropological validity. It’s difficult to find too much fault here after giving artists like Snoop and 50 a pass for their flippant misogyny and ambiguous morality, but it still sometimes feels like a bad segment on Fox News.

At the very least, Eon’s lyrics draw your attention and keep you listening. The same cannot be said of his beats, which aren’t bad so much as they are boring. The album appears to have been primarily self-produced, and if that’s true, Eon might want to consider delegating some of the musical responsibilities next time around. The production is generally unremarkable and very minimalist, often consisting of a few isolated notes and a tepid bass line. Very few tracks stand out for their beats, an exception being the frenetic strings of “Chip On My Shoulder.”

“A Reckonin'” is ultimately a disappointing album because of the promise displayed by its lyrics. Eon MC Etc. is blessed with a good voice, an effortless flow, and dexterous wordplay, even if he is not exactly animated in his delivery. His beats, however, are less inspired and hold the album back. Throughout “A Reckonin’,” Eon proves himself to be a darn good MC. Unfortunately, I can’t equally recommend the etc.