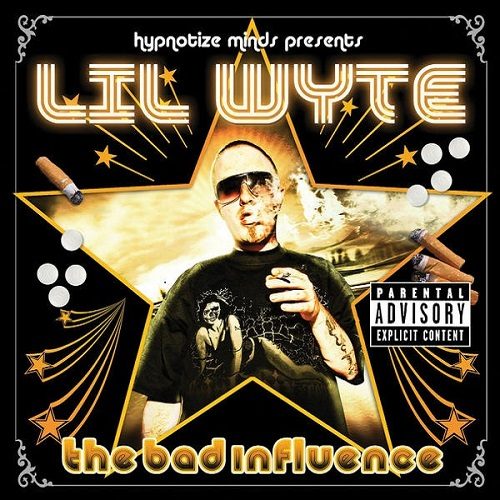 If this is your first exposure to Patrick Lanshaw a/k/a Lil Wyte, I’ve got good news for you – he’s a fully vested member of the Hypnotize Minds family and his entire album is produced by DJ Paul and Juicy J. Lanshaw is by his own admission their token white boy. He makes no apology for it, and goes out of his way to state in his bio and during interviews that Paul brought him into the fold because he was the hardest white rapper in all of Shelby County, repping the Frayser section of North Memphis to the fullest. If you know anything about the poverty and economic depression of that region, it’s not hard to imagine ANYBODY being hard in that environment, regardless of their race. It’s a survival mechanism. You go hard or not at all, because if you don’t go hard you wind up in even more dire straights than you’re already in. Even in 2009, most white rappers other than Eminem get their credibility challenged at some point, but Wyte has nothing to worry about. His background is legit and his affiliation with Three 6 backs it up.

“I got a master plan, in the works, pick investors with the perks
When I make ten million I’m gon’ turn into a fuckin jerk
If you liked the old me, too bad, I’m ’bout to kill him off
Then go overseas and make a hundred mill’ with David Hasselhoff
And I make the Baywatch to show ’em what they have created
Gettin money that don’t look like ours is how you know you’ve made it
When I reach I touch the fuckin sky, every time hoe
The shit I teach is deep in more than just a fuckin rhyme hoe
I am the bad influence, the one that’s tellin you do it
Like your conscience, only I got way more pain relievin fluid
I’m a little fuckin dro’d, I’m a lot fuckin throwed
And I like my fans to join along whenever I’m rockin out they shows”

Here’s the perplexing thing about Mr. Lanshaw – with such legitimate hard-ass credentials he shouldn’t feel the need to prove he’s “The Bad Influence” with every single song and album. In eight years of major label releases though, Lil Wyte has been relentlessly thugging to a degree even Three 6 Mafia has to be impessed by. 2007’s “The One and Only” was the latest in a long string of successful and slightly monotonous albums from Wyte. I like to compare Wyte’s rap style to frosting – it’s all you see when you look and it’s the first thing you’re going to taste when you hear him. Underneath that frosting though is a moist layer of DJ Paul and Juicy J production that provides the actual body of his music. If he didn’t have that cake, he wouldn’t be making that guap. If you put frosting on a turd, it’s not cake – it’s a frosted turd. Thankfully Three 6 continues to bake up that goodness for Wyte on “The Bad Influence.” On the title track above, it’s their hard bassline and literally hypnotic melody that makes the song work. It enables you to ignore the contradictions of his rhyme unless you’re paying really close attention to what he has to say.

Unfortunately I’m the kind of person that pays attention. Despite the fact Lanshaw dropped out of high school three times before getting his diploma, he’s not a dumb rapper. In fact his “Baywatch” reference is a fairly clever double entendre given his neighborhood is sometimes called the “Bay Area” of Memphis by locals. He’s also alluding to doing something more rappers and entertainers of all genres should do – investing his money for the future so he can live comfortably later on. That should actually make him a GOOD influence, but every time Lil Wyte says something you could build on, he has to prove he’s still the hardest white boy in Memphis and put over just how violent, misogynistic, mean and fucked up he is. Take “One Little Pill” for example:

“I just popped tabs of Xanax hoe
11 o’clock in the mornin, I’m ready to go
Just bought me some ‘dro, threw on some clothes and stepped out the do’
I did my time hoe, full speed to the liquor sto’
And if you wit me, you gon’ have to hit the weed too
Pop these, drink this, and really get with me too
See I hate, bein the only one at the party fallin down
That’s why I try to get yo’ ass fucked up as I am and on the ground”

Wyte can’t make up his mind what kind of influence he is on this song for more than five seconds. At one turn he’ll claim he’s the reason that your kids won’t make it into college, then he’ll turn right around and say that it’s the parents fault because they leave full medicine cabinets full of drugs unlocked. Okay Lanshaw, which way do you really want it? His own intelligence betrays him – he’s smart enough to know how stupid the shit he says is. While Marshall Mathers is clever enough to turn this into a macabre self-deprecating comedy, convincing listeners that his alter-ego Eminem is a cartoon caricature of bad behavior, Lanshaw seems almost desperate to convince us that he really does “get high and drink beer with all (his) rowdy-ass friends” daily – even friends he admits are only “So Called Homies”:

“I’ve lost so many so-called homies, but that’s okay
Since they gone, I’ve realized they weren’t my homies anyway
Cause if they was, it would be cool and everything would be straight
But see they ain’t, that’s why I had to write this song about the fake
It all started, in 2001 when I was signed
to Hypnotize Minds, now I got a motherfuckin line around my house
Everybody came to hang with Lil Wyte
I always had a lot of friends, but these were not your average types
It’d be a Tuesday, there’d be 16 people in my living room
And everybody had a blunt that we all would be feelin soon
A few of ’em lost they jobs cause they couldn’t pass a piss test
The others just got fired for trying to hang with me all day I guess
I work my ass off, once a year, and get checks every three months
I ain’t always had cheese, shit I used to be on free lunch
And now we’re in a recession and shit, all my homies countin change
They askin me for money and if I ain’t got it they all start lookin strange”

While the contradictions are certainly fascinating for a period of time, especially when backed by the crunk kind of Memphis beats only DJ Paul and Juicy J can provide, it starts to wear on you over time to the point you realize it ain’t all sweet. There’s something beneath the surface of the hard as fuck image that Patrick Lanshaw portrays, but he’s seemingly afraid to shed his hard exterior. Even though he’s been so successful for so long it’s not really necessary to prove he’s the crunkest white rapper in Memphis any more, Lil Wyte has a rep to maintain, so he’ll continue to sell to the death that he’s the meanest, drunkest, rowdiest, nastiest white boy rap’s ever seen. Maybe he is, but I think there’s more to Lil Wyte than meets the eye, and the cake would still taste good if he could be convinced to show us a different flavor. He’s vanilla on chocolate, and it’s okay for a while, but a little more variety would go a long way to making his music more palatable.