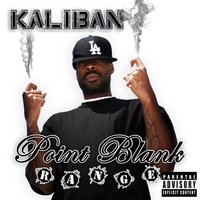 The California rap scene is one that has been begging to re-emerge with some convincing young talent. It seems that the only releases that universally draw attention from this region anymore are from the tired but true veterans of the game. Surely album sales are a major drive for record labels and sometimes that interest coincides with a region; the perception that a certain area is the grounds for hip-hop at the current timeframe. However, rest assured that even though the focus may be elsewhere, there is always some young, hungry emcee trying to gain deserved recognition when you are not paying attention. Kaliban is the new kid from South Central Los Angeles, who hopes to draw the attention of the masses one quiet release at a time.

Kal’s story is a typical one when it comes to rap music, as he too grew up in a gang-ridden neighborhood. Amidst the violence and corruption, he took his mic and rap skills to the local scene, coming up through the freestyle battle circuits. He further progressed to more mainstream plateaus like the Nike Battleground Competition, where he took home a trophy. The most notable difference between Kaliban and standard fare is his apparent humble nature–he is often shrouded in shadows, with his eyes covered by a straight-billed Los Angeles Dodgers fitted. It is a bit of a relief to see an emcee that does not need a gangsta grill and an icy adornment hanging around his neck to sell himself. A fair comparison that can be determined from the new disc “Point Blank Range,” is that Kaliban is similar to fellow West coaster Crooked I, or perhaps a silky mixture of the Cali Agents members (Planet Asia and Rasco).

The album starts with a track of frenetic energy and a flurry of hardcore lyricism on “Roulette.” The track not-surprisingly relates Russian roulette with the street life. The Antidote produced cut is a great introduction for a relatively unknown rapper, given that Kal shows off his song writing chops with a catchy hook:

It’s just a friendly game of Russian roulette
Pistols on a plane, ballin’ on a jet
Fools want to hate me, ain’t seen me yet
But skip them dudes, I’m on my cash quest”

It is pretty standard gun-toting gangster fare, but the important thing is that Kaliban spits it with a certain believable conviction. And for the most part, the featured artist does not stray from the formula.

One exception of the rule is the following track, “Bend Over,” which is Kal’s self-described “party and bullshit” anthem that would find a fitting home in the environment of a dingy strip club. The synthy track is a dead ringer for a Lil’ Jon production and is almost a necessary diversion for the average rap listener these days. For what it is, the ass-shaking romp is fairly catchy and the most likely of radio singles of the material found on “Point Blank Range”.

“World of Fantasy” is perhaps the most emotive track on the entire EP. It is an autobiographical piece about the Kaliban’s efforts in making it as a rap star, confessing the goal to be just a dream when he first started his rapping ways. The song runs at about 5 minutes before it tapers off into an interlude, but it certainly shows that Kaliban can carry full-fledged tracks on his very own, which is a weakness of a lot of mix tape joints you may hear from up and comers. Again, the beat selection is well done as Kal spits venomously over some 80’s rock sounding samples and a soaring vocal sample which bridges into the hook, creating another winner.

There are occasional missteps on the disc, as is the case with many releases, especially from less established artists that do not have a huge budget production team. “Paper Cut” is the most notable, as it unfolds as a lazier effort from the snare drum beat to Kal’s flow, which is much slower than his norm. Still, the song has its own part in the ongoing conceptual storyline of the disc, which is a selective interview with the artist and different aspects of his life–a perfect idea for someone trying to distinguish oneself from an overcrowded marketplace of amateurish rappers.

“Point Blank Range” further proves that it has a little something for most any rap fans as Kal delves into the nostalgic by re-working “Brooklyn’s Finest,” Jay-Z’s classic from “Reasonable Doubt.” Some may say that artists doing this are committing sacrilege, but Kaliban does a very respectable job in molding this into his own image. “LA’s Finest” still shares the spirit and enjoyable nature of its source material.

Kaliban has felt his share of industry woes, hence his controversial namesake. He began his career under the moniker 50 Cal, quite close to the Dipset cohort 40 Cal’s rap name. He chose to make the change to reflect his opinion of himself as an “industry terrorist,” to get his point across and to represent his kill or be killed mentality. Whether you agree with his tactics or not, Kaliban is a force to be reckoned with and the industry should certainly start looking his way for a fresh face that can make an impact on the genre (and possibly SoundScan).

If you want to hear a talented rap artist that is giving it his all to carve a niche in the rap scene, with countless mixtapes gathering him buzz, then look no further than this man. You can check out his music on Killiban.com, or Myspace.com/KalibanMC, because such an artist deserves to be recognized. The “Point Blank Range” EP unveils an artist more rounded than his proper releases should account for, complete with a running concept throughout the disc. Kaliban, the new guy from South Central comes correct.