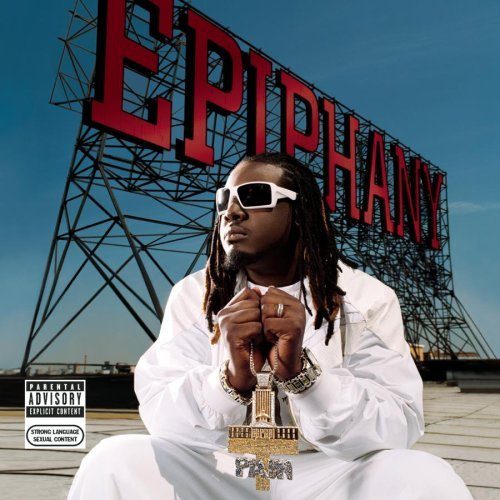 Sometimes we are caught in between what we want to do, and what others think is best. Frequently, they are right. For example, I recently had to physically push my (never otherwise) shy friend in the direction of a good-looking girl that had been checking him out. He protested, he resisted – but my superior height and weight advantage enabled me to shove him far enough. They started talking and hit it off – thus, justifying my shameless actions. T-Pain recently admitted that he finished his sophomore album, presented it to his record company, and they “requested” a finger-snapping first single. So he went away, probably in a huff, and subsequently made “Buy You A Drank” – which turned out to be a mega-single. They were right to push him just that bit further. Sometimes we all need a push.

You see, “Epiphany” went to the top of the Billboard charts, even beating Rihanna’s slow-burning gigantosaurus “Good Girl Gone Bad.” It hasn’t sold a truly stellar amount, considering how prolific a guest artist he has since become – perhaps we have here an artist that values making a consistent album from start to finish rather than an average one with one hot single. The album certainly makes good on the promise his pretty solid debut, and it is to the credit of “Epiphany” that if you weren’t aware of the singles, “Buy You A Drank” would have blended in quite seamlessly with the rest of the tracks on here. That isn’t to say that there lies a stack of massive hits on here, but it displays a genuinely creative artist/producer that is entering “the zone.” On the old “NBA Jam” when a player was on such a hot streak that he was “on fire,” this is T-Pain lining up the shot that sets him alight.

To be perfectly honest, his rapping isn’t the best – lyrically he is perfectly competent, and has improved since his debut, but he simply doesn’t have a natural voice for it. That might sound harsh, but it is fair. His half-singing/half-rapping is much more effective, whilst his Auto-Tuned (not Vocoder, slap on the wrist for me) voice does grow charming. The production he lays down is certainly solid and consistent throughout. Whilst not really being worth much of an intense listen, it is perfect background music – and doesn’t really flag at any point, other than his quite ridiculous ode to stomachs on “Yo Stomach.” As for subject matter, diversity is the name of the game – whether it be the good times (“Buy You A Drank”), the bad times (HIV story “Suicide”), the sexy times (“Back Seat” – no explanation necessary) or clever concepts (the excellent almost Bowie-esque “Time Machine”), they all do the job effectively enough.

Perhaps the only thing that really (retrospectively) hurts this album is T-Pain’s success as a featured guest – within the last year, he really has locked the guest hook game down and made it his own. Part of me wishes that he had kept some of those songs for himself – it is scary to imagine that “Epiphany” or his next LP could have contained: Flo Rida’s “Low.” Or Chris Brown’s “Kiss Kiss.” Or Kanye West’s “Good Life.” Or Plies’ “Shawty.” Or Fabolous’ “Baby Don’t Go.” With that selection added to his second album, it would have undoubtedly launched and cemented him as a true international superstar. Plus he would’ve sold gazillions.

But that is merely the idol conjecture of a fan/critic – he produces a solid album, and sets himself up nicely for a massive third LP, which, judging by current form, should be the one that makes him as big as his boss, Akon. What I really admire about T-Pain is that he does it, for the most part, himself – at no point do you think that he needs the guests on there (who could out-guest him anyway?). He produces, sings, raps… He probably staples the liner notes too. And that is an admirable trait for one SO young (22) already on his second full-length. Whilst this album doesn’t necessarily indicate it, call it a hunch or a simple old-fashioned gut feeling, but I think that T-Pain could end up being a hugely significant artist in the next decade – if he continues he present upwards trajectory. Think a modern day Stevie Wonder without the natural singing ability – he could be that in a couple of decades time. No, I haven’t been sniffing glue – it is a hunch. Care to bet against me?