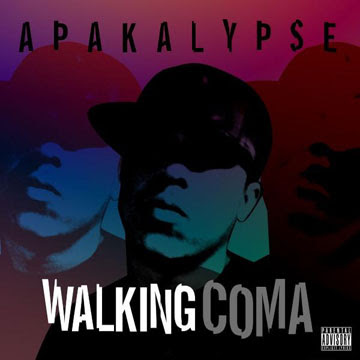 Miami is known for a lot of things, but hardcore rap isn’t one of them. Even after shaking the shadow of booty and bass music, current Miami artists still make their dough off of booming dance anthems. Apakalypse breaks the mold when it comes to Miami artists as “Walking Coma” doesn’t have anything resembling dance music on it. What we get instead is hardcore battle raps over grimy rap beats. It’s a formula that has worked well for acts like Jedi Mind Tricks and Apathy, though it can be hit or miss. Though it is unlikely Apakalypse will get much a following locally, there is a big audience out there that enjoys the darkness and rawness of hardcore rap. The big question mark when it comes to any hardcore battle rapper is whether that can sound dope over the course of a whole album. With “Walking Coma,” Apakalypse shows us plenty of potential, but still has a long way to go before he’ll be considered among the underground elite.

“The general, bare-handed with no weapons
Amongst serial killers and all types of real gangsta ass niggas
That won’t hesitate to bury a clown, Six feet deep, under the ground
I stay down like four flat tires, trust me man, the word spreads around like wires
That’s why I stay changing my digits, never simplistic linguistics
Switch up cannibalistic ancient mystics
Of the eons, come harder sniffing Freon
Travel all through hell into heaven, to the vastness
Of outerspace, just to punch you in the motherfucking face”

“Doomzday” also hints at a message or a theme, but Apakalypse’s rhymes are more of the same mixture of hardcore imagery and battle raps:

“Apakalypse secret order, wisdom of the sages
Knowledge of the gods, kept secrets for ages
Spiritual wages dealt, from the aspect of different phases
As the axis tilts, in the eyes of lies and crazy guilt
Creation of new diseases, as the Vatican has you waiting for Jesus
Total control through mind control, the price is your soul
As you corny emcees rap about ice
I bomb you devils before I return to paradise”

Apakalypse’s inability to construct structured and focused songs is the biggest drawback to an otherwise solid album. The problem is that this is a pretty big drawback unless you’re a huge fan of this style of rap music. The only songs that come close to having a cohesive theme are “Who Is That Dude?” and “Master Manipulator” and that’s just because the focus of those songs is on how bad and crazy Apakalypse is. The lack of focus hits almost every battle rapper when they make the transition to song writing, but it really hurts “Walking Coma” as it’s almost impossible to tell the difference between any of the songs outside of the beats.

Apakalypse definitely has a future in the underground rap game if he can refine his style. While the potential is there, Apakalypse sounds very raw and unrefined on most of the album. His battle raps are great in small doses, but wear thin on the ears for a full album. His flow is energetic and urgent, but can be rushed and awkward at times. The production provided by the duo of EDK and Jack Horner complements his style perfectly as it is a mix of old school boom bap and new school static and distortion. The music is both dark and soulful. As it stands it’d be hard to give this CD a general recommendation, but if you are a big fan of hardcore and raw rhymes then you might want to give “Walking Coma” a chance.