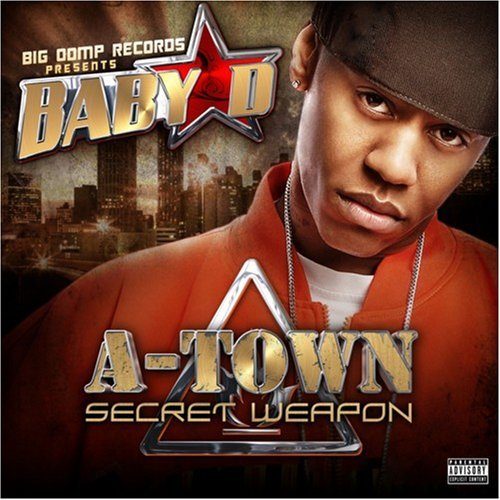 Having bubbled just below the level of widespread underground recognition for a while now, Baby D is set to drop his major label debut, “A-Town Secret Weapon,” on Koch. Unfortunately, he’s not going to be around to capitalize on the opportunity, as he is currently being held without bail in Ohio for allegedly trafficking cocaine, and he faces pending charges of assault in Tennessee as well.

Now that he has added his name to the long list of rappers to have run-ins with the law, Baby D is also hoping to join the ranks of those to achieve cross-over success, as the format of his new album makes clear. A quick run-down of the song titles on offer here is indicative of the direction of this release: flossy tracks (“So Fresh” featuring Sandman and BackBone, “Icey” featuring Shawty Lo and Gucci Mane) intermingle with songs for the ladies (“Get It Girl” and “Girls Gone Wild,” both featuring Blazed), and the obligatory rims ode (“Big Boy Whips”) jostles for space among the money-chasing anthems (“I’m Bout Money” featuring Blazed, “One 4 Tha Money”). If that doesn’t sound familiar to you by now, it should.

The beats on display, while decent, are equally predictable. DJ Montay handles all the production duties, and it’s pretty standard fare, with fizzy synths laid over the resonant kick and snappy snares of the 808. It’s all very indistinct, sounding like any other cookie cutter Dirty South rap song on the radio, from the chopped and screwed choruses of “Big Boy Whips” and “Icey” to the wannabe Lil’ Jon hook of “Put’em Up.” The only song that ventures away from this formula is “Do It,” which follows the “snap music” trend with a simplistic beat that is nevertheless effective, perhaps because it sounds different from everything else here.

Baby D’s rhymes are formulaic as well, in both their content and their delivery. While he possesses an energetic presence on the mic and competently rides each and every beat, his voice and flow resemble countless other southern MCs who occupy the higher registers, such as Chingy and the late Pimp C but without the personality of either (yes, even Mr. Right Thurr). Even when catching an assist from guests Gucci Mane and Shawty Lo on “Icey,” his lyrics suffer for sticking to the tried and true:

“Baby D, Gucci, Shawty Lo, it gotta be a hit
I walked up in the club chain hangin to my dick
I know that I’m the shit, so haters all talkin down on me
Keep a fo’ pound on me so get from ’round homey
‘Bout a half a mill on me, look at my wrist
The moon and the stars don’t shine like this”

The word that pops into your head throughout this and virtually every other lyrical effort is “generic.”

He finally turns to more weighty material on the last two songs, and the change of pace is as welcome as it is jarring after twelve straight tracks of stale concepts. “Get Out” featuring Escobar and Loko is a narrative about struggling through a prison bid. Escobar’s rudeboi chorus sums up the mood as he croons, “They locked me in the jail for twelve months and ten days / I’m just thinkin about my baby, I just can’t wait to (get out).” The closer, “For My Niggas,” is his expression of solidarity with “the ones that’s locked in the pen” and “tryna play it to win.” Given Baby D’s current situation, these songs are both refreshingly different and sadly fitting, and they make you wonder what could have been if he had focused on such themes throughout.

In the end, “A-Town Secret Weapon” comes across as one big clichÃ©. That doesn’t mean it’s awful, but it does mean that it’s stale, as the re-tread of tired radio styles gets old real quick. Baby D is a moderately talented newcomer who could likely do much better than this release indicates, but he doesn’t look like he’ll have the chance to take that next step any time soon. I wish him the best of luck in his legal affairs, but I can’t do the same for his album sales.