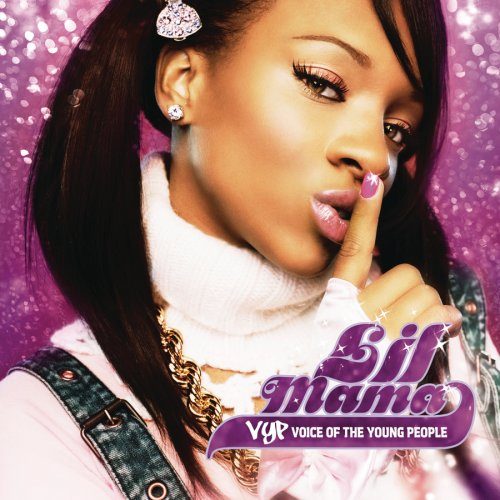 I’m not gonna lie. The first thing I thought when I opened up my promo copy of Lil Mama’s “VYP: Voice of the Young People” was, “Flash hates me.” Why else would the venerable RapReviews editor single me out for this drivel? Before receiving the album, my only exposure to Lil Mama was through last year’s ubiquitous “Lip Gloss,” the smash single of boom-bap drums about her stylish make-up options. A chorus of “My lip gloss is cool / My lip gloss be poppin” didn’t exactly portend a noteworthy debut album.

But that is exactly what Lil Mama has delivered, with considerable help from some A-List production by the likes of The Runners, T-Pain, and Scott Storch. While she repeatedly proves her ability to recreate the radio friendly formula of “Lip Gloss” on tracks like “Shawty Get Loose” and “What It Is (Strike A Pose),” it’s the unforeseen dose of heartfelt reality on the latter half of the album that elevates “VYP” above the hip-pop competitors.

The album is roughly divided into three sections with a pair of club bangers tacked on as a sort of epilogue. In the first section, Lil Mama builds on the momentum of “Lip Gloss” with a series of up-tempo tracks that could easily be hit singles in their own right. The frenetic percussion and squealing sound effects of The Runners-produced “One Hit Wonder” sounds primed for airplay, and Lil Mama cleverly plays on the perception of her that crept up after the success of “Lip Gloss” with the tongue-in-cheek hook, “One hit wonder, oh one hit please!” While her voice and flow aren’t quite on par with the other big name women in the game, she does ride the beat with authority and even convincingly flips a double-time flow on the second verse. “Shawty Get Loose” is already making waves internationally with its signature T-Pain production and Chris Brown on the Auto-Tune. The only real clunker in the bunch is “G-Slide (Tour Bus),” and that’s only because of the sing-song chorus to the tune of “The Wheels on the Bus.”

Lil Mama signals the beginning of a new approach with the “Gotta Go Deeper” skit, where she announces, “Now that we past all of that and it’s obvious that I’m true to the game, we gotta go deeper.” Her first effort here is “Stand Up,” a slow paced thumper produced by James “Groove” Chambers where she chronicles life in the ghetto “around my way.” It’s fairly generic as far as these songs go, but it sounds sincere and is helped by her half-sung delivery which turns out to be just as effective as her rapping, if not more so. The highlight of this section and the album as a whole is “L.I.F.E.,” a painful lament of her mother’s failure to be there for her over the years. She is remarkably confessional, which helps lines like the following hit home even harder:

“I wake up every day to the same old foster mother
I ain’t got no pictures of my mother
She was a crack fiend, nothing like ‘Pac mother
She didn’t make a difference, even though she could’ve”

The autobiographical “College” featuring Yirayah is equally stinging, as it tells the tale of her going to visit her father in prison, or “college,” as her mother euphemistically called it. Narrated through the eyes of a young child, “four years from a newborn,” the confusion and pain is palpable, and it is all underscored by a beautiful chorus and subtle touches like the humanizing piano highlights that break up the synth-dominated beat.

From here, Lil Mama moves on to the realm of relationships after her “Emotional Rollercoasters” skit and scores an instant winner with “Broken Pieces.” The beat is a subdued concoction of a low-key electric guitar licks and Kanye-style drums that captures the mood perfectly. Lil Mama puts forth a unique delivery concept, arguing with herself in the mirror over her devotion to a no-good man and her inability to break away. The most compelling part is the final verse, when she alternates rapping and singing to depict her battling emotions. Cool & Dre contribute a moderately interesting beat for “Swim,” a rather unremarkable song about bridging the gap in a relationship between Lil Mama as a mermaid and her earth-bound love (“He walkin but he wanna swim with me”). It’s the only skip-worthy moment on the second half of the album, and it’s followed by the punchy bass and horns of “Truly In Love” featuring Peter Toh, which finds Lil Mama wondering if she and her man have what it takes to last. She is primarily singing again here, but it doesn’t come across as forced, so it works.

The album closes out with the pulsating “Make It Hot” produced by James “Groove” Chambers and the synth-and-hand-clap exercise “Pick It Up” by Scott Storch. Both are good and could very well be hits, but after the confessional material that came before they feel less than fully inspired.

Needless to say, I was very pleasantly surprised by the quality of this album from Lil Mama. After hearing her first two singles, it would be easy to write her off as a flash in the pan rapper engineered to be club-ready and palatable to the kiddies. Instead, she comes across as remarkably authentic and comfortable with herself, occasionally rapping, occasionally singing, occasionally dispensing with rhyming altogether in order to make her point. She also doesn’t resort to the sex schtick that dominates the raps of so many other femcees, and it doesn’t seem like a Kidz Bop version of Lil’ Kim as much as a different prototype for female rappers. Don’t get me wrong â€“ she’s no Jean Grae on the mic and never will be. But she can definitely hold her own with both her flow and lyrics, and the powerful subject matter more than makes up for the rest. The fact that she is still a teenager makes it all the more impressive, and I for one hope to hear more from her in the future. For now, “VYP” is a solid debut that covers a broad range of styles, and it deserves to catch notice beyond the many radio spins it is sure to garner.