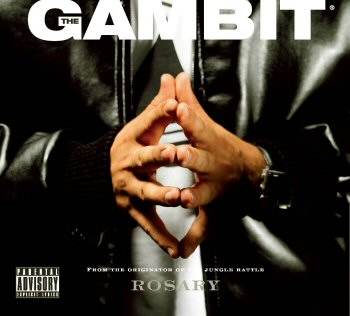 Like most Americans, I can be quite jaded as to the contributions of other countries to rap music, but even I can recognize that international hip hop is going to be a key component in the culture’s evolution in the new millennium. From Cuban supergroup La Fabri-K to the mind-blowing skills of artists like Kenya’s Bamboo on display in the film “Hip Hop Colony,” musicians the world over are poised to make a name for their local hip hop scenes. Just as in the U.S., international hip hop styles range from derivative to left-field original, and with his debut album “Rosary,” Finland’s The Gambit hopes to convince you that he belongs to the latter group.

According to his bio, producer/rapper The Gambit is the originator of a sound called the “jungle rattle,” which is “characterized by hypnotic and mystic melodies, pulsating rhythms, highly stylized vocals and deep symbolism.” More to the point, he likes to use shaker-style percussion instruments and play on his nickname, the White Rattler, which he earned while living in Florida in the 1990’s. While he credits his southern accent and musical sound to his time in Florida, his style exudes a California feel much more, at least to this reviewer’s ear. His beats sound a bit like a mash-up of early DJ Quik and Scott Storch, only without the delicate layering of the former or the melodic deftness of the latter. He also has a predilection for weaving Madlib/Oh No-style sound effects into his compositions, which, although not the best you’ll hear, are at least well-crafted and pleasantly diverse.

On the mic, Gambit is hit-or-miss. For the most part, he sticks to well-worn hip hop subject matter: smoking weed, chasing girls, talking shit, and dissing haters. While he occasionally spits a tightly composed sixteen bars, his raps are usually just okay and sometimes downright paltry. But since his weakest lyrical outings tend to be on the club-ready tracks, it’s forgivable in a P. Diddy kinda way. Another salient feature of his vocals is the accent, which is a bit unusual to say the least. Given that I can’t speak a lick of Finnish, I can’t hate on a foreign-born rapper who became fluent enough in English to write rhymes in the language, but the combination of a Finnish and southern accent just isn’t something you hear every day and is noticeable as a result.

Because the MC skills are mostly middle of the road, the music determines the high points of the album, and there are a number of them. “Grillin'” featuring Psycho Les of the Beatnuts sounds like a top-shelf Eminem production with its syncopated electric guitar riff and shuffling beat. “5-0 (Don’t Stop)” cleverly weaves in a siren sound effect as part of the beat, a la “Fireman” by Lil’ Wayne. “What’s Real Is Real” boasts some smooth piano chords and melodies that break down and then re-build over the course of the song. While most tracks feature the sun-baked style The Gambit favors, a few others venture outside this comfort zone and succeed well. “Farewell My Lovely One” has more of an east coast vibe, and the descending strings melody interacts nicely with the vocal sample that ends each line, in addition to underscoring the somber theme of the lyrics. The album’s best track, though, has to be the closer “Rosary,” which features opera singer Marika Krook singing the hook. This beat is sweetly layered, and the strings have an ominous feel to them reminiscent of a more over-the-top RZA. The operatic chorus further adds a touch of the cinematic to augment the song’s scale.

Not every song is a winner, though, and the lackluster tracks drag the album down somewhat. “Illustrious (Opium)” uses some Timbaland style drums with Gambit’s signature rattle sound to little effect, because his attempt at menacing vocals sounds forced and ruins an otherwise decent minimalist beat. “Hoo-Ha! (Hood High)” is the only track produced by someone other than The Gambit, and the song’s electronica-on-molasses vibe comes across as generic, as do Gambit’s “where the bitches at” refrain. Another surprising moment is “We Like It, We Ride It” featuring Alexander. The slowed down acoustic guitar beat isn’t bad, but it sounds remarkably similar to Ludacris’ “Freaky Thangs” off “Word of Mouf,” from the sex raps and crooned chorus even down to the matching chord progression. It’s moments like these, along with some truly subpar lyrics (“Early black, I’m slowin down / Sun is goin down / I feel like slowin down”) that keep “Rosary” from reaching its potential.

Overall, however, the beats hold up their end of the bargain, providing a relaxing, west coast throwback atmosphere (if you can call the early 90’s “throwback”) that stays consistent most of the way through. Gambit’s emcee skills, on the other hand, leave plenty to be desired, and in the end it has very little to do with the accent, which fades to the background after a few songs. While it’s not an overwhelming debut, it is an essentially enjoyable one that offers a promise of further good music, especially if Gambit can tighten up the production just a touch and hone his lyrical skills. Consider Finland officially on the map.