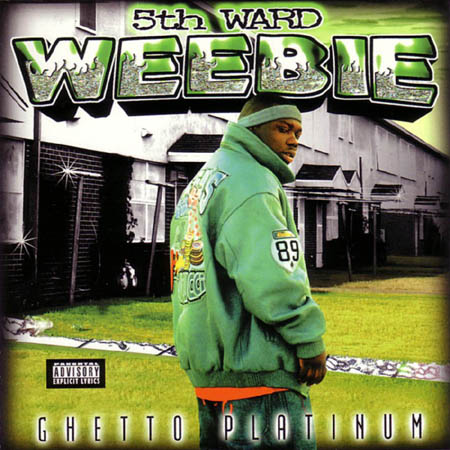 At first appearance 5th Ward Weebie’s “Ghetto Platinum” appears to be a typical No Limit Records release, complete with the typical Pen & Pixel album cover showing Weebie’s name in gigantic bling’d out lettering. Given the album’s first song “Show Dat Work” features both Mystikal and the group Kane & Abel, it might seem even MORE obvious that Weebie is another of No Limit’s prolific series of albums in the late 1990’s (at times it seemed like there was a new CD every single week). Closer inspection reveals a wholly different reality. The infamous No Limit tank is visibly absent from the back cover, and is instead replaced by a UFC Octagon style logo featuring a pair of opened handcuffs which defines 5th Ward Weebie as a member of the Most Wanted Empire. There’s scant little information available online about this label, which can largely be blamed on Wikipedia’s “notability” policies bleeding the internet dry of information about obscure artists and labels. Nevertheless from memory and from what little information is available Most Wanted was an imprint started by a disgruntled Kane & Abel when they left No Limit, a fact confirmed by the inner jacket of “Ghetto Platinum” advertising an “Off the Tank” compilation of former No Limit artists. 5th Ward Weebie had produced for the twins including their hit “Wobble Wobble” so it seems he jumped ship along with them to join their label.

In hindsight this may have turned out to be a bad move for Weebie, as both Kane & Abel were sentenced to three year bid in prison in 2001 for their role in a New Orleans drug trafficking ring. Since their release the brothers have continued to work in the urban entertainment field, but the momentum they had from jumping “off the tank” at the peak of No Limit’s popularity has long since passed. Ironically Weebie ended up jumping TWICE, undoubtedly realizing that his career wouldn’t be promoted while the twins were in jail, and even before they were incarcerated he had already released “Take it to the Hole” on South Coast Music. Things only get more obscure from that point on as he released albums in 2003 and 2005 on ever smaller imprints to scant little press (I suspect Murder Dog may have been the only magazine to review them). “Ghetto Platinum” was 5th Ward Weebie’s best shot at fame as an ex-Tank soldier, a 17 song album with the feel of No Limit without Percy Miller’s hands in his pockets. Weebie shows some promise as a lyricist on “Show Dat Work,” undoubtedly having been coached by the fellow No Limit Soldiers he raps with:

“Ooh lil’ mama lookin for Weebie and Mystikal and Kane & Abel & on your cable
Gotcha twerkin and workin on you grandma kitchen table
Now, drop a lil’ lower, pop a lil’ lower for me baby
Do what you do for part two, cousin don’t try to play me
Breakin it off for fifty, poppin it in my city
A million dollars gone holla keep ’em shakin in they parlor
Cause I know you like to go off, and show off for Weebie
Take it slower beat time over, bend over easy
Ooh baby like it when you jiggle and wobble
Walkin it like a model ’bout to pop you a bottle
Cause I know you act a fool wit it, went to school wit it
Bring it ’round the world I like to see you move wit it
Bout to boil like a fire, comin out the desire
Makin ’em take it off while you shake it like a dog”

The sound of the songs start to bleed together the longer you listen to the album. “Club Hoppers P Poppers” sounds remarkably like “Show Dat Work,” and “Stop Mouthpiecin'” sounds remarkably like “Word.” Three of these four songs were produced by different artists – “P Poppers” was done by KLC, “Show Dat Work” by Hex Luger, “Stop Mouthpiecin'” by FullPack and “Word” is KLC again – yet there’s an incredible blandness and similarity throughout. This is even more surprising coming from KLC, given how many #1 hits he was part of in No Limit before (as part of Beats by the Pound) and since (as part of Medicine Men). Weebie himself becomes monotonous, failing to live up to the potential he showed on the introductory track. The album attempts absurd Lil Jon style call and response with “Beat That Nigga,” tries to create a hoodrat dance anthem with “Where Ya Baby Mama” and even attempts to coin “Actin’ Bad” as a catchphrase. All fail. “Show You” with Ms. Tee is one of the rare songs on the album to break from cliche, as his female guest sings a fly hook and D-Funk plays a mean guitar to the FullPack beat. Once again Weebie shows potential as a rapper he elsewhere fails to capture, spitting a quick if somewhat misogynistic track:

“She had thick thighs with nice hair, great thong with cute lips
Everytime that you see her she’s always wearin nice gear
Prada shoes Prada pants, come on girl let’s see you dance
Bend over and touch the floor, pull it down and show me more
Have you ever heard of me, tearin it down wit Ms. Tee
Spell it for me please girl, W-E-E-B-I-E”

The album closes with the aptly named “Whatever,” summarizing my feelings towards 5th Ward Weebie as a whole, although the cameos from Mr. Serv-On and Three 6 Mafia end things on a high note. These days the best hope for 5th Ward Weebie may be that somebody mistakes him for Webbie, even though going “I-N-D-E-P-E-N-D-E-N-T” turned out to be an all but fatal career mistake for this 5th Ward veteran. With better direction and production Weebie might have been something but too many monotonous unoriginal songs and too little promotion leave him a place in obscurity next to a lot of other former or current No Limit rappers without Miller for a last name.