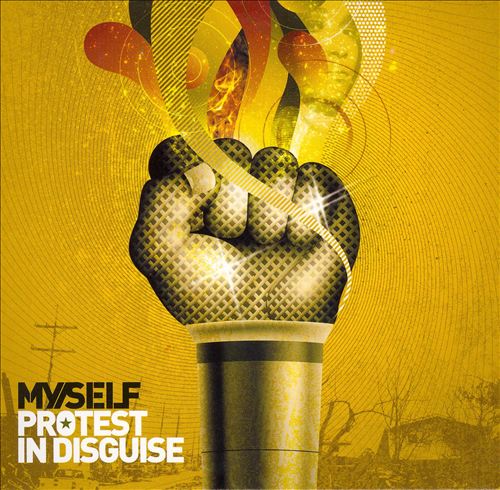 MYSELF :: Protest In Disguise

One of my favourite films is “Before Sunset,” featuring Ethan Hawke and Julie Delpy. Delpy’s character, as a side-note, happens to work for the Green Cross, and she launches into an interesting speech that I have been unable to forget. She talks about how in charitable organisations, those working there tend to get the job done without ego – but the irony is that their organisation would go further if their were a couple of leaders with huge egos that could drive the company on, even if it conflicts entirely with the humility that seems to underpin the mission statement. In other words, sometimes you need to contradict your beliefs in order to get the job done more effectively. Hip hop understands this more than most, as 50 Cent can single-handedly “destroy” hip hop but save it with a three-track soulful streak in the middle of “The Massacre.” Tupac could, let’s face it, act the fool – but tracks like “It Ain’t Easy” would somehow make you willing to ride for his cause as he disarmed you with humility. Which brings us to Myself.

“Protest In Disguise” – ne’er a truer word spoke. A dreadlocked socially conscious rapper/singer would automatically conjure up Bob Marley and a young Mos Def – not the slick genre hopping of Santogold. But in the opening four tracks, Myself manages to cover hip hop, soul and punk, complete with incredibly catchy choruses (I still haven’t got “Baby… You Drive Me Crazy” out of my head). Yes, this is revolution music – but with corporate sensibilities and know-how. You may be expecting me to puncture such contradictory music with a witty barb or two, but I shan’t be doing that today. You see, you have to bait the hook to catch the fish – and Myself has some real messages on his album. Whether it is the freedom soul of “God Is So Funky/Goddess So Funky” or the stinging satire of “Katrina,” anything goes in the world of Myself.

Lyrically, as a rapper, he ranges from solid to excellent; as a singer, he does a decent enough job – more professional than inspirational. To be honest, his voice isn’t his greatest asset – it is fine but unremarkable. But he more than makes up for any potential shortcomings with strong concepts, lyrics and choruses. Take “Get Up” which, to all intents and purposes, sounds like an underground dance anthem, but ends up (on closer inspection) being another social critique – and is followed by the random free-association of wicked, weirdly wonderful ska track “Rude Boy.” In fact, the album flies by on the first ten tracks, only slowing near the end.

What Myself represents depends on your point of view. Maybe a dilution of different skills – he isn’t a truly great rapper, and certainly not a legendary singer. Thus, you might think him a jack-of-all-trades, master of none. However, that would be seriously unfair – his talent lies in making clever and thought-provoking music, but packaging it into a digestible form for today’s generation. That isn’t to say that he will break through into mainstream, but he should find a captive and willing audience. Plus let’s face it – Mos Def hasn’t exactly made a great album in a long time, since he switched his focus to acting. So an artist such as Myself is a welcome addition to the new generation of interesting and socially conscious artists in the world of hip hop, soul and anything the hell else he wants to do.