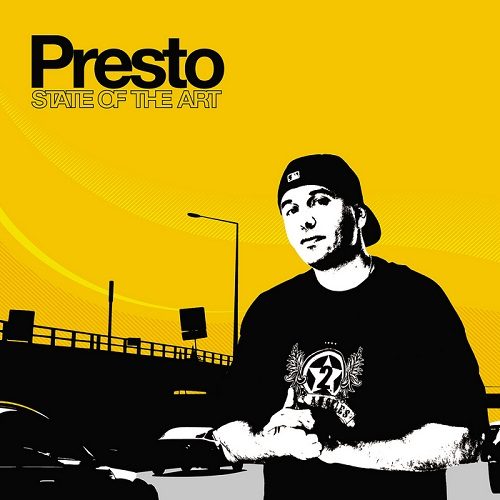 Presto :: State of the Art

It’s refreshing to find an artist who can emulate the music of a classic and admittedly bygone era both successfully and without the rancor that often accompanies such ruminations on the past. It’s especially nice when the music works as a contemporary piece of work too, never sounding contrived or passÃ©. For the prolific beatsmith Presto, occupying such rarefied air is all in a day’s work, as his musical compositions deftly navigate the difficult terrain between retro chic and banality that traps so many artists.

On his latest release, “State of the Art,” Presto has once again built an album around a mood â€“ relaxed, jazzy, subtle, with the occasional musical element from left field thrown in for kicks. His style is very Native Tongues with a hint of Pete Rock in some of his horns, and the organic sound is tied up in a bow with dusty drums that drive the tracks. The sample laden style is quite nuanced despite the mellow vibe the music exudes, easily drawing you in and only later revealing its secrets.

To bring his beats to life, Presto has enlisted some excellent help from an impressive bunch of MCs. From the big names (Large Professor, CL Smooth) to the lesser knowns (Ark, J Theory), all pen verses worthy of Presto’s sonic gems and keep the chilled out vibe going. After a brief instrumental intro (“Listen”) that hints at Rjd2 in its intricate layering of musical elements, you are hit with a collaboration between Sadat X, O.C., and Large Professor entitled “Conquer Mentally.” This one is very muddy sounding, almost dissonant in its bass-heavy sonic palette, and it comes together nicely as one of the album’s grimier tracks. Sadat X and O.C. offer up good verses, but Large Pro easily steals the show with his entirely believable “you can’t get with this” bragging (“conquer mentally, hard not gently / the god of the century, large from out the trench / PX yo, building on the track by Presto / rhyme style fresh, roll way past the threshold”). Next up is “Street Sport” featuring Ark, and while the whining synths might be a little off-putting at first, the song develops over time and Ark delivers an outstanding lyrical effort. Similar to Masta Ace’s “Soda and Soap,” he weaves the names of all 32 NFL teams into his rhymes very slyly, so that you might miss certain ones (or even the concept itself) the first time around. Blu writes yet another stellar song for “Pour Another Glass” over Presto’s jazzy keys, echoing horns, and sleighbells, resulting in a beat and lyrics that bear the same ruminating feel.

Elsewhere, Raashan Ahmad keeps up his streak of excellent performances on “The Pressure,” a song which sounds both musically and lyrically like early ATCQ, especially on the hook. “Mass Quality” featuring J Theory has a bit of a Little Brother feel, which means it has that Pete Rock knock-off quality 9th Wonder has perfected. The ever elusive Fatlip shows up on “What’s What” with Kim Hill, resulting in one of the album’s smoothest songs. The jazz guitars and shuffling drums play off each other perfectly, and Fatlip’s flow hugs every curve of the beat. “Feel Me” featuring T Weaponz stands out among these tracks, probably because of the different sounds it incorporates, namely the eastern sounding violin loop and slightly off-pitch strings in the background. It’s an effective change of pace in an album that has few.

This consistency of sound works well in keeping things flowing smoothly throughout, but it has the down side of making the songs blend together a little too much. By the last third of the album, the feel of the tracks gets so similar that it’s hard to remember each one in its own right, even after a few listens. The last four songs before the “Outro,” while all well put together in their own right, fail to distinguish themselves due to their similarity. “Let It Circulate” featuring Dhurti Whoutr has a nice aquatic feel to the keys and the Nas sample is definitely appreciated, but when “Plain Jane” featuring Kim Hill follows right on its heels with an almost identical drum track, some of the allure is lost. Likewise with “Go” featuring Trek Life and “Still Here” featuring In-Q, both of which are nice (especially the skittish horns of “Go”) but which are less than striking because of their sameness.

The album closes with a Large Professor remix of “Conquer Mentally” which highlights the album’s few deficiencies by going in a totally new direction with its sound. The distorted guitar riff and in-your-face horns take a more aggressive musical approach than Presto has adopted throughout “State of the Art,” which makes the album’s last few songs sound even more impoverished by comparison. It’s no stigma to get shown up on the boards by Large Pro, and to be fair, by this point Presto has already proven his talent at nimbly incorporating multiple samples into subtle compositions. But in the end, the consistently low key vibe keeps “State of the Art” from being the exceptional release it is clearly aiming to be. That doesn’t mean this one’s not entirely enjoyable â€“ I couldn’t pick a bad track in the bunch, and there are a number that will have you coming back for more for both the lyrics and music. Although I can tend to nitpick in my quest for “Soul Survivor” levels of pound for pound production prowess, I can’t deny that this is a solid album with lots to recommend. Hip hop needs more musicians who are willing to carry the torch without riding too many jocks in the process, and Presto has passed this test with flying colors.