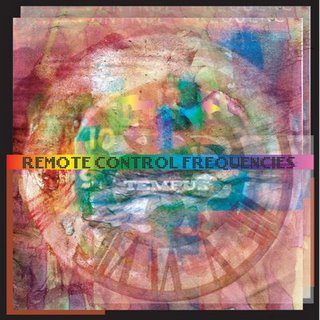 Chicago’s Remote Control Frequencies brings sound to another level. The duo consisting of drummer LG and vocalist/instrumentalist R-Rock have found their niche in combining the elements of hip hop, electronica, and psychedelic rock in their newest installment of “Tempus.”

After beginning as a concept project with “20,000” in the late 90s, in 2004 the two were reunited after jamming together back in North Carolina. As R-Rock began the label of The Secret Life of Sound, Remote Control Frequencies was on its way to creating an album that exemplified the very essence of the two. With the combination of extreme sounds satiated with gadgets, instrumentation, samples, and vocals, RCF reintroduces an uncompromising, distinct sound in “Tempus.”

“Tempus” which means “time” in Latin, can only begin to describe the journey through time and space Remote Control Frequencies takes us on. Amidst an assortment of style and sound, “Tempus” incorporates a fusion as to what RCF has potentially become through the years. Many have coined the phrase “amoebic” to describe their music as the signature sounds go beyond what is fluid and recognizable. Like the amoeba, the music has no definite form, does not follow a certain movement, and is unpredictable. From the beginning to the end of “Tempus,” the album follows this theme of indistinguishable patterns and an unsystematic order.

Even in an album full of disarray and frenzy, RCF still maintains a sense of balance while attempting to convey underlying messages of realism and awareness for one’s surroundings. With its heavy drums, vibrating guitars, and robotic voices, “Wrong Planet” challenges the world to face the existing lack of integrity present within many individuals. Although the lyricism is at a minimum, R-Rock shows that television corrupts minds and using our brains is more ideal as he says:

The heavy rock sounds emitted in “Shoegazer” goes beyond explaining the genre of music made popular by U.K. bands in the late 80s that ultimately describes band members who used to gaze at their feet while performing,. While incorporating this specific alternative rock sound that reflects extensive guitar effects and echoing voices, the expansion from this genre now integrates an atmospheric sound and distortion. Not only is this sound reflected, the message of not wasting time posing as a “shoegazer” flourishes throughout the track.

With a similar message in “All in the Way You Think About It,” R-Rock explains that everyone should act and make changes if necessary. He shows that interpretation is the key in determining the outcome of various situations. Although the positive message from RCF is a clear one, the excessive echoing of R-Rock’s voice throughout the track is too much to take in at one time to the point where he is almost inaudible.

Although original in content and delivery, “Tempus” lacks in overall continuity and order. It almost seems as though each song was haphazardly placed one after the other without any real correlation to one another. Tracks such as “Proxigean Spring” that describe extraordinary tidal ranges through instrumental sounds to “Insomnia” that goes into detail about the difficulties of falling asleep, fall short while not connecting at all. The haphazard sinister laughing throughout the instrumental of “From Tempus to Timbuktu” and “Escape Plan” that incorporates a jumble of random electronic sounds lacks in true production. Interestingly enough, R-Rock praises himself for “having the tendency to always chop everything up and paste it back together.”

One thing is for sure, I have never heard anything quite like Remote Control Frequencies. In some aspects, I suppose this is a positive thing, but on the other hand, the extremes were definitely met and far beyond my comprehension of “pseudo-electronic” music. Although their overuse in sound and unfavorable lyricism was present, without a doubt, RCF is definitely on the right path in producing unique sounds as their techniques are unsurpassed. All in all, their use of electro-harmonix pedals and attempt to incorporate the core of hip hop, rock, and electronic was a brave effort that exposed their distinctive talents as artists. With this in mind, the frequencies will yet again be tested.