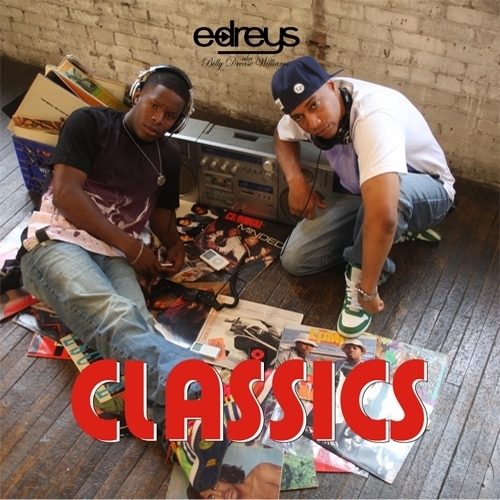 This is the mixtape I’ve been waiting for – and for a long time at that. In fact, it has nothing to do with the artist Edreys (pronounced “E-Drease”) but more to do with the selection of beats – straight CLASSICS! It helps that the MC is really rather bloody good. This review will be devoid of any clever shit, as I’m buzzing off this mixtape too much, so let us get into it quick sharpâ€¦

So take one wicked MC, throw him over a bunch of truly legendary beats, and watch him do his thing. The only real negative I can come up with about “Classics” is that it is apparently “mixed” by DJ Lo Pro – this really isn’t mixed, and is actually quite poorly put-together in places. Aside from that, there is so much gold to mine from just an hour – and so many memories to be evoked. I’m talking “Children’s Story” and “Warm It Up, Kane.” I’m talking “Ain’t No Half-Steppin'” and “Paid In Full.” Even ones like “Public Enemy No.1” which you may have forgotten about, and just make you let off an internal “Oh shit!” – those kinds of beats.

What’s more is that with that level of instrumentation underneath Edreys’ sneaks, you’re positively waiting for him to screw up – he doesn’t give you the satisfaction. Line after line of dopeness: punchlines, kicklines, stories, re-interpretations, he can ride over most of the tracks flawlessly. Perhaps his voice isn’t immediately identifiable, but everything else is. More than anything, however, he is EXCITING. Sure, a bit judgmental, but you will sit up and take notice. Edreys is an MC that takes his art seriously, and one hopes that he can kick on from this and construct a great album – riding over classic beats is one thing, but CREATING classic beats is another.

I’m not the biggest fan of mixtapes – they either have to be expertly constructed (e.g. DJ Green Lantern’s stunning work on Nas’ “The Nigger Tape”) or just hijack straight FIRE beats. This one belongs to the latter, and foregoes modern music in favour of tried and trusted beats with twenty years of vintage. I’m not sure if anyone has done it like this before, and it would only really work with an MC that truly loves that 1988 vibe – it never sounds disingenuous, and Edreys does a magnificent and innovative job from start to finish. I never give mixtapes Classic rating (9.0 or more) – unless they only comprise of original music – but this is one that has run the closest thus far. I just hope he hasn’t set the bar too high for his forthcoming debut album “Good Morning Amy.” Safe to say I’ll be copping that, and you shouldn’t hesitate about picking this up pronto.