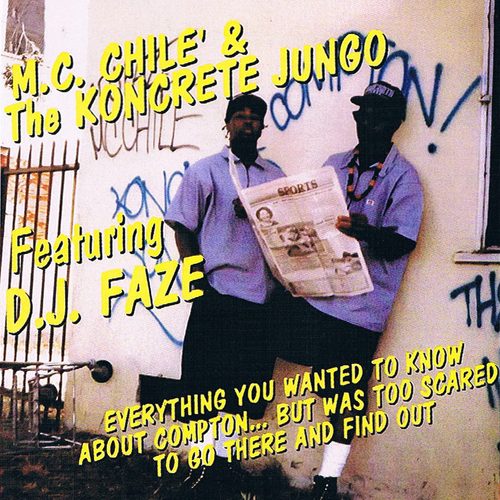 M.C. Chile’ & The Koncrete Jungo :: Everything You Wanted to Know About Compton… But Was Too Scared to Go There and Find Out

If there’s a fine line between sobriety and satire, the title “Everything You Wanted to Know About Compton… But Was Too Scared to Go There and Find Out” steamrolls all over it. The album was released at the tail end of the boom years of Compton rap, at a time when those interested already got to knew everything they wanted to know about the aspects of the City of Compton the title alludes to. In fact, between 1988 and 1992 rap music created that very demand and simultaneously supplied it. N.W.A weren’t the only ones to base their raps on the harsh reality of later ’80s L.A. gangland, but “Straight Outta Compton” was not only an explosion that made gangsta rap spread like a wildfire across urban and subrurban (and even rural) American territory, but also a blessing for Hub City rap artists themselves, namely now historic West Coast figures DJ Quik, MC Eiht and King Tee. A number of people jumped on the bandwagon during that time, but few did it as unluckily as M.C. Chile’ and his undefined crew (D.J. Faze is the only verifiable member).

Based on the title alone (a spoof of ‘Everything You Always Wanted to Know About Sex* (*But Were Afraid to Ask)’, the name of a breakthrough sex manual of the sixties, famously parodied in film by Woody Allen) there couldn’t have been a single rap listener back then who perceived such an album as anything other than a – deliberate – joke. But M.C. Chile’ (pronounced “Chili” – as in chili/chile pepper) tells another story. Completely unrelated to the CPT, single and opener “I Just Wanna Rock You” is the first taste of the relatively sharp pen he wields. Again the song title, as well as his self-description as “modern day Casanova,” may obscure his intentions, but at its foundation “I Just Wanna Rock You” is about treating your love interest respectfully and honestly, “a side that’s seldom expressed / the true feelings for the opposite sex.” Accompagnied by an ’80s sample and even a sax solo towards the end, Chile’ dissects the dating scene from different angles:

“This a little something I decided to dedicate
to all the fly women who really don’t appreciate
the man who understands and give ’em total respect
They rather have a brother that down ’em and keep ’em in check
Put ’em on a lock and a chain
Play with they hearts and run serious mind games
(…)
Throughout history men have dealed with this mess
So let’s confess to our damsel in distress
Let her know we’ll keep comin’
Cause every good man know he needs a good woman
by side, through thick and thin
And that’s how it’s been since time began
As Eve ate from the forbidden fruit
Just so Adam can knock the boots
As Jack ran away with Jill
to a cheap motel to catch a quick thrill”

Maybe it’s just good game, particularly as the rapper sports a bit of a mack flow. The following songs however suggest that M.C. Chile’ has a thing for honesty. He fully adopts the juvenile ghetto dweller perspective in “Growing up in the Ghetto,” purposefully inserting provocative statements:

“By the age of 15 I was known in Compton
Approach talkin’ s–t and it’s ya ass I be stompin’
Wanted by the police since a youth
Smokin’ anybody from a preacher to a prostitute
I grew up in the ghetto, cause that’s where it’s happenin’
Gettin’ f–ked up over a short dog of Satin
Cause when we get alcohol in our system
We go huntin’ for a drive-by victim
Some punk on the corner tryina act hard
Give him a one-way ticket, destination the graveyard
(…)
Comin’ up in the ghetto gangsters came and gangsters left
Most locked up, others died mysterious deaths
One day they’re here, the very next they’re gone
Leavin’ a legacy of niggas that carry on
the name, the fame, s–t stays the same
Youngsters comin’ up quick by sellin’ lleyo in the dope game
(…)
My job is bein’ a nigga, so to tell with a pension
Supported with a check by the government every two weeks
And sell dope on the inner city streets
It’s a shame but that’s the way life goes
Growin’ up in the ghetto”

Although lacking the bite of Ice Cube’s “How to Survive in South Central” or the blues of Comptons Most Wanted’s “Growin’ up in the Hood” (both from the “Boyz N the Hood” soundtrack), M.C. Chile’ & The Koncrete Jungo’s “Growing up in the Ghetto” still captures modern day American ghetto misery, and it sets up the awakening that is about to follow. “Free at Last” takes up the famous Martin Luther King speech as Chile’ discusses the prospect of being free at last in modern times, identifying the drug epidemic and gang violence as obstacles standing in the way of freedom. With this song Chile’ completely ditches the gangster persona. A younger audience only politicized in more recent years might be stunned by the militancy and poignancy found even on an obscure album like this. While “Free at Last” moreso addresses the man in the mirror (“We never changed our ways / we’re physically free, but mentally slaves”), “Here Comes the Slavemaster” turns the attention to law enforcement and “the other man” (whites) in general, to the point of advocating ‘active’ self-defense. As history has it, M.C. Chile’s observations still strike a nerve some 25 years later:

“How can you call yourself free
jam-packed in the ghetto surrounded by poverty?
Huh, you got the county to rely on
But that’s just enough for us people to die on
(…)
As I think back to when I was a little kid
I heard many tales about what the police did
But to a child he was a person to admire
You wanted to grow up to be a cop or put out forest fires
Years later things changed
They beat a homie so bad he don’t remember his own name
Then he was charged with assault
They said he reached for a weapon and it wasn’t the cops’ fault”

All this sounds good on paper, so why can’t “Everything You Wanted to Know About Compton…” get mentioned in the same breath (it would have to be quite a breath, admitted) as the albums that defined South Central, Compton and Watts (and Long Beach, Inglewood and Pomona)? Well, some crucial aspects keep the excitement factor low. The overall impression is rather poor. Original instrumentation exists next to amateur sampling and drum programming without really coming together. Vocally and lyrically Chile’ lacks the distinct flavor of the greats of his generation and while he’s rhetorically refined, he’s simply not that entertaining as a performer. S.D.E.G. Records could have been on to something with the combination of live instrumentation and canned music, but despite the involvement of experienced actors in the music scene (including label owner Swamp Dogg and, for two tracks, Alonzo Williams and William Zimmerman, who both successfully have contributed to L.A. hip-hop in some capacity), the album never gains track musically. The best sounding track is closer “It’s a 2-11,” and that’s because it samples “The Message,” similarly to Ice Cube’s “Check Yo Self” single remix and Seagram’s “The Dark Roads” (which one came first is unknown, possibly the latter). One thing this version gets props for is rewriting the police intervention from Melle Mel and Duke Bootee’s original.

As for the rapper, while his lyrical talent is evident, altogether his performance was still derivative and dated in 1992 and 1993. “Hassled and Ghaffled in the Back Seat” (sampling Cube) only superficially deals with the events of April 1992. “Off to Da’ Party” and “F–k With a Heavyweight” should create a rap/hip-hop identity for the Koncrete Jungo and M.C. Chile’, but they don’t. And “Sexline” stands out for a particularly revolting description not even the most notorious shock rappers could have conceived. I had the strong urge to clean my ears after hearing it.

Recently reissued by Essential Media Group on CD, “Everything You Wanted to Know About Compton… But Was Too Scared to Go There and Find Out” captures quite a few aspects of its era (“Here Comes the Slavemaster” would even floor the Geto Boys, “Free at Last” isn’t afraid to be intelligent, etc.), just not in the now classic form that we’re used to from the history books. In the end the content misses its mark by as wide a margin as the packaging.

M.C. Chile' & The Koncrete Jungo :: Everything You Wanted to Know About Compton... But Was Too Scared to Go There and Find Out
3.5Overall Score
Music2
Lyrics5.5