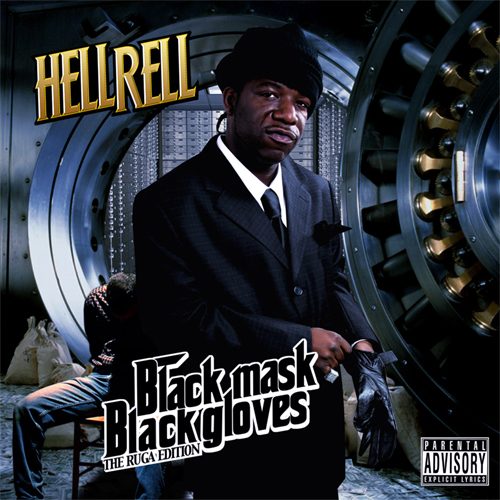 If you happen to be on the analogy section of the Rap SAT’s and come across the question, “G-Unit is to Tony Yayo as Dipset is toâ€¦”; the correct answer is “Hell Rell.”  Both brandish straight-forward thug personas and equally brutish lyrics to match. Not to mention respective stints in the pen (Rell spent two years behind bars on a drug charge). Furthermore, each plays his role as the henchman of their respective groups. The fact that the gangster tone on his sophomore album “Black Mask, Black Gloves: The Ruga Edition” is so believable might be the reason why he has a substantial following, or maybe he is just running on the fumes of Dipset popularity that reigned supreme earlier in the decade. Whatever the case, Hell Rell very much lives by the sword and dies by the sword when it comes to this gangster rap business, which is made especially clear as this album unveils itself.

Rell sticks to the tired but true formula of bragging about his women, possessions and hustling. In that respect he offers nothing new but, then again, it is rare to come across an artist that does not feel like a forced marketing bi-product. The genuine vibe of the headliner, in this case, is enough to give him a slight pass. But, even so, there is no excuse for a disc that does not attempt anything new whatsoever and “Black Mask, Black Gloves,” seems to fit that billing all too squarely.

Some of the gripes are immediately apparent from the beginning as the sporadic keys collide harshly against aggressive drums on “Intro (Black Gloves),” which plays out like a mixtape track as he just attacks the beat without a chorus. A few lines like, “80 years old, still pimpin’ from my wheel chair” might draw a smirk, but are hardly rewind worthy. Don’t worry though if you’re an established Hell Rell fan, most of the material throughout the disc is on a far more serious tip and is on par with last year’s debut “For the Hell of It.” To those who are wanting to hear some inspiring lyricism need to look elsewhere.

Much like The Diplomats albums, “Black Mask, Black Gloves” relies heavily on production, but here it’s a lot less consistent. The very best joints are sample-driven and aren’t overdone. “Get Ready” is one of the better earlier cuts, as the title is slickly played as a vocal sample as it rides into the chorus. He drops the following verse:

“Uh, I’m living by the mafia rules like Gotti was
I go broke, do a sex tape, and make it good, and sell it Hollywood
Competition, they all die, nigga you the fall guy
Baby I’m the baked potato, he’s the small fry
Got money, I ain’t gotta front on you
I let you keep your chain, remember I got one on you
That’s your crew, they ain’t tough, they going to run on you
I need a guinea pig, let me test my gun on you
So I can show you where to cop the white and get the tan
You get money though, forget your man
You get the bezel though, forget the band
You rappers wrestlers, then I’m Vince McMahon
My little homey just got initiated and he got he eat something just to show me he ready
Now motherfucker, you looking like spaghetti
I’m perfect timing with the diamonds so you know you gotta DVS me
I’m outta this world girl, you can’t GPS me”

Still, these lyrics will not land on any hip-hop quotable page anytime soon, but it’s doubtful that Rell is really shooting for that. The best you can hope for is a couple of enjoyable lines over a nice production.

“True Colors,” another sample-heavy joint, is the best track on the album, trumping the emotive trumpets of “Take An Oath.” “True Colors” is another song that just glorifies just how hardcore Hell Rell claims to be and manages to keep a full head of steam due to the dramatics related to the beat. The unpredictable source material, courtesy of Kajmir Royale, may remind some of M.O.P’s classic “Cold as Ice.”

The listener runs into problems when the beats do not suffice though. When the tough-talk is so cut and dry the disc become very tiresome if the music does not keep it aloft. The biggest missteps are “Push â€˜Em Back” which sounds like if a Pharrell beat and a Swizz Beatz beat had an obnoxious baby, whereas “Come On Baby Girl” is an unsuitable attempt for Hell Rell to cater to the ladies with a softer sound. Basically he sounds as perverse as any thug rapper trying to spit game usually does.

There is one more song that may interest the hip-hop academics, that is “Rumors.” This one is Rell’s attempt to dead all of the rumors about the Dipset breaking up or being weakened by beefs with the G-Unit. In the track he notes, “Cam’s doing great, he’s still an OG/And if you wanna beef with him you gotta go through me!” This further cements him as merely the henchman of a collective rap ensemble. Further, for the true skeptic, the proof just is not there as “Black Mask, Black Gloves” utilizes lesser known beat makers and only Sen (of 730 Dips) and JR Writer show up as affiliates to guest spot on the album.

“Black Mask, Black Gloves” offers a few thrills and a few frills. The title, in itself, establishes the featured artist as merely the frontline of the Dipset movement, who does all the dirty work. How else is a henchman supposed to attack besides aggressively and straight-forward? The disc unleashes the thoughts of another predicate felon. Amongst a barrage of mixtapes, it seems that “Black Mask, Black Gloves” might have been pieced together a little too quickly (as made evident with an Usher “Love in This Club” reference); thus, it does not differentiate itself from those street releases enough. If you want a run of the mill gangster rap album then feel free to pick this up, but otherwise give a long listen before considering a purchase.