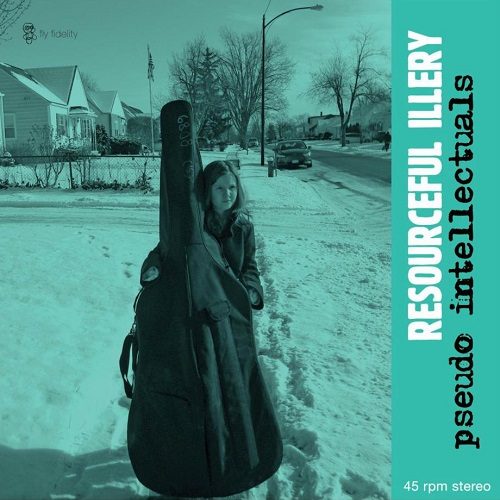 Who doesn’t like to be referred as an intellectual, but when it’s a pseudo intellectual that you’re being referred to it’s a whole different story. When I hear this term, the first thing that comes to mind is an oxymoron for the word “intellectual,” completing describing one that is simply a fake, a phony, and someone completely out of the realm of brilliance. With this in mind, it is interesting to see the level of acuteness that Pseudo Intellects of New York have to offer with their latest installation of “Resourceful Illery.” Comprised of the trio of Tone Atlas, Nick Zero, and DJ Cutler, the group has popularized their name with “Catalogue LP,” “Broke & Copasetic 12,” “Scion Sampler 16,” and “Blue Collar Funk,” to name a few. These individuals have once again come together to expand on their unique artistry. While boasting about the birth of their brainchild in Atlas’ living room along with recording sessions at the very same location, it is clear that this is a group that likes to keep it simple. It’s simply “no frills attached” music as Pseudo Intellectuals like to refer to their music as “simple in design” with the unpretentious use of an MPC2000, turntables and a mic. At first glance, it is a more modest approach to rap during an era of flourishing technology, but Pseudo Intellects’ “Resourceful Illery” attempts to prove that although simplicity is long forgotten, being able to revert back to the basics is more complex than anything.

The roughly forty five minutes of “Resourceful Illery” are filled with a multitude of jazz, soul, samples and a more unconventional approach to hip hop as they fully utilize the terms “resourceful” and “illery,” In the liner notes, Pseudo Intellectuals express that in order to be resourceful they had to take advantage of every source readily available. With this in mind, they opted to save some money on vocalists and instead, used Tone’s children on various tracks. When first hearing the album, I too was confused about the childrens’ voices, but upon reading up on who the voices were, it all made sense. The idea to use their voices is pleasant as it introduces a sense of simplicity and purity as seen in the title track as Tone’s daughter, Bella, says, “Resourceful Illery. We don’t even know what it means, but the Bell has good ideas.”

With a strong cello instrumentation to summon “No Money, Mo’ Problems,” Pseudo Intellects somewhat mocks the popular Notorious B.I.G. hit “Mo’ Money, Mo’ Problems” and show that no money causes the same amount of problems. Incorporating the sampled Diana Ross’ “I’m Coming Out” that was also featured in “Mo’ Money, Mo’ Problems,” Pseudo Intellects brings to light that the struggle definitely exists on the other side of the tracks as a sampled verse of ” I’m living in a city where life is such a pity” reverberates throughout the track. DJ Cutler debuts his rapping skills on “No Money, Mo’ Problems” as he lets his audience get acquainted with his rhymes of “Keep jazz on wooden shelves and wooden shelves on cinder blocks. Resourceful got a course load of that style from my pops.” Tone’s kids are re-introduced in the track as they speak the truth that “More money, more problems? That’s the most ridiculous thing I’ve ever heard.”

As the rap game and the struggle as an emcee are choice topics for many for many hip hop groups, Pseudo Intellectuals also attempts the same, but instead, does it in a distinctive manner. With its heavy jazzy bass and drums, “Lullaby of Lyndale” emphasizes the desire for perfection in the rap game. It is clear that the fervor for rap is undoubtedly existent with Pseudo Intellectuals as they devote a whole track to rapping itself. In a clever way with the use of various samples, “If On a Winter’s Night a Rapper” is an instructional track of how to rap. An announcer’s voice commences the track as he speaks about some type of sport, but instead of talking about the sport, another sampled track with the sole word “rapping” replaces the sport named. The creativity in the track is endless with the on point sampling and when it is all put together, “If On a Winter’s Night a Rapper” is a humorous way of showing the passion for rap. As the Pseudo Intellectuals’ lyrics begin, they explore the reason for rapping even further as the sampled track runs in and out throughout the track, often beginning rhymes or ending them. It definitely puts it into perspective that rapping is as close to a sport as it can be as it takes skill, patience, and training as they say:

“…Sometimes it just flows even when my mind is cloudy
Drop the mic
That’s a no no
Don’t say ‘homo’
But curse as much as possible
Or your album will drag…
Spend nights diggin’ through curbs, crates, smuggle with tyrants
Recording mic checks to become the next struggling artist
You don’t have to be the smartest
Or the best dressed to be raw
Just be sure you give us tight rhymes…”

Pseudo Intellectuals continue their imaginative rhymes in “The Impudent Date Rap” as the title alone explains it all. Incorporating the common track in many albums about women, Pseudo Intellectuals take it to another level as they imagine how rhymes alone can win over their prospective lady and eventually have them going home with you. In this slow, funk driven track, Pseudo Intellectuals visualize a humorous scenario as a woman is drawn in by mere rapping skills as they show:

“Listen to the rhyme
It’s a rap date fact
Percentile rate of date rap is phat
This much is true to the reason that you’re writing
Said yes to the date so I think that she’s inviting
If she’s not inviting, then you gotta mack
If she still says no, then it means you gotta rap…
I’m not the type to just date rap
I’m a bit shook that I’ll find another cat
Baby, baby, baby I can set the right mood
If I spit my raps tight I’ll get your underwear removed”

Pseudo Intellectuals is a group like no other. Their vast imagination and originality, use of minimal equipment, and strong production surpasses many existing underground tracks. Slightly reminiscent of one of my more favorite groups, Typical Cats of Chicago, Pseudo Intellectuals keep their lyricism raw and to the point and although their rhymes were at times difficult to understand because of the speed of their delivery, they proved to excel nonetheless. With their endless humor and extensive lyrical skills, Pseudo Intellectuals have clearly shown that their intellect goes beyond the realm of ordinary hip hop. They call themselves Pseudo Intellectuals, but in truth, there is nothing artificial to them at all as reflected by their music.